In paintings, Syrian artist shows the pain war has caused his country 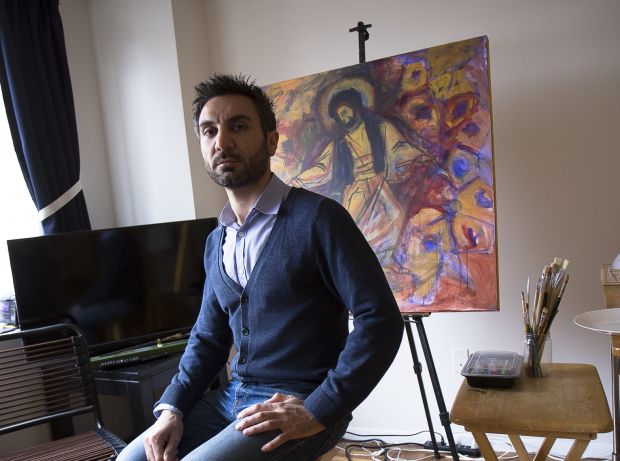 Essa Neima poses for a photo in his art studio in Washington. The Syrian artist said he got the idea to showcase his country's struggles after extremists killed a Jesuit priest friend there. (CNS photo/Tyler Orsburn)

At a recent exhibit, his oil on acrylic works ranged from depictions of damaged church and mosque mosaics, to a broken icon of Mary and a refugee woman forced into servitude by the need to survive.

Most of the paintings were strewn with the deep red color of blood.

“It is like treasure … covered by blood because (of) what’s happening now, the sad events happening in Syria,” Neima told Catholic News Service in Washington, thousands of miles from his country, where conflict has killed nearly 200,000 people and dispersed about 10 million others, according to U.N. estimates.

Neima said the exhibit began with a dream he had in 2014, soon after learning that his friend, Dutch Jesuit Father Frans van der Lugt, 75, had been killed by extremists in Syria. The dream was filled with writing and a human eye, which Neima interpreted as signs he should inform people outside Syria of the toll that the war was taking on his country’s ethnically and culturally diverse communities.

“After I lost my friend, Frans van der Lugt, I had the dream that there (are) quotes and patterns and a lot of drawing on a cave wall, and what I remember exactly (is) the wise, sad eye that was looking at me like blame, as if I should share this message,” he said.

This led to “Syrian Iconoclasm,” the first of the exhibit’s 12 paintings, which Neima described as “the heart” of his spring show, titled “Touch Me Not,” at Washington’s Presbyterian Church of the Pilgrims. 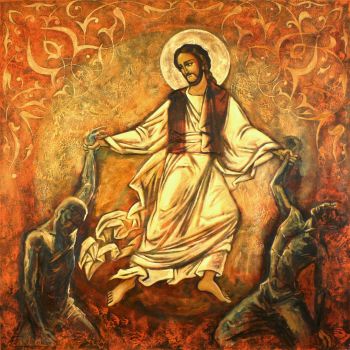 He said he took the exhibit’s title from John 20:17, where a risen Jesus appears to Mary Magdalene and stops her when she reaches toward him.

“He wanted her to respect his new situation. In my art show I want to represent all the disrespected people and the art damaged by the violence and say ‘Touch me not,'” said Neima, who was raised Catholic and whose first name — Essa — is Arabic for “Jesus.”

“Syrian Iconoclasm” depicts at its center a human eye, surrounded by patterns found in Syria’s ancient mosques and churches. An icon of Mary sits in the lower right corner, damaged and surrounded by blood.

“I tried to show the history of Syria, what patterns you see in mosques and churches and cathedrals and even in the old ruins and old historical places … and the fear of losing it,” Neima said.

Another painting, “Forced Freedom,” shows a wide-eyed, heavily made-up woman, with bare shoulders and long flowing red hair, in reference to what Neima lamented were Syrian mothers, daughters and wives fleeing the war and sometimes forced into situations over which they had no control.

“They are forced to leave the country … and to go to Jordan or Lebanon, and they had to work in certain kind of jobs, or maybe get married” to men they did not choose, he said.

A bluish painting stood out among the rest of the exhibit’s mostly red. In it, a kneeling figure asks for the forgiveness Neima said was imperative to ending the Syrian conflict, now in its fifth year.

“Blue usually (is) the color of the sadness in the art, so I am making it like blue forgiveness. I am trying to express making peace with yourself and the past and forgiving the people (who) hurt you in the past,” he said, emphasizing that the only position he held toward the war in Syria was “just stopping the violence (and) seeing people … live safe again.”

He said he hoped his paintings would encourage more Americans to stand up against the war and to learn more about Syria’s rich heritage and culturally diverse society, often overlooked in U.S. news outlets, which he claimed were simplifying his country’s conflict.

“My message from this art show (is) to be a little bit optimistic about the situation and see things you don’t see it in the media,” Neima said.

“If I will watch (U.S.) media … I see just three parties: There is a government, there is a free army and there are the extremists, and you think that there (are) just three parties and they are killing each other. The reality is there (are) a lot of people (who) care just to live peacefully. They just want their life to be safe, or they want to raise kids, or to have jobs, like the normal life.”

But even Neima seemed hard-pressed to understand how a conflict so violent could erupt in multicultural Syria, where he said he counted many friends from among the Arab country’s predominantly Muslim population.

“The Syrian society, when I was living there, was … a liberal society. It wasn’t like I support the extremists because I am Muslim, or like because I am Christian I will belong to so and so … there was not this category,” Neima said.

He said he had lived in Washington since 2012 and was teaching art at the University of the District of Columbia, but wanted eventually to return to Syria, where his parents and seven siblings still live, “when the conflict is over” and “everyone there accepts the other … and lives in peace.”

NEXT: Baltimore prays for peace, progress in addressing systemic injustices