Looking for parish-based services? Yeah, there’s an app for that 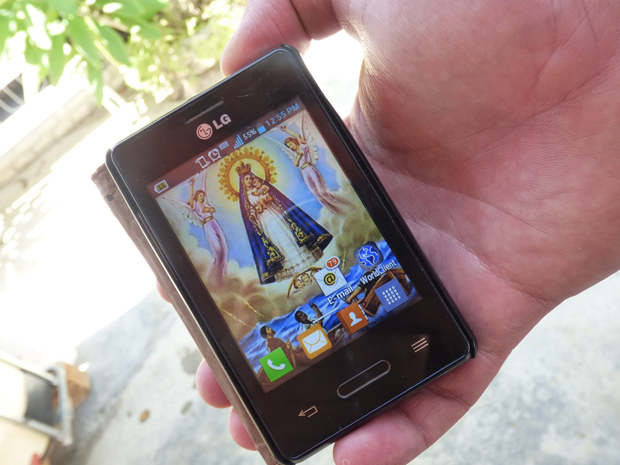 A cellphone screen displays an image of Our Lady of Charity of El Cobre, patroness of Cuba, in early March. (CNS photo/Rhina Guidos)

WASHINGTON (CNS) — In an increasingly mobile and digital world, Catholic parishes and other institutions are finding that the ubiquitous mobile app can work for them.

More parishes are going the app route, and more companies are tailoring their business for the church trade. Among the app developers are thechurchapp.org, churchapplady.com and Catholic Parish Apps.

Edmundo Reyes, founder and CEO of Catholic Parish Apps, told Catholic News Service that since his venture opened for business less than a year ago, he has gotten 65 parish apps off the ground, has another 75 or so in the works, and has secured contracts for the 70-parish Diocese of Orange, California, and the 213-parish Archdiocese of Detroit, where he doubles as director of institutional development for the archdiocese and its seminary.

“Not all of them are going to get the app, but a number of them will,” said Reyes, whose company’s site is parishapps.com.

“We wanted to found a company that would really be at the intersection of technology and ministry,” he added. “We want things for the parish to be easy to use. We want our app to be flexible. Each parish is different, each ministry is different.” According to Reyes, parishes are interested in at least one of three things, based on how the pastor perceives his ministry: communication, collaboration and evangelization.

He referred to a 2013 survey conducted by the Detroit Archdiocese that garnered 44,000 responses. When asked how they got connected to their parish or the diocese, “95 percent of the people said the bulletin. Below them was the vicariate newsletter, and the thing about it is that the newsletter is included in the parish bulletin,” Reyes said. “The parish website and parish email efforts were only 45 percent. Now that’s a big gap between 95 and 45 percent.”

Pastors “don’t know the app, or what the app would do,” Reyes said. “It’s a great tool. If you don’t know what the app will do in the beginning, get out there and then build it as you go.”

One early adapter was Nativity Parish in Timonium, Maryland, a Baltimore suburb. It launched its app in September 2012, and secured 2,000 downloads quickly, according to Mike Hamilton, information technology director for the 4,000-household parish.

Currently, there are 4,200 registered users, gaining 100 to 200 new ones each month, and two-thirds of them open the app at least once a month, Hamilton told CNS.

“The app allows people to check out basic information about Nativity such as service times and where we are. It has a map so people can come and check us out that way,” Hamilton said. “There’s some more in-depth information about some programs like our kids and teen programs.”

Weekend Mass announcements are posted. “We also put our pastor’s messages on the app as well. We break down our messages in series so over the course of four or six weeks we can have a series of messages,” Hamilton said. Nativity has since taken to broadcasting its Masses for viewing via the app, which also links to the pastor’s blog.

Holy Spirit Parish in Dubuque, Iowa, after nearly eight months of development, unveiled its app on Easter, and got 119 people to download it right away.

“It’s a tool for collaboration in the parish and it’s a tool for the new evangelization,” said Brandon Kuboushek, a member of the parish evangelization committee. “We want people to use it to get more information, get questions answered about the parish. We also hope people walking down the street will download it and it’s a way to evangelize. People are being bombarded with media all the time. This is a way to use that new technology.”

Kuboushek spent over 40 hours volunteering, working with members of the committee and parish officials to get the app off the ground.

“We did this based on how can we get the attention of younger people or anyone who has gone away from the church; (we thought) ‘what are some ways we can appeal to them?'” Leslie Foley, another member of the evangelization committee, told The Witness, Dubuque’s archdiocesan newspaper.

Signs with the app’s “QR code” are hung outside the parish’s three church locations. People can get information on the app by scanning the code with their smartphones. It also has been promoted during Mass announcements and in the parish bulletin.

Parishioners at St. Mary Church and School in Paragould, Arkansas, can now get more updates about activities and Masses via an app for their smartphones.

According to Father Mike Sinkler, the pastor, there are currently a little more than 100 people who signed up for the app in the short time it’s been available. “Through the app, you can get push notifications from the parish and school office, scheduling for Masses and ministries, connection to Catholic News Service and many other ways of getting more church information,” he told the Arkansas Catholic, newspaper of the Diocese of Little Rock.

The developer of the app is Sue Jiron of SmartDogIntegration in New Mexico. According to her website, churchapplady.com, the organization is committed to bringing the Catholic Church into the digital era with the latest in information technology.

And in west-central Arkansas, nobody has to raise their voice to get the free Yell County Catholic smartphone and tablet app. Jiron helped a couple of parishes there with an app in the beginning of 2014. The cost to set it up was about $1,300 and about $75 a month to maintain.

Father Rob Clements, director of the All Saints Catholic Newman Center at Arizona State University in Tempe, has seen students consulting the “Mea Culpa” app in confession. Available on iTunes, the app guides penitents through an examination of conscience, displays prayers before confession, and categorizes and keeps track of sins.

Not to be outdone by its rival, the University of Arizona’s Newman Center unveiled its own app May 2.

Then there’s iBreviary, replacing the hefty leather-bound volumes of the Liturgy of the Hours. It’s a must-have, Father Clements told The Catholic Sun, newspaper of the Diocese of Phoenix.

St. Anne Parish in Gilbert, Arizona, has a free mobile app available for Android, Apple and Windows devices. Users can keep up to date with the latest news and updates of the parish as well as, in the parish’s words “the latest homilies by your favorite priests.” The app also includes the latest Twitter quote from Pope Francis.

The app has scored a perfect 5.0 in Google Play’s reviews section — but then, it’s had just one review.

Contributing to this story were Dan Russo in Dubuque, Zita Taitano in Jonesboro, Dwain Hebda in Little Rock and Ambria Hammel in Phoenix.