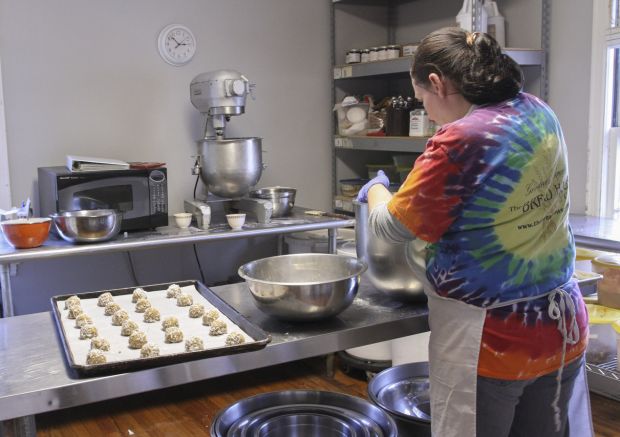 A GraceWay resident works April 10 at The Bread House & Granary, an all-natural bakery three miles from the recovery residence in Albany, Ga. GraceWay is a home for women working to overcome an addiction. (CNS photo/Michael Alexander, Georgia Bulletin)

ALBANY, Ga. (CNS) — Struggling with alcoholism, Regina knew she had to get “re-centered” with God to help with her addiction.

A Catholic from Atlanta, Regina had been convicted of her second driving under the influence offense and the court ordered her to enter rehabilitation as part of her sentence.

So she turned to GraceWay, a faith-based addiction recovery program started 29 years ago by Debbie and Tim Mazur, parishioners of St. Teresa Church in Albany.

It was the faith component of GraceWay that attracted Regina, a mother of two sons. She was admitted to the program in October 2013 and stayed 31 days.

For Regina, who asked only that her first name be used, the program was a “steppingstone” in recovery.

She was craving a lot of quiet time for prayer but also found a lot of work at GraceWay, where part of recovery for some residents is bread-making in its bakery.

“You do a lot of cleaning and cooking and a lot of meetings,” she said.

During less-structured time, she would pray the rosary.

Instead of the Serenity Prayer, the women would pray the Hail Mary each evening. At the time, Regina was the only Catholic at the residence.

Regina’s stay at GraceWay was not a cure-all. “It was the first step,” she said.

“I’m in recovery,” said Regina, now back in Atlanta.

GraceWay’s clients are women 18 and older. Some stay for a month of initial treatment, but they can stay up to 18 months. Sober living apartments, The Way, are next door to the residence for long-term recovery.

Regina has found that receiving the sacraments, including attending healing Masses, is important to sobriety.

“I kind of wish there was more,” she said about the church’s role in ministering to those with addictions. “It’s mind, body and spirit. It’s not just a physical thing.”

A book by Cardinal Justin Rigali, “Let the Oppressed Go Free: Breaking the Bonds of Addiction,” has helped Regina.

“It is about addiction from the Catholic perspective and the mercy the church offers.”

Family support also has been important. Regina has been open with her children, knowing that a lot of mothers will not admit they are addicted to alcohol or drugs.

Located in the historic Denison House, GraceWay is not affiliated with a particular religious denomination. A white picket fence surrounds the dollhouse-like home, giving no clue to the struggles taking place within.

GraceWay’s residents are dealing with substance abuse, or eating and cutting disorders, and learning the tools needed to stay sober.

The treatment program uses the 12-step methodology of Alcoholics Anonymous, which is spiritual in nature.

Debbie Mazur knows firsthand about recovery. She was ordered by a court to undergo alcohol treatment 29 years ago. “You never forget what it’s like to live in this darkness,” she said.

People who don’t struggle with addiction “can’t possibly understand the suffering,” she added.

Mazur opened the nonprofit GraceWay in 2003 as a way of giving back and calls it the “toughest program in the state of Georgia.”

The program is based on the concept that the best hope for sobriety comes from directing one’s life toward the divine.

“It’s a beautiful thing to witness,” Dixon said. “His (God’s) restorative power is what transforms lives.”

Prescription drug abuse has morphed into an epidemic in Georgia, Dixon explained. People start taking pain medicines prescribed to them, become addicted, and then turn to less expensive drugs on the street.

“It often ends up in a disease state. It robs them of their health,” she said.

“It was a totally unmet need,” she added. “That’s why there is a GraceWay.”

Sitting in her office across the street from the GraceWay residence, Dixon said the Catholic parish in Albany and the community in general have been supportive. The home is consecrated to Our Lady of Grace.

The Knights of Columbus helps GraceWay through local and state fundraising efforts.

Father Paulinus Okpala, parochial vicar at St. Teresa Church, visits weekly to offer spiritual guidance, as do other clergy in the community.

“Everyone over there has suffered some kind of major trauma,” Dixon said. The most common suggestion among the women is, “Have you prayed about it?”

Each day, the women have six hours of individual, group and peer-to-peer counseling. They take part in exercise, nutrition classes, anger and stress management, and life skills classes.

Of the 21 women treated at GraceWay’s residence in 2014, 19 remain sober. Thirteen of those women have marked one year of sobriety. One-third of the women qualified for indigent care.

When walking through the front door of GraceWay, the quiet is striking. GraceWay’s chapel has a table of photos of women who died from addiction, a constant reminder of the ultimate consequence.

A picture of Sister Mary Ignatia Gavin, a Sister of Charity of St. Augustine, hangs in the entryway.

Mazur modeled the program upon the work of Sister Ignatia, a co-founder of Alcoholics Anonymous who established treatment wards for alcoholics in Ohio. She was key in the recognition of alcoholism as a disease and also helped implement Al-Anon programs for families of the addicted.

Mazur won the 2014 Sister Ignatia Gavin Award from the National Catholic Council on Addictions. She was the first layperson to receive the award in its 65-year history. The award is presented annually to individuals who have had a major impact in the field of addiction recovery.

Mazur recalled that after returning home from treatment years ago, she had little support.

“It was very hard,” she admitted.

While in treatment, a volunteer mentor, nicknamed the “Cookie Lady,” befriended Mazur.

Years later, the same woman attended the GraceWay open house and while talking they became aware of their previous connection.

“It was like God confirming. You can pull this off,” Mazur said.

Shannon Burke, program director at GraceWay, is also one of its graduates.

Burke is a certified addictions counselor and is working toward a degree in social work. She went through the program four years ago, spending several months in the residence, and then moved to The Way sober living apartments, staying for more than a year.

Raised attending Catholic schools in Alabama, Burke started using alcohol and marijuana while in middle school. “I was a really good student,” she recalled.

Suffering from manic depression, Burke said alcohol was just a “Band-Aid.” Sometimes it seemed easier for her to continue to use drugs instead of getting help because it was the life she knew.

“I believe we’re just wired differently. I do believe it’s a disease,” she said.

Burke initially sought treatment elsewhere, but her parents began searching online for something better suited for her when they came across GraceWay.

“This worked out so much better for me,” she said. “I just had a peace.”

Living her Catholic faith has been key in Burke’s recovery.

Burke’s family is very proud of her recovery efforts.

Frequently receiving the Eucharist is vital as well. “Our life just depends on it,” she said.