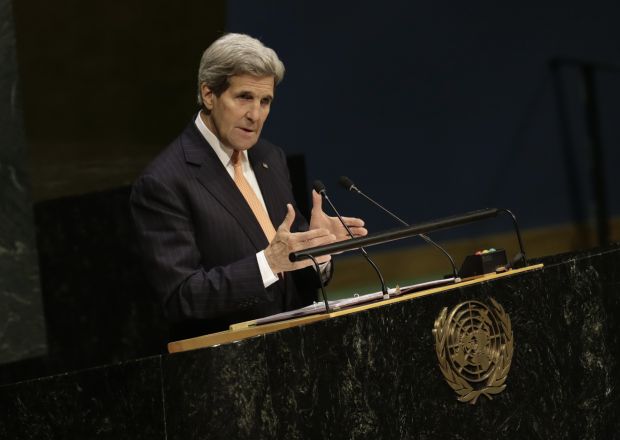 U.S. Secretary of State John Kerry speaks during the Ninth Review Conference of the Treaty on the Non-Proliferation of Nuclear Weapons at the United Nations in New York April 27. Catholic peace advocates expressed disappointment with the lack of progress during the conference to shrink the arsenals of nuclear weapons-possessing nations. (CNS photo/Peter Foley, EPA)

WASHINGTON (CNS) — A monthlong review of a key nuclear weapons treaty saw the nuclear powers stepping back from an opportunity to alter the status quo, much to the disappointment of Catholic peace advocates.

The disappointment stems from the failure of the nuclear weapons states to heed the arguments of the advocates, nongovernmental organizations and non-nuclear nations on the moral imperative to more rapidly shrink weapons stockpiles because of the threat they pose to humanity.

“Just the lack of political will all the way around, it’s discouraging,” Bishop Oscar Cantu of Las Cruces, New Mexico, chairman of the U.S. bishops’ Committee on International Justice and Peace, told Catholic News Service May 26, four days after delegates from more than 150 nations concluded the Ninth Review Conference of the Treaty on the Non-Proliferation of Nuclear Weapons at the United Nations in New York.

Perhaps sensing a lack of progress during the conference, Bishop Cantu, sent a letter to Secretary of State John Kerry May 12 calling him to step up efforts to ensure the credibility of the treaty lest there be “catastrophic consequences for all countries and for the future of humanity as a whole.”

However, the conference ended without a final statement being issued, signaling a step back from the minimal progress toward the abolition of nuclear weapons at earlier review conferences, said Jesuit Father Drew Christiansen, distinguished professor of ethics and global development at Georgetown University.

“The fact that there hasn’t been any (agreement) the last two conferences means that the binding power of the (treaty) is weakening,” he said.

The conference got hung up near its end as the draft of a final statement was being discussed. The United States, joined by the United Kingdom and Canada, rejected a draft resolution from Egypt that had the backing of the majority of participating nations calling on Israel to dismantle any nuclear weapons it may have as a step toward a weapons of mass destruction-free Middle East.

Israeli leaders have neither confirmed nor denied that the country possesses nuclear weapons.

In a statement from the floor the final evening of the conference, Rose E. Gottemoeller, U.S. undersecretary of state for arms control and international security and a Catholic, announced there was “no agreement” and charged that Egypt and other Arab states were demanding “unrealistic and unworkable conditions” in the negotiations.

Without a final statement, nuclear-armed states will be able to keep their arsenals intact, much to the frustration of nations trying to rid the world of such weapons.

Bishop Cantu called for disarmament advocates to “keep pushing forward and encourage particularly our (U.S.) government to move forward to fulfill the treaty.”

“There’s a moral need for (nuclear) disarmament,” he said. “Unfortunately, nobody’s moving on it.”

He suggested that if Americans better understood the security dangers and enormous social and economic costs of maintaining a nuclear arsenal they might be motivated to join the call for abolition.

“It’s amazing just the general public, if you walk on the street, if you ask people about nuclear weapons, they’d say ‘No, that’s an old thing.” People assume that went away when the Cold War went away.

“If the public only knew how we spend on them and for what? This deterrence doesn’t make sense.”

Meanwhile, advocates for nuclear disarmament are not giving up on the goal of nuclear weapons-free world.

Marie Dennis, co-president of Pax Christi International, attended the conference during its first week. She told CNS May 27 that despite the setback, enthusiasm remains high among advocates to work toward worldwide disarmament.

She cited widespread support for the elimination of nuclear weapons that emerged in December during the Vienna Conference on the Humanitarian Impact of Nuclear Weapons.

“So many countries have expressed their insistence that we move beyond this extremely dangerous status quo,” she said. “I think it gives good impetus to the likelihood that we will begin to negotiate a (weapons) ban treaty.”

The Vatican made clear its stance in support of abolition at the Vienna conference through two statements, including one from Pope Francis.

“The time has come to embrace the abolition of nuclear weapons as an essential foundation of collective security,” the Vatican said in a paper presented at the conference.

The church held firm to its stance in the paper that any use of nuclear weapons was immoral and argued that the time has come to abandon nuclear deterrence — the principle that such weapons might be used and they exist to deter another country from using them. Previously, the Vatican conditionally accepted deterrence as a step toward “progressive disarmament.”

Sister Mary Ann McGivern, a member of the Sisters of Loretto who serves on her order’s Committee for Peace, joined the Pax Christi delegation at the treaty review conference, but came away feeling “there were no surprises.”

She has placed hope, instead, on the growing effort to build on the humanitarian message that emerged from the Vienna conference and explaining how the high cost of maintaining and upgrading nuclear arsenals harms support for health care, education and preserving the environment.

The disarmament call gained additional support as the U.N. conference ended from the Catholic bishops of Belgium. The bishops said they backed the Vatican’s stance on deterrence and quoted Pope Francis in calling for progressive disarmament on the part of the nuclear weapons nations.

“A peaceful society is not created on the basis of threats, fear or deterrence, event at the international level,” the bishops said.

“The ethical responsibility for the abolition of nuclear weapons lies not only with the countries that develop these weapons, produce and stockpile them, but also in countries that tolerate this. Belgium is part of that,” the bishops wrote.