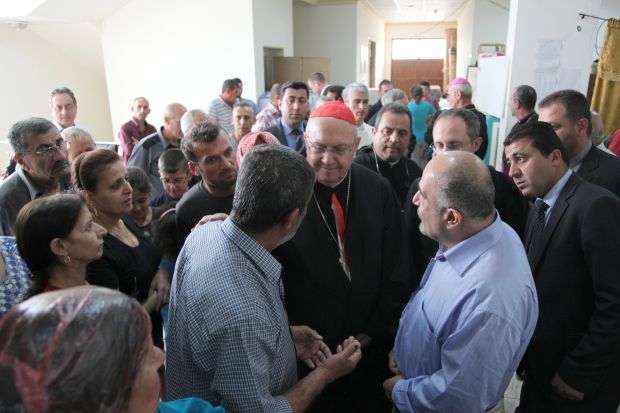 IRBIL, Iraq (CNS) — The head of the Vatican’s Congregation for Eastern Churches visited Iraq to convey Pope Francis’ blessing and concern for church officials and the displaced living and working in difficult circumstances.

In Dohuk, Cardinal Leonardo Sandri hugged children and comforted adults who expressed only one wish: to go back home. Pope Francis’ envoy left a few pictures of the pontiff that children held proudly, with large smiles. The displaced slept up to 20 per room, with baggage and cardboard boxes marking the space for each family. Carpets on the floor and an ever-running television were the only comforts for 60 families that share a few gas stoves and even fewer toilets.

At a Mass outside of a Syriac Catholic church in Irbil May 3, Cardinal Sandri told Iraqis who had fled from Islamic State militants that their “hearts and lives had signs of the violence, persecution and dissemination that forced many to abandon their house in the plain of Ninevah, in Mosul, in Bakhdida (Qaraqosh) and in other villages, to find a safe shelter.”

The Mass’ main celebrant was by Syriac Catholic Patriarch Ignatius Joseph III Younan, but Cardinal Sandri preached. In his homily, he spoke of the massacre of Assyrians by the Ottoman Empire a century ago.

“We remain speechless,” he said, “before this violence and aggression, but mostly because the human heart seems to have learned nothing from the dramas that shook the 20th century and that continue today while shedding more innocent blood with a blind and destructive blindness.

“Your pastors, the pope and the universal church fear a general exodus from lands that have been Christian for 2,000 years,” he said.

Before going to Irbil, Cardinal Sandri spent three days in Baghdad, where he met with Iraq’s president and prime minister. Iraq without Christians would not be Iraq anymore, Prime Minister Haider al-Abadi told him, echoing Pope Francis’ recurring declarations about the Middle East. President Fuad Masum told the cardinal he hoped the pope would visit as soon as the situation will allow it.

In Irbil, Cardinal Sandri met with about 10 members of ROACO, a coalition of funding agencies coordinated by the Congregation for Eastern Churches. Among them were the heads of French and German agencies as well as Aid to the Church in Need, the Holy Childhood Association and the Catholic Near East Welfare Association. During the two days prior to that meeting, members of ROACO visited many camps with displaced people, trying to evaluate their needs.

Msgr. John Kozar, head of Catholic Near East Welfare Association, told Catholic News Service that water is the “single most important reality” and is always in short supply.

“Even in the midst of extreme poverty and the complete lack of privacy and personal or family space, the refugees were so loving, welcoming and filled with gratitude and hope,” he said. “Some who had no kitchen or running water humbled us by offering us tea.”

During a meeting with the displaced in Ankawa, one man told the agency heads: “The only thing we want is to go back home.”

Then a girl named Tamara, 12, told them with a radiant face: “ISIS took everything, but we still have our faith in Jesus Christ, and they will never take it.”

Last summer, in the face of advancing members of the Islamic State group, more than 100,000 Christians were forced to flee their homes on the plain of Ninevah to reach Irbil and other places in Iraqi Kurdistan. Prefabricated buildings have now replaced the tents hurriedly installed last year. Some displaced people have sometimes been received in improvised lodging, often sharing a few square meters.

Schools, kindergartens and clinics were progressively set up, and life was reorganized in the camps, including on a spiritual level. Displaced with the faithful, priests have continued to spiritually nourish their communities, just like many Iraqi Dominican sisters, especially in welcome centers.

Despite Iraq’s and the Kurd autonomous government’s support, and despite international solidarity through aid agencies, housing conditions remain difficult. Besides insufficient water, the electrical network is unstable and, this summer, temperatures could climb up to 122 degrees Fahrenheit.

Cardinal Sandri told the bishops in Irbil that he was impressed with “the heroic dedication of the many priests who are truly good pastors, who do not flee and who stay beside their flock; I have been moved by the profound communion that precedes any theological discussion — although the latter is necessary — and any other form of ecumenical agreement, when priests of different Christian churches wish well to each other and, along with the laypeople, organize aid activities for displaced persons, or guide educational paths in schools and parishes. It is also good to see the collaboration that the various agencies of the ROACO have offered in the planning and implementation phases for the good of all of you.”

NEXT: Europe needs Christians to speak with one voice, pope says