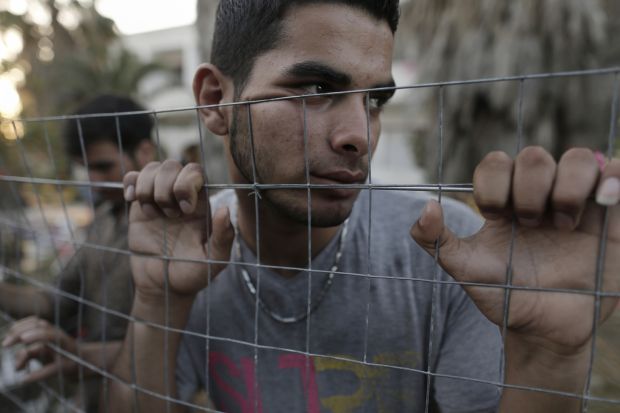 An Afghan refugee stands behind a fence at the yard of an abandoned hotel on the island of Kos, near the sea border with Turkey and Greece, May 6. (CNS photo/Yannis Kolesdis, EPA)

RHODES, Greece (CNS) — Migrants pay thousands of dollars to human traffickers in countries like Turkey and Libya to ferry them to what they hope are the greener pastures of Europe. The growing crises in places like Libya allow traffickers to work almost unobstructed.

As the warmer weather once again brings on the start of the smuggling season, Europe is still struggling to come up with a humane response that will not be seen as encouraging the phenomenon.

Mare Nostrum, a yearlong Italian naval operation in the southern Mediterranean, which, according to European Council on Refugees and Exiles, saved more than 140,000 people, was canceled in 2014 partially because of budgetary constraints but also because of strong domestic opposition to the operation, which some believe could be encouraging more migration. It was replaced last November by a smaller EU mission, both monetarily and mandate-wise, apparently resulting in a more deadly journey for the refugees.

The International Organization for Migration put the death count for refugees at sea from January through early May at 1,829 people, compared to 207 at the same time last year.

Last year, 3,300 migrants died trying to enter Europe by sea, according to the organization’s statistics.

On May 7, the Italian authorities reported having found a damaged vessel sunken off the northeast Libyan coastline, which is believed to have gone down with as many as 800 passengers inside.

The International Organization for Migration estimates that, by May 19, more than 38,000 migrants had reached Europe this year. According to their data, the majority of refugees are coming from Eritrea, Ethiopia, Somalia, Nigeria, Gambia and Syria.

In a statement, the organization said its team in Italy is noticing a continuing trend of growing numbers of African women, particularly Nigerians, many of whom they believe are being trafficked into the sex industry.