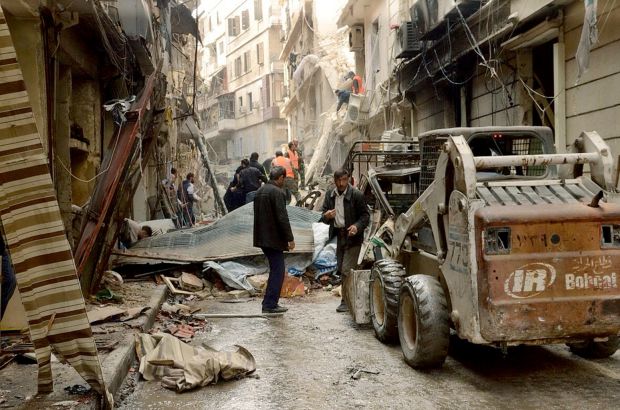 The bishop, who is president of the church’s charitable agency, Caritas Syria, left the country for a few days to attend the general assembly of Caritas Internationalis in Rome May 12-17.

Daily life “is becoming more and more difficult and tiring,” he told Catholic News Service. When the fighting first began in 2011, he said, the people of Aleppo held up well because the danger zones were far away.

“Now our situation is very bad, very difficult,” he said. “We are without electricity, without (running) water.”

“Something like 80 percent of people in Aleppo are without jobs. So they don’t have any money to survive,” the bishop said.

“We have everyday bombings,” he said. “I can have a bomb on my street, my cathedral, my bishopric, on the schools. We don’t know why and where,” but it happens every day.

“Those incidents spread trouble and fear, and the Christians living in Aleppo” are trying even more desperately to immigrate to the West, he said. “This is really something very sad for us” since Christians have been present in Syria since the time of the apostles, he added.

Aleppo used to be home to 150,000 Christians belonging to various Catholic rites, Orthodox churches and Protestant communities, he said. “I can say 100,000 left.”

Bishop Audo said he worries that in the future, the only Christians remaining in Aleppo will be “the poor people, the elderly people.”

Over the past two months, he said, the people seem to have been losing all hope for an end to the war and the beginning of reconciliation. Bishop Audo admitted that he, too, used to talk about his hope, “but now I have a tendency to say I am in an attitude of faith. I try to maintain myself in my faith as a Christian to continue and stay day by day, hour by hour. But for the majority of people, especially in Aleppo, they (are) losing any hope.”

Almost everyone would leave if they could, he said.

For centuries, Syria has been a country where Christians and Muslims coexisted, he said. And in the midst of war, suffering and poverty, “I can give a testimony of the admiration of Muslims toward Christians. They are discovering how the Christians are working, involved, how the Christians love their country.”

“Even in the war, if you have money you can always buy food” and clothing, he said. “As Caritas, we are well organized, and we have our partners around the world supporting us.”

The war, he said, “is not a problem between Christians and Muslims,” even if the media can make it appear that way. In reality, the war is a power struggle between the Sunni majority and the “minority of Alawites, who had the power in Syria.”