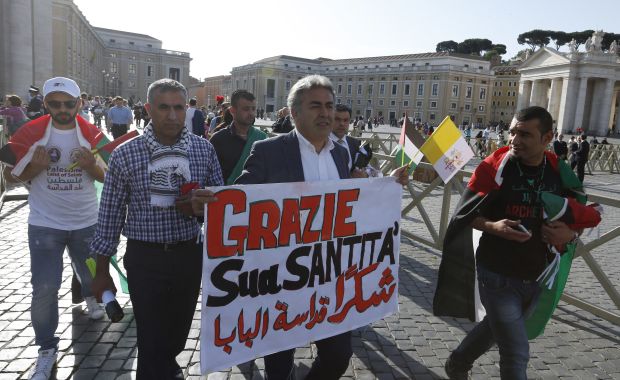 VATICAN CITY (CNS) — Declaring four 19th-century women religious saints, Pope Francis said they are models for all Christians of how faith, nourished in prayer, is expressed concretely in acts of charity and the promotion of unity.

Palestinian President Mahmoud Abbas was present at the Mass, as were Melkite Patriarch Gregoire III Laham and Latin Patriarch Fouad Twal of Jerusalem.

Abbas had a 40-minute private meeting with Pope Francis the day before the canonization Mass. The Vatican said the two expressed pleasure that their representatives had finalized the text of an agreement on “essential aspects of the life and the activity of the Catholic Church in Palestine, to be signed in the near future.”

They also spoke about the need for a resumption of direct talks in the Israeli-Palestinian peace process, the Vatican said. “Finally, with reference to the conflicts that afflict the Middle East, and in reaffirming the importance of combating terrorism, the need for interreligious dialogue was underlined.”

Pope Francis gave Abbas a medallion depicting the “Angel of Peace” and said he hoped Abbas would be that angel of peace for his people.

Peace and understanding were also key elements in Pope Francis’ homily during the canonization Mass the next morning.

Speaking about St. Mary of Jesus Crucified, the pope said, “Her docility to the Holy Spirit made her a means of encounter and fellowship with the Muslim world. So, too, Sister Marie-Alphonsine Danil Ghattas came to understand clearly what it means to radiate the love of God in the apostolate, and to be a witness to meekness and unity. She shows us the importance of becoming responsible for one another, of living lives of service one to another.”

The faith of Christians today, the pope said, is firmly linked to the testimony of the Apostles who witnessed the resurrection and to those who have passed on the faith through the centuries.

“Like the apostles,” he said, “each one of Christ’s followers is called to become a witness to his resurrection, above all in those human settings where forgetfulness of God and human disorientation are most evident.”

Pope Francis held a special audience May 18 with dozens of Rosary Sisters and Carmelites from the Holy Land, who had come to Rome for the canonization.

“Pray to the two new saints for peace in your land so that this interminable war would end and there would be peace among nations,” the pope told them. “And pray for the persecuted Christians, those chased from their homes and land,” as well as for victims of “white-glove persecution,” those discriminated against because of their faith.

After reciting a Hail Mary for peace with the sisters, the pope remarked on their loud and lively exuberance.

“I’m very happy about this pilgrimage of sisters for the canonization of the new saints,” he said. “The president of the State of Palestine told me that he left from Jordan with a plane full of sisters. The poor pilot!”

The four women saints, the pope said in his homily at the canonization Mass, were shining links in the chain of witnesses to Christ’s resurrection, offering their testimony not primarily through their words, but through their actions of love.

“This love shines forth in the testimony of Sister Jeanne Emilie de Villeneuve, who consecrated her life to God and to the poor, the sick, the imprisoned and the exploited, becoming for them and for all a concrete sign of the Lord’s merciful love,” he said.

St. Maria Cristina Brando, he said, “was completely given over to ardent love for the Lord. From prayer and her intimate encounter with the risen Jesus present in the Eucharist, she received strength to endure suffering and to give herself, as bread which is broken, to many people who had wandered far from God and yet hungered for authentic love.”

The witness of the four women, Pope Francis said, should prompt all Christians to examine the strength of their own witness to Christ. “How do I abide in him? How do I dwell in his love? Am I capable of ‘sowing’ in my family, in my workplace and in my community, the seed of that unity which he has bestowed on us by giving us a share in the life of the Trinity?”

NEXT: Church must listen to women, pope says