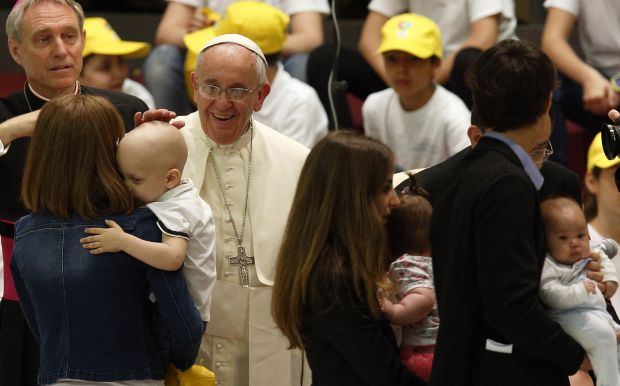 Pope Francis blesses a child during an audience with children from the Fabbrica della Pace group in Paul VI hall at the Vatican May 11. (CNS photo/Paul Haring)

VATICAN CITY (CNS) — Peace takes hard work and must be built one person at a time working each day by forgiving others, ending injustice and stopping greed, Pope Francis told elementary school children.

People also have to do more to stop condemning those who have made serious mistakes and instead help those who are incarcerated, especially juveniles, to start over and return to society, he said.

“It’s easier to fill prisons than help” them learn how to make better choices in life, Pope Francis said May 11 during a one-hour encounter with thousands of children, parents and educators taking part in an Italian initiative called “The Peace Factory.”

With the support of the Italian Ministry of Education and the Italian bishops’ conference, the initiative seeks to promote peace, tolerance and inclusion among the multiethnic, socially diverse and differently-abled children attending Italian elementary schools.

During the encounter a girl gave the pope a white safety helmet and a boy tied two bracelets with the initiative’s logo onto the pope’s wrists, making him “a special worker in the peace factory.”

Meeting in the Vatican’s Paul VI audience hall, the pope listened to a dozen elementary school kids asking him questions, including: why children suffer, why some powerful leaders choose war over peace, if the pope ever fought with his siblings, if he ever wanted some peace and quiet in his busy day and what if someone wanted to stay mad and did “not want to make peace with you? What would you do?”

“That’s a very good question,” he said. The only thing to do, he said, was respect that person’s freedom to think and feel the way they wanted. 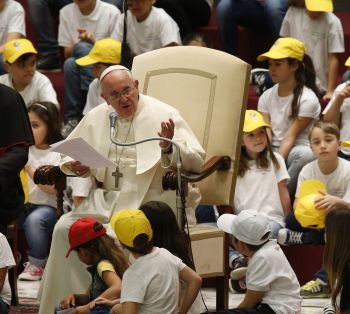 Pope Francis leads an audience with children from the Fabbrica della Pace group in Paul VI hall at the Vatican May 11. In English the group is called the “Peace Factory.” The initiative seeks to promote peace, tolerance and inclusion in Italian elementary schools. (CNS photo/Paul Haring)

“You don’t want to make peace with me, I did everything possible to do so, but I respect your choice. We have to learn respect,” he said. One should pray for that person and “never, never take revenge.”

The pope harshly criticized those who profit from wars being waged around the world.

An Egyptian boy asked why some powerful people do not help schools, but the pope said the question should be broadened to ask “Why do many powerful people not want peace? Because they live off of war: the arms industry,” he said, explaining how the industry will arm all sides in a conflict.

This highly profitable “industry of death” is driven by greed, which “is very harmful,” he said.

He said he knew an old priest who used to say, “The devil comes in through the wallet,” to explain the evil of greed, which is why those who profit from war don’t want peace.

The pope heard a question from a child whose father was serving time in prison and a boy who was being held in a juvenile detention facility. The boy asked if the pope agreed kids should be kept in jail.

“No, I do not agree,” he said. People need to help those who make mistakes pick themselves back up “with education, with love, with being close.”

Prison is the easy way out for society because it is a way “to forget about those who suffer,” he said.

Another boy asked why children come into the world with problems and suffer “when they have done nothing bad.”

The pope said he had no answer to that question. “One can only raise one’s eyes up to heaven and look for answers that can’t be found.”

However, people can do something by making sure society offers the needed medical support and by being close to them, he said.

One girl said she argued with her sister a lot and wanted to know if the pope had family squabbles, too.

He asked anyone who had never fought with a family member to raise his or her hand, and then he looked surprised at the large number of hands in the air. “Never ever? We’ve all done it! It’s part of life,” he said.

“I’ve had arguments many times, even now,” he said. “I get heated up a bit, but I always try to make peace.”

Because some conflict is inevitable, the thing to remember is to always end the day by making peace. If the problem had been caused by the other person, “I don’t say I’m sorry, but I can make a sign,” some kind of quiet gesture signaling there were no hard feelings left, he said.

When asked if he sought peace for himself given his hectic life as a pope, he said there was a difference between peace and tranquility.

“Often I’d like a little tranquility, to rest a little more. This is true. But being with people doesn’t take away peace. Yes, there’s a racket, noise, moving around,” he said. “It’s tiring a bit because one gets tired, I am no longer a young man,” he said.

But what robs people of peace is when there is no love, when there is “jealousy, envy, greed, taking things from others,” he said.

The pope told the children peace cannot be mass-produced, but is “a handcrafted product. We make it every day with our work, our life, our love, our closeness, our loving each other.”

PREVIOUS: Castro says pope is so impressive he might start praying again

NEXT: Work together to promote, defend life, pope says on Mother’s Day