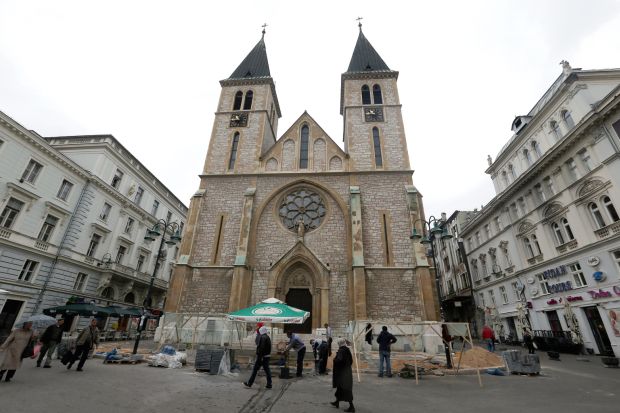 People walk outside the Cathedral of the Sacred Heart in late April in Sarajevo, Bosnia-Herzegovina. Pope Francis will meet with priests, religious and seminarians at the capital's cathedral during his June 6 trip to Sarajevo. (CNS photo/Fehim Demir, EPA)

VATICAN CITY (CNS) — Pope Francis’ concern for those suffering on the margins and for small Catholic communities that have kept the faith alive through war or repression will take him to Bosnia-Herzegovina in early June.

By making a one-day trip June 6 to Sarajevo, he said he hoped he could “be an encouragement for the Catholic faithful, give rise to the development of the good and contribute to strengthening fraternity, peace, interreligious dialogue and friendship.”

More than 100,000 people died and millions more were displaced during the 1992-1995 conflict, which saw a Serb campaign of ethnic cleansing of Bosnian Muslims after the mostly Muslim Bosnia-Herzegovina declared independence from Yugoslavia in 1992.

“Pope Francis is the pope of the poor and the forgotten, of those like us who live on the outer reaches” in a nation where peace is still fragile, and justice, especially for the Catholic minority, is a long way off, Cardinal Vinko Puljic of Sarajevo said in March.

The post-war Balkan nation is now largely divided along ethnic lines. Bosniaks, or ethnic Bosnians, make up 48 percent of the country’s nearly 4 million people, while Serbs make up 37 percent and Croats 14 percent. About 40 percent of all citizens are Muslim, 31 percent Orthodox and 15 percent Catholic.

Although the 1995 Dayton Peace Accords ended the fighting, the complex political structures the peace deal established — with one area administered by ethnic Serbs and another by a Muslim-Croat federation — meant the mostly Catholic Croat community became more vulnerable to discrimination, according to Bosnia’s bishops.

The peace-brokered constitution “sanctioned ‘de facto’ the principle of ethnic cleansing, that is, injustice and inequality,” the cardinal has said.

The accord sought to protect the rights of the three ethnic-religious communities by granting each group autonomy, which, in practice, actually entrenched segregation.

While some cities are multiethnic, their neighborhoods are not.

For example, in Mostar in the south, “there are Catholic youth who have grown up never having stepped foot” on the city’s famous 16th-century Ottoman Old Bridge “because it is in the Muslim part of town,” said Marc D’Silva, Catholic Relief Services’ Bosnia-Herzegovina country representative.

Pope Francis is expected to urge the minority Catholics to “go out,” cross cultural bridges and be a force for reconciliation and cooperation, as he meets with young Catholics at a diocesan youth center.

In his speech to Bosnia’s bishops in March, the pope said the Christian community is called to come out “from behind its ‘fence,’ firm in the faith, sustained by prayer and encouraged by its shepherds.”

Bishops are “fathers to everyone” in a multicultural world, the pope told them, and their hearts need to be “big enough to accept each person, as Christ’s heart knows how to take in every human being with divine love.”

That message will be especially fitting for this visit in June, which is dedicated to the Sacred Heart of Jesus, and for his meeting with priests, religious and seminarians in the capital’s Cathedral of the Sacred Heart.

People of all faiths in Bosnia “are excited” the pope is coming and know he is coming to support reconciliation, D’Silva told Catholic News Service in a telephone interview from Sarajevo.

While many people suffered during the war, they feel “no real bias or hatred” toward the other communities, he said. What they are lacking, he said, are constructive role models who encourage collaboration and cooperation.

“People aren’t getting positive reinforcement by influence leaders” in government and mass media, who tend to try to solidify their power by sowing division or at least by “not promoting reconciliation,” he said. The pope will have an opportunity to address those concerns during a meeting with government leaders and an encounter with religious and civil leaders at a Franciscan-run student center.

While the war drove many — including half of the country’s Catholics — out of Bosnia, today the lack of opportunities, a troubled economy and a sense of political inaction have triggered another exodus, especially among the young.

Catholics are especially enticed to leave, D’Silva said, because nearby Croatia guarantees emigrating ethnic Croats “automatic citizenship,” which carries with it European Union citizenship, too. Many Catholics from outside Bosnia are expected to attend the pope’s Mass at Sarajevo’s Kosevo stadium.

Darija Sesar, a 23-year-old Catholic law student in Mostar told CNS that she and her Orthodox and Muslim friends see the pope’s visit as “a light for better times for Bosnia.”

Sesar said that just as St. John Paul II, visiting the war-ravaged capital in 1997, inspired the church with his call to not be afraid and open the doors to Christ, “Pope Francis is teaching us to open ourselves up to new energy and new ways,” too.

She said his presence will help Bosnians see beyond their ethnic-religious identities and become an encounter between “he and we” — a Bosnia as one united nation.

“He will break the borders within us,” she said.

The pope’s visit is “a big step, but I don’t want it to be everything. After he comes we have to work even harder” to try to build the country together, which is “one of the reasons why I think he chose Bosnia,” Sesar said.

By choosing to visit Bosnia, such admired and respected popes “showed how much they love us. This is inspirational,” she said, because it shows “how we should love each other, too.”

NEXT: Israel downplays media flurry over Vatican agreement with Palestine