Pope says parents must not exclude themselves from children’s lives 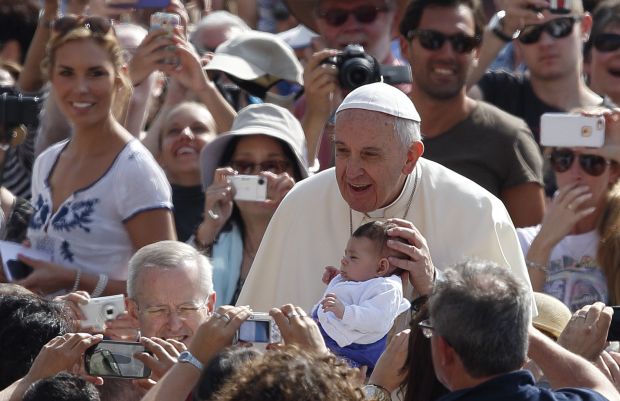 Pope Francis greets a baby as he arrives to lead his general audience in St. Peter's Square at the Vatican May 20. (CNS photo/Paul Haring)

VATICAN CITY (CNS) — Parents must not exclude themselves from their children’s lives and, despite what some “experts” may say, they must take an active role in their children’s education, said Pope Francis during his general audience in St. Peter’s Square May 20.

“It’s time for fathers and mothers to come out of their exile — because they have exiled themselves from their children’s education — and to fully assume again their educational role,” he said.

Continuing a series of talks about the family, the pope said its “essential characteristic” is its “natural vocation to educate children so that they grow in responsibility for themselves and for others.”

But, faced with numerous experts who tell them how their children should be raised, many parents have withdrawn their involvement in their children’s education, and this is “very grave,” he said.

“‘Critical’ intellectuals of all types have silenced parents in a thousand ways to defend the younger generation from the damages — real or imagined — of education in the family,” he said. “The family has been accused, among other things, of authoritarianism, favoritism, conformism and affective repression that generates conflict.”

“The educative partnership between society and family is in crisis because mutual trust has been undermined,” the pope said.

Tensions and disagreements between parents and teachers are a symptom of the crisis, he said, and children bear the brunt of it.

He also spoke of the multiplication “of so-called ‘experts,’ who have taken over the role of parents, even in the most intimate aspects of education,” convincing parents their only role is to “listen, learn and adapt.”

Parents then “tend increasingly to entrust to the ‘experts’ even the more delicate and personal aspects of their children’s lives, setting themselves off alone in a corner,” he said.

In trying to demonstrate how “things have changed,” the pope told a personal story about when he said a bad word to his fourth-grade teacher, who promptly called his mother. When his mother came to school the next day, she made him apologize to the teacher and then disciplined him when he got home.

Today instead, he said, parents will reprimand a teacher who tries to discipline their child.

The pope said it is obvious the current situation is “not good” or “harmonious,” since it tends to put families and schools in opposition rather than in collaborative relationships.

In addition, he said, “puzzled by the new demands made by children” and the complexity of life, many parents are “paralyzed by the fear of making a mistake.”

He urged separated parents to “never, never, never take a child hostage” by speaking ill of the other parent. He recognized that being separated is “a trial” but added that “children must not be the ones to carry the weight of this separation or to be used like hostages against the other spouse.”

The advice the apostle Paul gives to both children and parents in his Letter to the Colossians — that children obey their parents in all things and that parents not exasperate their children by “commanding in a bad way” so as not to discourage them — is “a wise rule,” he said.

To exasperate a child is to ask them to do things they are not able to do, the pope explained. Rather, children must be accompanied and “grow without being discouraged, step by step,” he said.

“Even in the best of families, there is the need to put up with each other,” he said. “But that’s life. Life is not lived in a laboratory, it’s lived in reality.”

“Wonderful” Christian parents “full of human wisdom” demonstrate that good education in the family is the “spine of humanism,” he said. Their “radiance compensates for the gaps, wounds and voids of fatherhood and motherhood” that many children experience, he added.

If families were able to recover their pride in being the primary educators of their children, he said, “many things would change for the better, (both) for uncertain parents and for disappointed children.”