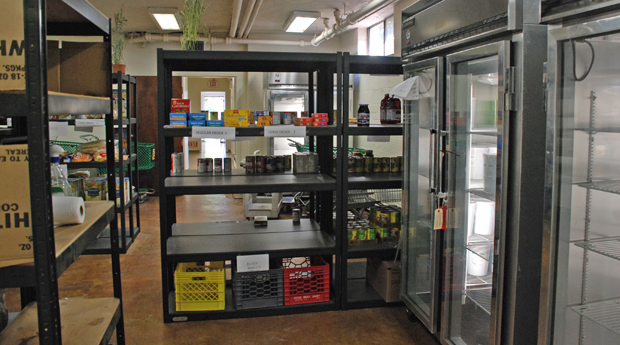 New refrigerators and shelves offering food items at the renovated food pantry at Catholic Social Services' Montgomery County center allow clients to choose the items they wish for their families. 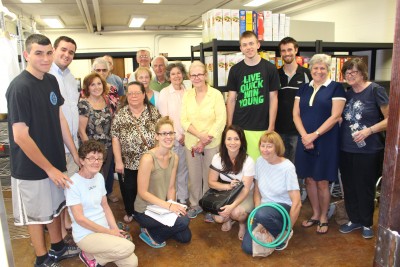 Hungry families in Montgomery County hoping to stretch their food budget now have the opportunity to choose the foods they want, just as though they were shopping in a store.

“The Choice model is just good common sense,” said Liz Peteraf, administrator of the CSS Family Services Center in Norristown, “giving people the opportunity to choose foods that fit their preferences and support their health, and in a way that promotes their dignity and is also more efficient than the old system.”

In just the few days since reopening under this new approach, Peteraf and Amanda Ruch, a staffer who  runs the day-to-day operations of the pantry, have observed how it fosters “people interacting with and engaging one another as persons, and tears down the walls between us as clients and staff or volunteers,” Peteraf said.

The new initiative at one of the largest food pantries in the region was made possible by the generosity of two major donors. The Federal Association of the Order of Malta, a Catholic lay organization dedicated to service and charitable work, provided a $25,000 grant to purchase glass-door display case refrigerators and freezers.

The coordinator of the local branch of the group Clair Raubenstine and his wife Jeanne, also a member of the order and long-time supporter of Catholic Social Services, initiated the project and identified the food cupboard as a hands-on local service project for the order’s local members who assist there on monthly basis.

Local members Karen and John Hoy were instrumental in writing the grant and presenting it to the Federal Association’s Board of Directors.

“The Food Cupboard’s program does great work on a small budget, so funds for this equipment will enable it to better serve its clients,” said Hoy.

In addition, the North Penn Community Health Foundation supported the effort with a $10,000 grant to hire a consultant to coordinate the efforts of contractors and volunteers.

Tom McGlynn, a young Catholic parishioner from Visitation B.V.M. in Norristown and small business entrepreneur, served as the project manager for the renovation.

“Tom brings a variety of unique skills that allowed him to take the project where it needed to go,” Peteraf said. “He got lot of local contacts involved, many of whom ended up doing a lot of work pro bono (including himself). It became a labor of love for many people in this local community.”

The pantry closed from May 29 through June 7 to accomplish the renovations, and re-opened on Monday, June 8 as a “Choice Market.”

From moving out existing food inventory to demolition and subsequent rewiring and reconstruction, and finally painting and restocking, the project was a packed eight days of intense work from early morning to late evening.

Peteraf cited a group of over 50 dedicated volunteers who worked diligently and adeptly alongside contractors to complete the major work in just one week.

Some volunteers were relative newcomers but most were members of a “CSS Montco” volunteer corps that numbers about 65 monthly and over 200 in total.

Most come from area Catholic parishes: St. Paul in Norristown, which provides space on its campus to the CSS Family Service Center and food pantry; St. Genevieve in Flourtown; St. Titus in East Norriton; Visitation B.V.M. in Trooper, near Norristown; St. Helena in Blue Bell; Epiphany of Our Lord in Plymouth Meeting and Mother of Divine Providence in King of Prussia.

Some volunteers that Peteraf called out for special recognition include Maureen Connell, John Friede, Denise Janick, Eileen Gajewski and Maria Wilkerson, all of whom “were there literally day and night all week,” she said.

In just the first three months of this year, the food pantry distributed 150,353 pounds of food to 2,327 households, which represent 8,202 individuals served.

The pantry as it was known, and now the “Choice Market,” depends on the volunteers to carry on weekly operations. All volunteers are cross-trained so that people can fulfill a variety of roles, ensuring that all who serve are careful about how services are delivered.

Jim Drea, a St. Paul parishioner, is the longest serving volunteer who specializes in recruiting and coordinating volunteers, as well as cultivating and maintaining good relations with the various grocery stores that donate food to the effort.

Tom Boyle from Mother of Divine Providence Parish does “whatever needs to be done” according to Peteraf, including being ready “at a moment’s notice” to go and pick up food from local grocers who donate their overstock meat and produce.

Many young people have also gotten involved, some through local scout troops or parish youth groups, and others through local colleges like Ursinus College, whose “Bonner Grad Scholars” serve at the pantry as part of their scholarship requirement to engage in local community service.

CSS is fundraising for various projects to support the work of the pantry, and there is a “Go Fund Me” page set up for those who would like to donate. Those with questions about benefiting from the food pantry, or to volunteer for it, may contact Peteraf at CSS Montgomery County at 610-279-7372.