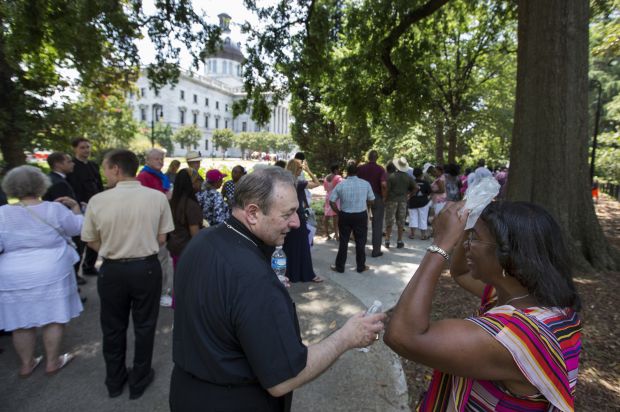 Bishop Robert E. Guglielmone of Charleston, S.C., talks to Barbara Thompson of Manning, S.C., while she waits in the heat outside the South Carolina Statehouse in Columbia June 24. Inside the Capitol the body of the Rev. Clementa C. Pinckney, a pastor and state senator, lay in state. The pastor of Emanuel African Methodist Episcopal Church in Charleston was one of nine people shot and killed at the church June 17. (CNS photo/Mic Smith, The Catholic Miscellany)

COLUMBIA, S.C. (CNS) — The crowd that poured onto the Capitol grounds June 24 to mourn a slain state senator and pastor, the Rev. Clementa Pinckney, was a tribute not just to him, but to each of the victims shot a week earlier at Emanuel African Methodist Episcopal Church in Charleston.

Thousands of mourners stood together for hours on a brutally hot day, waiting patiently for the chance to pay their respects. Strangers struck up conversations, sharing fans and umbrellas against the sun; showing through their actions once again that even though an act of hate had brought them there, it had no place in their midst.

“We wanted to show our respect not only to Rev. Pinckney, but to all those affected. And to show hate doesn’t win; love wins,” said Sandra Johnson, from Columbia.

Bishop Robert E. Guglielmone of Charleston and several men and women religious were among the massive crowd who came to demonstrate their support to the families and the community. They included Fathers Richard Wilson, Bernard Kyara, Gary Linsky, Renard West and Andrew Trapp; Will Frei, seminarian; and Sister Nancy Hendershot, who is member of the Congregation of Sisters of St. Agnes.

When Barbara Thompson, from Summerton, grew faint and dizzy from the heat, the priests standing near her reacted quickly to help. Father Wilson found a police officer who placed a pack of ice on her neck while the bishop gave Thompson water and led her to a bench to rest.

Thompson said she has poor health and it probably wasn’t the best idea to stand for hours in the heat, but she wasn’t about to leave.

“I’ll make it with prayer,” she said, adding that the experience was well worth it. “If everybody in the world was as nice as the people I’ve come across since I’ve been here, it would be a better world,” she told The Catholic Miscellany, newspaper of the Diocese of Charleston. 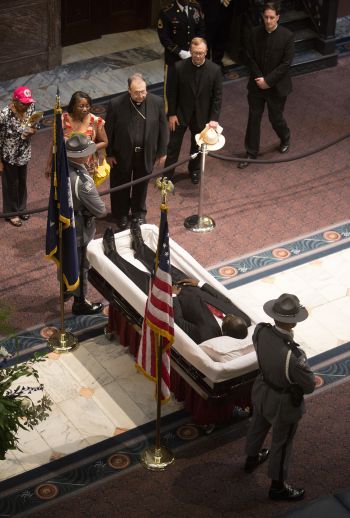 Bishop Robert E. Guglielmone of Charleston S.C., offers a prayer while paying his respects to the Rev. Clementa C. Pinckney, a pastor and state senator, inside the South Carolina Statehouse in Columbia June 24. (CNS photo/Mic Smith, The Catholic Miscellany)

Horace Gillins from West Columbia and Margaret Grayson from Greenville came to support the campaign that all lives matter, and pointed out the historical significance of the day, noting that Rev. Pinckney, who was 41, is the first African-American to lie in state since Reconstruction. The last person to lie in the rotunda was former Gov. Carroll Campbell in 2005.

Rev. Pinckney’s widow, Jennifer, and his daughters, Eliana and Malana, followed the casket into the Statehouse. Senators and House members took turns standing by the casket, each wearing a blue-and-white ribbon with the state crescent — a symbol of unity made by State Sen. Katrina Shealy. They greeted the public with handshakes and hugs, often struggling against tears themselves.

In the background, a black drape covered the large second-floor window and blocked the view of the Confederate battle flag, dangling listlessly from a pole on the Statehouse grounds.

Photos of Dylann Roof, the accused killer, often feature him holding a gun and the Confederate flag, making it a flashpoint in the tragedy. (Roof, apprehended June 18, faces nine counts of murder in state court, where he could be sentenced to death.)

Although many wish to let the family mourn in peace, without the divisiveness that swirls around the flag, conversation inevitably turns to it. As Bishop Guglielmone stood in line, he noted that the battle flag is one of many issues that must be addressed in the healing process.

For many in the crowd, the shootings brought back memories of civil rights battles and how people joined together in unity against evil, then and now.

Patricia Cokley, 65, said she brought her grandson, Damion Cokley, 12, and his friend, Kevin Gleaton, 15, to pay their respects and teach them perspective on what it means to stand up in the community.

“I want to look back and say I made a difference in this time,” said Gleaton.

President Barack Obama was scheduled to deliver the eulogy and memorialize the other eight victims at the June 26 funeral for Rev. Pinckney at the TD Arena.

The other members of Emanuel who died in the June 17 shooting were Cynthia Hurd, 54; Susie Jackson, 87; Ethel Lance, 70; the Rev. DePayne Middleton-Doctor, 49; Tywanza Sanders, 26; the Rev. Daniel Simmons, 74 (he died later at the Medical University of South Carolina); the Rev. Sharonda Singleton, 45; and Myra Thompson, 59.

Funerals for those church members were scheduled for June 26 through June 29.

In Charleston June 19, participants in a prayer circle at Neighborhood House held hands under a blazing sun Friday and called for God to bring us peace, help us heal and love one another.

“Everyone needs to be a messenger of love to all people, with no age or race barriers,” said Pastor Kay Colleton with the Manna Life Center. She was speaking specifically to the shooting of nine people at Emanuel Church, although the prayer outreach had been planned for many months and covered a broad scope.

The prayers at the community outreach were part of a huge outpouring offered up all over the city, the state, and the nation for those who lost their lives in a senseless massacre after a young man entered Mother Emanuel, as the church in downtown Charleston is known, and, after sitting with the prayer group for over an hour, suddenly pulled a gun and opened fire.

Across town, Blessed Sacrament Church celebrated a special Mass to pay respect to those who died and call for peace and unity.

Father Joseph Romanoski spoke in the homily about a time that he himself felt anger and hatred toward someone who wronged him. He said it is normal, but urged people to turn away from that path and do the right thing. Everyone, the priest said, must stay connected to the source of love and life and turn away from hatred.

Wise Taylor is a reporter at The Catholic Miscellany, newspaper of the Diocese of Charleston.