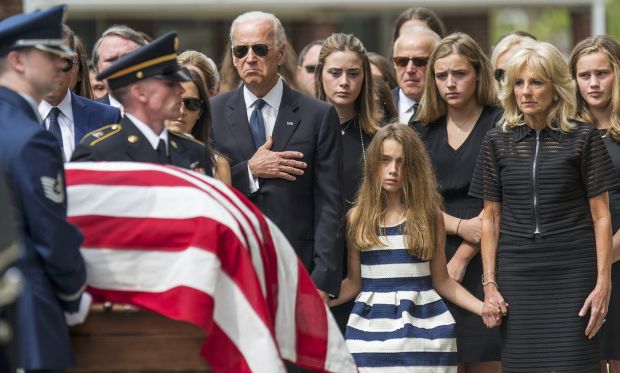 U.S. Vice President Joe Biden puts his hand on his heart June 6 as he and other family members watch soldiers carry the casket with the body of Beau Biden into St. Anthony of Padua Church in Wilmington, Del. (CNS photo/Bryan Woolston, Reuters)

In his homily, Father O’Donovan spoke to the family and friends of the Biden family in the packed church of more than 1,000 people, as well as to the national audience watching the final rites for Vice President Joe Biden’s oldest son.

“As surely as Beau Biden knelt at night to pray with his wife and children,” Father O’Donovan said, he knew he “was given life and a world to fulfill it in by a loving Lord.”

After the gift of what Father O’Donovan called Beau Biden’s “dazzling” life, his death “calls us to hear the promise” of Jesus: “I am the resurrection and the life; whoever believes in me, though the person dies, yet shall that person live.”

In heartbreaking eulogies before the end of Mass, Beau Biden was recalled by his sister, Ashley, and his brother, Hunter.

He called Beau Biden a consummate public servant who “did in 46 years what most of us couldn’t do in 146. He left nothing in the tank. He was a man who led a life where the means were as important as the ends. And the example he set made you want to be a better dad, or a better son, or a better brother or sister, better at your job, the better soldier. He made you want to be a better person.

“Isn’t that finally the measure of a man,” Obama asked, “the way he lives, how he treats others, no matter what life may throw at him?”

The funeral came after two days of public mourning in the state. 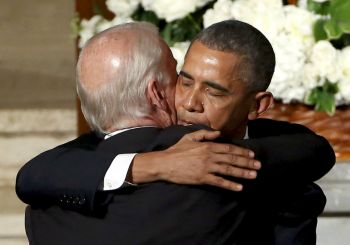 On June 4, mourners filed past Beau Biden’s casket in Legislative Hall in Dover. On June 5, thousands in Wilmington stood in line at St. Anthony for hours to pay their respects to Biden’s widow, Hallie, and the members of the Biden family, who received people in church for 10 hours.

Beau Biden died May 30 at Walter Reed National Military Medical Center in Bethesda, Maryland, of brain cancer. He was 46.

In a statement posted on the Bidens’ website, the family said: “It is with broken hearts that (we) announce the passing of our husband, brother and son, Beau, after he battled brain cancer with the same integrity, courage and strength he demonstrated every day of his life.”

“I pray that Our Lord will give (the Bidens) strength during this time of sadness and that they find consolation and hope in the knowledge that Beau is in the presence of a merciful God,” Bishop Malooly said in a June 1 statement. “Beau Biden was an outstanding husband and father and a hard-working public servant who left his mark on Delaware and our nation. … He was truly a real gentleman in every way possible. May the Lord now provide him eternal life.” 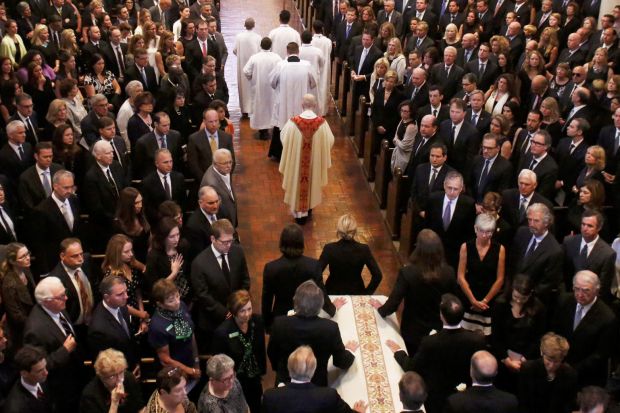 The casket with the body of Beau Biden, son of U.S. Vice President Joe Biden, is carried into St. Anthony of Padua Church in Wilmington, Del., for his June 6 funeral Mass. (CNS photo/Yuri Gripas, pool via Reuters)

Biden was a parishioner of St. Joseph on the Brandywine Church in Greenville.

Joseph Robinette “Beau” Biden III was born Feb. 3, 1969, in Wilmington to Joe Biden and Neilia Hunter Biden. In 1972, his mother and infant sister, Naomi, were killed in a car accident, and he and his brother, Hunter, were seriously injured.

While he was a U.S. senator, Joe Biden would commute from Wilmington to Washington and back by train each day so he could serve in Congress and be home as much as he could to spend time with his children. Joe Biden married Jill, an educator, in 1977.

A graduate of Archmere Academy in Claymont, the University of Pennsylvania and Syracuse University College of Law, he worked at the U.S. Justice Department in Philadelphia from 1995 to 2004. He was a federal prosecutor in the U.S. Attorney’s Office when in 2004 he became a partner in a Wilmington law firm. He worked there for two years before being elected Delaware attorney general.

Biden had joined the military in 2003 as a member of the Delaware Army National Guard and was a major in the Army’s Judge Advocate General Corps. His unit was activated to deploy to Iraq in October 2008, and he spent a year on active duty there. He was awarded the Bronze Star.

The family said that more than his professional accomplishments, “Beau measured himself as a husband, father, son and brother. His absolute honor made him a role model for our family. … Beau Biden was, quite simply, the finest man any of us have ever known.”

Ryan is editor of The Dialog, newspaper of the Diocese of Wilmington. Contributing to this story was Catholic News Service in Washington.

Editor’s Note: On behalf of the Biden family, Hallie Biden has requested that those wishing to make a contribution in memory of Beau do so to the Beau Biden Foundation for the Protection of Children at: www.beaubidenfoundation.org.

PREVIOUS: AP: Number of abortions in U.S. has gone down since 2010