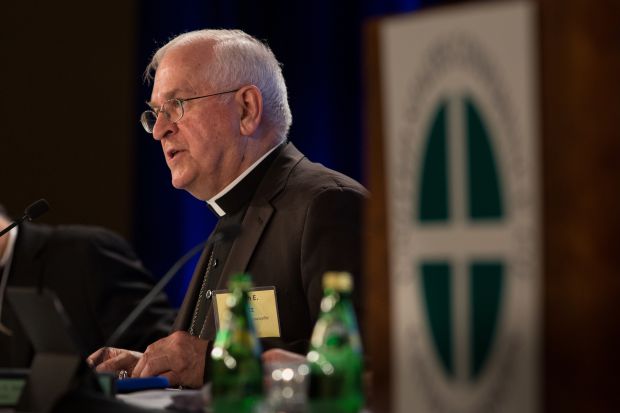 ST. LOUIS (CNS) — The U.S. bishops join with other religious leaders and civic leaders “in pledging to work for healing and reconciliation” after a series of racial conflicts “that have taken place around our beloved country,” said Archbishop Joseph E. Kurtz of Louisville, Kentucky.

The archbishop, who is the president of the U.S. Conference of Catholic Bishops, made the comments June 10 as he opened the bishops’ spring general assembly in St. Louis with a statement on race relations.

In the statement, approved by the bishops, he highlighted that the spring meeting was taking place so close to Ferguson and that the bishops’ November general assembly will be in Baltimore — two places roiled in past months by protests, violence in the streets and looting following the deaths of two young African-Americans after confrontations with white police officers.

He suggested concrete ways the Catholic community can work to end racism and promote justice for all people, including making “a sincere effort” to encounter people of different racial backgrounds and being “truly welcoming” in parishes and neighborhoods of families of different racial and religious backgrounds. People also should get to know their community’s law enforcement officers, he said.

He noted that in the Archdiocese of St. Louis in 1947, Cardinal Joseph Ritter integrated Catholic schools, well before a unanimous Supreme Court ruled in Brown v. Board of Education in 1954 that state segregation of black schoolchildren was unconstitutional.

Cardinal Ritter’s action “shows the Catholic Church can be at the forefront of promoting justice in racial tensions. It is time for us to do it again,” Archbishop Kurtz said.

“We mourn those tragic events in which African-Americans and others have lost their lives in altercations with law enforcement officials,” Archbishop Kurtz said. “These deaths have led to peaceful demonstrations, as well as violent conflicts in the streets of our cities. In every instance, our prayer for every community is that of our Lord in St. John’s Gospel, ‘That they all may be one.'”

Last August, the fatal shooting of 18-year-old Michael Brown, who was black, by Ferguson Police Officer Darren Wilson, who is white, gave rise to weeks of protests, violence in the streets, and looting and vandalism of Ferguson businesses. A grand jury decided not indict Wilson.

More recently, West Baltimore was rocked by hours of rioting and looting the night of April 27-28 in response to the case of Freddie Gray. He died April 19, a week after he was seriously injured while in police custody. A grand jury indicted six police officers on a variety of charges; one officer was charged with several counts, including second-degree depraved-heart murder.

“Sadly, there is all too often an alienation of communities from those sworn to protect them,” Archbishop Kurtz said in his statement. “I respect the sacrifices made by police officers throughout the nation, who in their daily work are placed in harm’s way.

“Let us pray that they suffer no harm as they carry out their duties, and that they always be guided in good and right action as they serve.”

Across the country, he continued, “a violent, sorrowful history of racial injustice, accompanied by a lack of educational, employment and housing opportunities, has destroyed communities and broken down families, especially those who live in distressed urban communities.

“Confronted by these realities, the familiar words of Blessed Pope Paul VI still resonate and continue to call us to action in our day: ‘If you want peace, work for justice.'”

Archbishop Kurtz highlighted the presence the Catholic Church historically has had in such communities in the areas of education, health care and charities.

“Positive efforts are being made in collaboration with ecumenical and interfaith groups in communities where confrontations between individual citizens and law enforcement have taken place,” he said. “Pope Francis calls each of us to work for a culture of encounter and has encouraged all people of good faith to reach out to those in their community and be truly welcoming of all.

“Let the rich cultural diversity of our local communities be woven together in charity, hospitality and service to one another, to join us together as sisters and brothers,” he said.

He recalled the U.S. bishops’ 1979 pastoral letter on racism, titled “Brothers and Sisters to Us,” which “named racial prejudice as a grave sin that denies the truth and meaning of the Incarnation of the word of God in Jesus Christ.

“Unfortunately, the words of that letter still ring true: ‘Racism is an evil which endures in our society and in our church,'” Archbishop Kurtz said.

In the document, the bishops “called for decisive action to eradicate racism from society and considerable progress has been made since 1979. However, more must be done.”

He added, “Let us again call upon our Catholic people to pray frequently in their homes and in their churches for the cause of peace and racial reconciliation.”

He offered five concrete ways for Catholics to commit to ending racism and promoting “peace justice and respect for all”:

— “Pray for peace and healing among all people.”

— “Study the word of God and the social teaching of the church in order to gain a deeper appreciation of the dignity of all persons.”

— “Make a sincere effort to encounter more fully people of different racial backgrounds with whom we live, work and minister.”

— “Pursue ways in which Catholic parishes and neighborhoods can be truly welcoming of families of different racial and religious backgrounds.”

— “Get to know our local law enforcement officers. Let them know of our support and gratitude. And encourage young people to respect all legitimate authority.”

Archbishop Kurtz noted that racial tension in the U.S. is not new.

“It is the most recent manifestation of a relationship as old as the history of our nation, one marred by the tragedy of human slavery. Promoting peace and reconciliation is the only way forward,” he said.

“And we must constantly strive to achieve these goals, trusting in the Lord to lead and guide us, accompanied by his merciful love. May he help all of us to recognize the dignity inherent in every human being, for God said, ‘Let us make human beings in our image, after our likeness.'”

NEXT: Bishops urged to show ‘continued vigilance’ in efforts to stop abuse