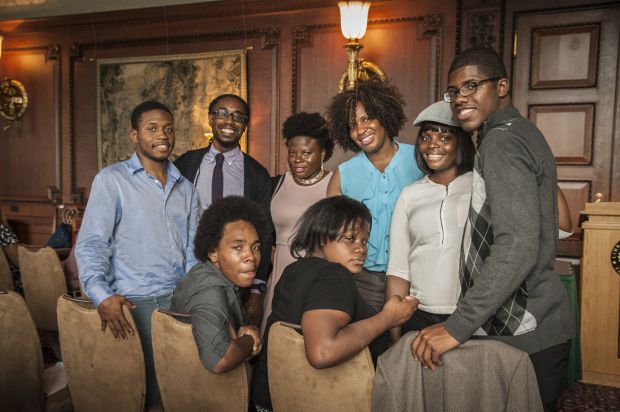 Formerly homeless youths who live in Covenant House facilities around the U.S. pose for a photo at the Library of Congress in Washington June 16. (CNS photo/courtesy Covenant House)

WASHINGTON (CNS) — The inner cities of America are full of youth that call the streets home.

According to the National Alliance to End Homelessness, 5 percent to 7 percent of American youth become homeless in any given year. These kids face sexual and emotional abuse, human trafficking, hunger and mental illnesses.

One agency that helps them is Covenant House, a shelter system for homeless and trafficked youth that provides them with education, job training, health assistance, pastoral and crisis care.

Last year the agency, which was founded under Catholic auspices in 1972 and today operates in 27 cities in six countries, served over 56,000 youth last year alone under the guidance of the current president and CEO, Kevin Ryan.

“The fact that we reach 56,000 homeless and trafficked young people every year and give those kids the opportunity to leave the streets and break the gangs, the guns, the bullets, the bullies, the perps, the predators, and find a bridge to opportunity and find real promise in their lives is a real legacy,” said Ryan.

Cheryl Anne Davis, a young woman who has been assisted by Covenant House, spoke to Catholic News Service about what confronts homeless youth on a daily basis.

She spoke to CNS during a June 16 event at the Library of Congress in Washington that brought together about 40 formerly homeless youth helped by Covenant House programs in the nation’s capital as well as in New York, Philadelphia, Atlanta, and Atlantic City and Newark, New Jersey. Some in the group currently live at a Covenant House residence and others now have housing of their own.

“You have thoughts of not wanting to be around people because it is embarrassing (to be homeless). There are times when you cannot take a shower or a bath, or you do not have toiletries,” Davis continued. “You do not have the necessities you need to get by. I know that when I was homeless it was hard for me to be able to finish school.

“You have to take into consideration that your education is being jeopardized, as well as your housing, as well as your overall sanity. It’s a lot of things that you go through,” she said, “and so I guess you just need to have faith and have a strong belief that you will surpass your obstacles.”

Davis was homeless for almost three years, and because of Covenant House, she has now met her goals of obtaining affordable housing and getting a driver’s license. She is now pursuing a bachelor’s degree in English.

Another formerly homeless youth, Christopher Hall, said he “had experiences as far as sleeping on buses, trains and even staked out at some vacant homes sometimes. It’s been a journey.” The hardest part for Hall was when his family abandoned him.

“I felt like I was lost and that life was over,” he told CNS. He was homeless for two years.

He found Covenant House through a friend, and they helped him confidence-wise, allowing allowed him to see his own potential.

Dajanee, a formerly homeless young woman, who identified herself with one name, expressed similar sentiments about the struggles of finding places to eat, sleep and shower, as well as the inability to take care of her daughter. Covenant House assisted her in obtaining her GED, and they offered her an internship which eventually turned into a part time job. She is currently working for Covenant House as an accounting clerk.

“My goals are to become a sign-language interpreter. I want to open my own business as far as a sign-language school for kids. I also want to run my own day care, and my own hair salon. I have big goals,” she said.

Tom Manning, a fundraising and public relations employee of Covenant House New York, feels there are too many success stories to choose just one to talk about.

“We have so many because we have been doing the work for 43 years, so kids who came into Covenant House when I was first working are now board members! There are success stories all across the country. Our kids are doctors, teachers, social workers etc.,” he said.

Ryan said he is inspired by all that the Covenant kids have accomplished.

“The least interesting thing about the kids at Covenant House is that they are homeless. They are artists, athletes, musicians, mathematicians, readers, writers and interns. They inspire me,” he said. “These young people are crossing a bridge from homelessness to hope, and I get to sit ringside to some of the most miraculous transformations of the human spirit, and I deeply love this work.”

The relationships formed and the assistance given at Covenant House are based upon mutual trust, because if the kids do not trust the employees at Covenant House they will not make it through the program. Those programs also don’t exist without generous contributions, and fundraising is an ongoing challenge, according to Ryan.

“Some have been mistreated by the very people who are supposed to love them the most, so sometimes it takes a little bit of time for the trust to be built up before they stay,” Manning said about Covenant House youth.

“We have outreach teams that go around and a lot of what they do is they’ll see kids on the street, and most kids won’t hop in the van and say, ‘I’m coming!’ on the first night, but they’ll take a sandwich or a coat in the winter, and so when they see that we are out there every night the trust starts to build,” he said. “That’s when we can begin to transform their lives, when they come in and start to believe in themselves.”

NEXT: People express heartache, outrage as they mourn shooting victims