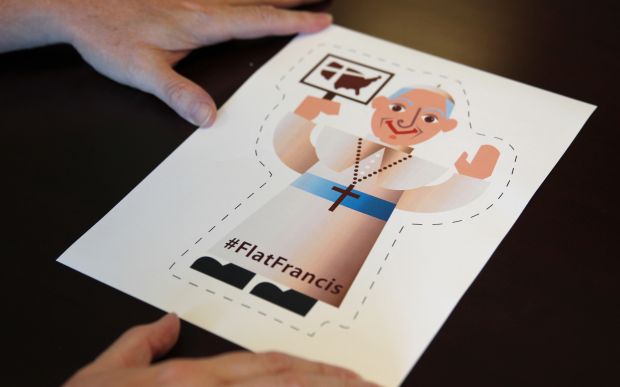 WASHINGTON (CNS) — Pope Francis isn’t going to be visiting the United States until September, but that hasn’t kept the pope from going all around the nation, if only as a simple piece of paper for the time being.

Chicago-based Catholic Extension is helping to build excitement and support for Pope Francis’ upcoming trip to the United States by creating Flat Francis.

The project takes some inspiration from “The Flat Stanley Project,” which centers on a paper cutout of Flat Stanley, a cartoon drawing based on books of the same name, being photographed with people in numerous locations.

This paper pope has steadily been making the rounds and creating smiles for many weeks now. All Catholic Extension asks is that people post their photos online using Twitter and Instagram, or even just email photos directly to the organization: socialmedia@catholicextension.org.

“We want to see selfies, families, youth groups, campus ministries, church ministries, choirs, service projects,” Catholic Extension said in a posting about Flat Francis on its website. “Just share your experience of the Catholic Church! We will post the photos on our website and social media channels and we will also send a collage of all the photos to Pope Francis.”

“Be creative and share #FlatFrancis with your church and on your own social networks. Let’s show Pope Francis how excited we are for his arrival in America!”

Since its founding in 1905, Catholic Extension has been supporting the work and ministries of U.S. mission dioceses, including outreach to Catholic teens and young adults.

Its Flat Francis outreach seems to have caught on. A search of Twitter shows a wide array of people, particularly younger people, expressing their Catholic spirit and excitement about the papal trip.

Those who have taken to Flat Francis’ charm range from priests to families to Catholic schoolchildren. Even well-known comedian Jim Gaffigan and his family joined in on the fun in a photo posted to his wife Jeannie’s Twitter account.