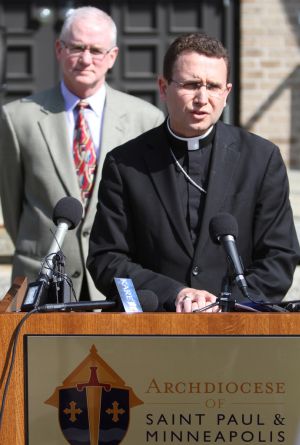 Auxiliary Bishop Andrew H. Cozzens of St. Paul and Minneapolis speaks during a June 5 news conference outside of the chancery after the Ramsey County Attorney’s Office criminally charged the archdiocese for failing to protect children. Behind him is Judge Tim O’Malley, archdiocesan director of ministerial standards and safe environment. (CNS photo Dave Hrbacek, The Catholic Spirit)

ST. PAUL, Minn. (CNS) — Catholic officials affirmed the commitment of the Archdiocese of St. Paul and Minneapolis to protecting children and pledged to continue to work with an ongoing investigation after the Ramsey County Attorney’s Office criminally charged the archdiocese for failing to protect children.

The charges allege the archdiocese contributed to the harm of three minors sexually abused by former priest Curtis Wehmeyer.

“We all share the goal of protecting children,” said Judge Tim O’Malley, the archdiocese’s director of ministerial standards and safe environment, who spoke to the press alongside Auxiliary Bishop Andrew H. Cozzens outside of the archdiocese’s chancery.

“To that end, the archdiocese will continue to work with the St. Paul Police Department and the Ramsey County Attorney’s Office, as well as our private and public sector partners, to accomplish that goal,” O’Malley said.

“With regard to these three young victims, it is not only Curtis Wehmeyer who is criminally responsible for the harm caused, but it is the archdiocese as well,” said Ramsey County Attorney John Choi at a news conference announcing the charges.

Former pastor of Blessed Sacrament Parish in St. Paul, Wehmeyer pleaded guilty in Ramsey County in November 2012 to sexually abusing two minors and possessing child pornography, and was convicted in February 2013. In November 2014, Wehmeyer was charged in Chippewa County, Wisconsin, with sexual assault of a third minor victim in 2011. He remains incarcerated.

The archdiocese reported allegations of child sexual abuse against Wehmeyer to the St. Paul Police Department and removed him from ministry in June 2012. He was dismissed from the priesthood this year.

Each count carries a maximum sentence of a $3,000 fine or one year in prison, or both. Because the archdiocese is not a person, only the fine would apply if it were convicted, Choi acknowledged.

The criminal charges and civil petition are “about the accountability,” Choi said. “Much can be gained, especially in a situation like this, when there’s an admission that the corporation did wrong. I think that will go a long way with respect to what victims need, what our community needs. Through this process we hope to achieve that.”

The charges have come from a 20-month, two-phase investigation conducted by the St. Paul Police Department and Ramsey County Attorney’s Office. The offices’ investigators have interviewed more than 50 witnesses and obtained approximately 170,000 pages of documentation.

The investigation is ongoing, Choi said, adding that his office does not have enough evidence to charge an individual at this time. Choi and St. Paul Police Chief Thomas Smith urged people with pertinent information to come forward.

“The facts that we have gathered cannot be ignored, they cannot be dismissed and are frankly appalling, especially when viewed in their totality,” Choi said. “More importantly, our community cannot allow them to be repeated.”

The archdiocese has been “generally cooperative” during the investigation, Choi said. “They have been responsive to all of our requests. We’ve also had the opportunity to validate and verify that what they’ve given us is truthful, since we have evidence from so many sources.”

At the archdiocese’s news conference, O’Malley repeated one of Choi’s promises, that “facts must lead the way.”

“Truth is always in the details,” said O’Malley, who was named to his post last August. “We join Chief Smith in thanking those who have courageously come forward and to help to find that truth and, in turn, protect children. We also join the county attorney and chief in encouraging anyone with information to contact the St. Paul Police Department. The more complete the information, the more likely justice will be served.”

O’Malley, who is the former superintendent of Minnesota’s Bureau of Criminal Apprehension and a former FBI agent, declined to comment further, citing the ongoing investigation.

In a message to employees of the archdiocese, Father Charles Lachowitzer, vicar general and moderator of the curia, said the archdiocese was reviewing the charges and will continue to cooperate with the investigation.

“Please join in praying for victims/survivors of sexual abuse by clergy, as well as for healing in our local church,” he said.

Bishop Cozzens echoed that concern for victims. “We deeply regret the abuse that was suffered by the victims of Curtis Wehmeyer,” he said, “and are grieved for all victims of sexual abuse.”