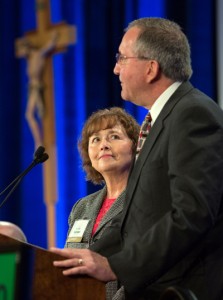 ST. LOUIS (CNS) — It was not surprising that marriage and the family were among the issues the U.S. bishops considered as they planned their strategic priorities for the next few years.

Earlier during the spring general assembly June 10-12 in St. Louis, they heard from Archbishop Salvatore J. Cordileone of San Francisco, who said that the U.S. Supreme Court’s impending decision on the nationwide legalization of same-sex marriage won’t change what the Catholic Church holds as the true definition of marriage.

On the second day of their meeting, the bishops heard from three couples who shared their personal stories and suggestions for promoting healthy marriages and celebrating the beauty of the church’s teaching on marriage.

Jeffrey and Alice Heinzen from the Diocese of La Crosse, Wisconsin, told bishops they must use positive, affirming messages in promoting marriage. The Heinzens, married 35 years and who were invited to speak at the October 2014 Synod of Bishops on the family, encouraged them to speak frankly about the sacrifices within marriage, but also assure married couples that “taking a risk of going against the culture will bring us joy,” Jeffrey Heinzen said.

The Heinzens suggested boosting marriage preparation programs, offering more aftercare resources for married couples, and encountering couples during baptismal preparation to help them sustain a healthy marriage, and other practical ideas, such as celebrating wedding anniversaries at parishes.

Ricardo and Lucia Luzondo, married 15 years, spoke about how the church can better accompany married couples on their life journey, based on their experiences ministering to Hispanic Catholics in the Archdiocese of San Antonio.

Nearly half of the Catholic population in the United States is Hispanic, and the Center for Applied Research in the Apostolate at Georgetown University in Washington estimates that in less than a decade, Hispanics will become the majority group in the church.

Oftentimes, parishes offer limited or no resources in Spanish related to marriage and the family.

There also is a need for greater training for seminarians and ongoing formation for priests in how to meet the pastoral needs of couples, said Ricardo Luzondo.

Priests sometimes do not feel competent or comfortable helping couples, may limit or avoid helping them altogether, or worse, give them advice that isn’t in line with church teaching. “This leaves couples disappointed with the church and discouraged from active participation,” he said.

Other practical resources the couple cited included MarriageCare, a parish-based ministry of married couples trained to work with couples experiencing conflict; and Mary’s Mantle, a prayer ministry for brides and their grooms.

John and Claire Grabowski of Maryland, who focused on the church’s teaching on marriage, acknowledged that every marriage experiences suffering.

“We know that we couldn’t do this on our own,” said Claire Grabowski, who has been married to her husband for 30 years. “The fact that marriage is indissoluble frees us from having to keep deciding to be married. If divorce is not an option, and staying married seems impossible, then we have to turn to and draw on God’s grace.”