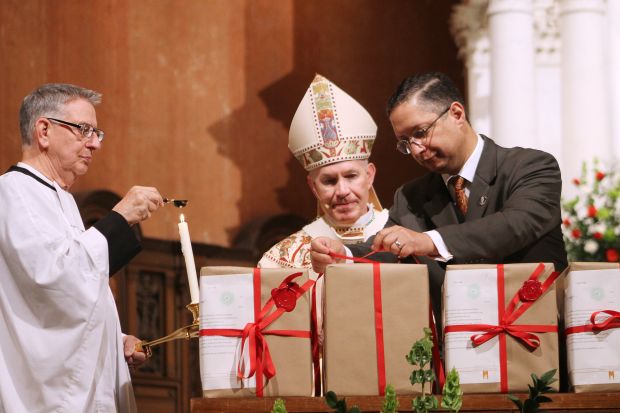 Archbishop George J. Lucas of Omaha, Neb., watches Omar Gutierrez June 18 as he ties a ribbon on one of the boxes of documents detailing the archdiocese's investigation for the sainthood cause of Irish-born Father Edward Flanagan, who founded Boys Town in Nebraska. A special Mass marked the the end of the archdiocesan phase for the cause, which now advances to Rome. (CNS photo/Susan Szalewski, Catholic Voice)

OMAHA, Neb. (CNS) — About 800 people witnessed history June 18 as the Archdiocese of Omaha advanced to Rome the sainthood cause for Father Edward Flanagan, Boys Town founder.

Archbishop George J. Lucas was the main celebrant of a morning Mass at St. Cecilia Cathedral in Omaha that marked the closing of the archdiocesan phase of the canonization effort with a special ceremony to encase and officially seal four boxes — 4,600 pages — of documents detailing the archdiocese’s three-year investigation. 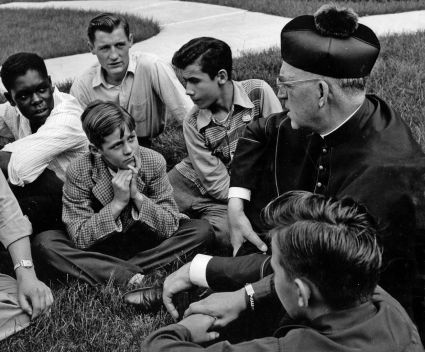 The documents will be shipped to the Congregation for Saints’ Causes at the Vatican. If the findings are accepted, recognizing Father Flanagan’s heroic virtues, he will be declared “venerable.”

Among those concelebrating the Mass were Bishop Kevin Doran of Elphin, Ireland, Father Flanagan’s native diocese, and Father Patrick O’Toole, pastor of the parish in which Father Flanagan grew up in Ballymoe, Ireland.

Numerous people have worked on the sainthood cause “diligently and respectfully over several years,” Archbishop Lucas said in his homily.

“The results of all this good work is wrapped up in these boxes,” he said. While unable to elaborate on the investigation’s findings, he gave a hint and garnered a laugh from the congregation, saying, “We wouldn’t go to all of this trouble if it wasn’t very good.”

The cause for sainthood is about more than promoting Boys Town or its founder, Archbishop Lucas said. “We’re trying to discover what God has accomplished in this holy priest, who allowed God to use him as his instrument.”

Like Pope Francis, Father Flanagan has “put a face on the precepts of the Gospel,” a witness that extended from Omaha out into the world, for believers and nonbelievers, the archbishop said.

Father Flanagan cared for the physical and spiritual well-being of children, Archbishop Lucas said. And that ministry continues today at Boys Town, evolving to meet the changing needs of youths, he said.

Boys Town residents filled two pews toward the front of the cathedral. Archbishop Lucas had them stand for special recognition after Communion. “I’m afraid Father Flanagan would have put the brakes on this whole thing if I hadn’t recognized” the students, he said.

Members of Father Flanagan’s family also attended, including three great-nephews: brothers Mike, Jim and Ed Flanagan, all of whom live in Omaha.

Ed Flanagan, who serves on a board of directors for the Father Flanagan League Society of Devotion, said he felt “honored and blessed” by the large turnout.

“It’s absolutely an honor,” he told the Catholic Voice, the archdiocesan newspaper. “It’s a great celebration.”

Szalewski is a staff writer at the Catholic Voice, newspaper of the Archdiocese of Omaha.

NEXT: Archbishop Lori opens Fortnight for Freedom with Gospel connection