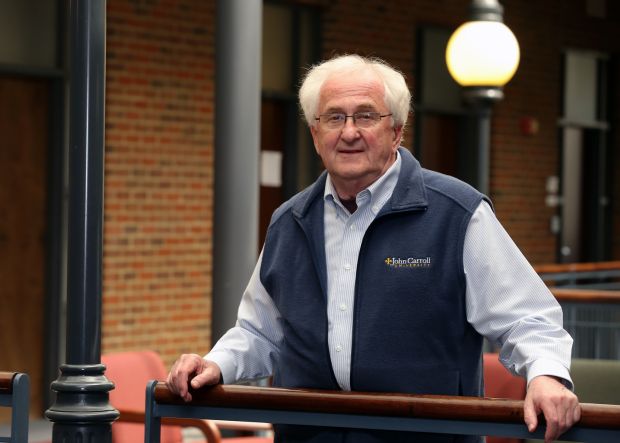 Author and lecturer Father Donald Cozzens is shown on the campus of John Carroll University in suburban Cleveland May 12. (CNS photo/William Rieter)

UNIVERSITY HEIGHTS, Ohio (CNS) — How does Father Donald Cozzens, a well-known author and lecturer whose candid insights into the priesthood have challenged the Catholic Church to confront clericalism and renew its structure, follow up 18 years of exploring priestly life in written word?

He writes a novel of intrigue about the very same issues.

Father Cozzens, 76, a priest of the Cleveland Diocese for 50 years, has woven a captivating tale that incorporates the themes he has observed and reflected on over the years in “Master of Ceremonies,” published by In Extenso Press earlier this year.

It was his book “The Changing Face of the Priesthood,” published in 2000, that set the course for much of Father Cozzens’ life, allowing him to tackle the issues he believes church officials must address including transparency in decision-making and welcoming women into a wider role in church life.

He told Catholic News Service his writing is intended to help people better understand the challenges facing the church and the priesthood in particular. Before writing the mystery novel, Father Cozzens edited one book and wrote five others on the priesthood.

“I think my truth is priesthood,” he said. “I’m very grateful for the grace. We priests have a front-row seat of the hidden workings of grace because people trust us. And we haven’t always earned their trust. What we’re doing is standing on the shoulders of priests they knew years ago.

“It’s such a privilege to have people trust you with struggles in their lives that they haven’t told their friends about.”

His novel is rooted in what he observed for more than a decade as a church insider — former rector-president of the Cleveland Diocese’s St. Mary’s Seminary, one-time vicar for clergy and religious, and counselor to priests and seminarians. It took shape soon after his book “Freeing Celibacy” was published in 2006. In that work he maintained celibacy is a gift of the Holy Spirit given to relatively few and that it should be treasured and not legislated for priests.

“I had this thought come into my mind: If somebody wanted to get back at a bishop or a priest who abused him and they wanted to come in and tease him, what if they go to his public liturgies and put a laser dot on his chest,” he said about the novel.

From there, he constructed a plot rooted in conspiracy and secrecy while touching on the psychological impact of childhood abuse.

“I just started writing and once I had a list of characters, I just thought it was great fun. I mean, I couldn’t wait to get back to it,” Father Cozzens said.

He chose Baltimore as the setting because he knows a little about the city from earlier visits and began developing key characters.

Among them: a loyal church worker in the chancery who becomes disheartened after her nephew, a 20-year Army vet, reveals he was sexually abused as a teenager by the retiring archbishop whom she saw daily; her friend, a retired CIA agent; the archdiocesan finance director, a monsignor who heads a secretive group of priests with connections deep inside the Vatican and who believes he must protect the church from the Second Vatican Council reforms and at the same time is bitter after being bypassed for appointment as auxiliary bishop; and the auxiliary bishop who has a Vatican II vision of the church.

Providing context for the story are two other characters — both university professors interested in church history.

The novel also provided Father Cozzens a venue to explore human ambition as it relates to the priesthood as well as what he considers the feudal system under which the church has functioned for centuries. He explored the church’s hierarchical structure in “Faith That Dares to Speak,” published in 2004, suggesting that it is comparable to ancient feudal societies.

Father Cozzens acknowledged his views have not always endeared him to fellow clergy.

“I don’t know when this light went on. Twenty years ago or more. … I read history because history is very liberating, and I found reading the history of the church very liberating. So when the light went on, I found it still is a very feudal structure. Probably one of the big problems in the church today is the church’s structure. If you take basically good, healthy people, put them into a structure that no longer works, it can have negative effects,” he said.

As for ambition, Father Cozzens said it is as much a part of human nature as human sexuality. He understands how natural it is for priests to want to advance, offering their gifts for the greater good of the church. But in the church it’s unheard of for a priest to openly seek advancement in the hierarchy, he said.

“Our first ambition should be to be a Christian and to live the Gospel. That should be my ambition,” Father Cozzens said.

Critics of his work have long maintained he has betrayed the priesthood and, worse, the church. He said he has saved some of the critical letters and emails as a reminder of why he continues to push for changes in the church through his writing and speaking and occasionally as a retreat leader.

In writing “Changing Face,” Father Cozzens said he was halfway through when “it dawned on me if I was going to write a really honest book on the priesthood, I’d have to add two chapters, a chapter on clergy abuse and a chapter on (sexual) orientation. That’s when I went to my journal and said, ‘Yeah, this is going to be controversial.'”

He recalled how hurtful it was when some priests refused to talk with him about the issues he raised.

“I was applauded by some people who said, ‘This is an honest look at the priesthood today and why we have problems.’ And that was affirming,” he said.

“At the same time there was strong criticism, especially from brother priests who said, ‘You hurt the church. You betrayed the priesthood.’ And they were saying I was disloyal, and I think most men don’t want to hear they’re disloyal,” he continued.

The criticism ebbed when the abuse scandal unraveled in 2002. “So the people who thought I was exaggerating a minor scandal, they seemed to back off,” Father Cozzens said.

It turned out that as a religious-themed book, “Changing Face” was a best-seller. It has been translated into eight languages and the soft-spoken priest said he has heard from priests and bishops around the world seeking his views on the priesthood.

By the time “Changing Face” was published, Father Cozzens had decided to step down as seminary rector so he could return to teaching and have more time to write. He spent a year as resident scholar at the Institute for Ecumenical and Cultural Research at St. John’s University in Collegeville, Minnesota, before joining John Carroll as visiting professor of religious studies in 2002. By that time his book “Sacred Silence: Denial and Crisis in the Church” was published. In it he argued for widespread changes in church procedures.

“Changing Face” and “Sacred Silence” received first-place awards from the Catholic Press Association. Father Cozzens is to receive the John XXIII Award of the Association of U.S. Catholic Priests during the group’s annual assembly June 29-July 2 in St. Louis. The organization claims more than 1,000 members who describe themselves as Vatican II priests.

“Don has spoken for priests and about priests and about the priesthood in a positive, honest integral way, in a way that uplifts us in a difficult time,” said Father Bob Bonnot, chairman of the association’s leadership team, and pastor of Christ Our Savior Parish in Struthers, Ohio.

Father Cozzens said he is not sure if he will write another novel or focus on other issues related to priesthood in another book. But he said he will continue to speak for changes in the church as opportunities arise.

“It’s the renewing spirit (that guides my writing). And when the Vatican Council said that the church will always be in need of renewal and reform, how can you be offended if somebody calls you a renewalist or reformer? In fact, Pope Francis is a reformer.”