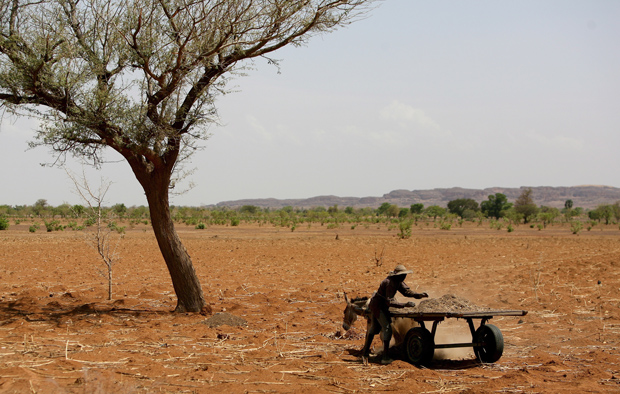 In this 2007 file photo, a Malian farmer tends to his field on a dry plain in Mali, Africa. (CNS photo/Nic Bothma, EPA)

WASHINGTON (CNS) — U.S. Catholic leaders lauded Pope Francis for his encyclical, “Laudato Si’, on Care for Our Common Home,” for calling all to be good stewards, for putting “a human face” on environmental issues and for starting “a new conversation” on the urgent need to protect all of creation.

As soon as the long-awaited document was released at the Vatican June 18, statements of reaction quickly followed.

Dominican Sister Donna Markham, president of Catholic Charities USA, said she hopes the encyclical’s message will “inform, inspire, and influence discussion about how our obligation to care for creation is as essential as our responsibility to care for each other.”

She said the encyclical “promises to shine a light on our moral obligation to care for all of God’s creation, from our neighbors who are marginalized to the earth that nourishes us all.”

Bishop Peter A. Libasci of Manchester, New Hampshire, said the pope’s encyclical “envisions a world growing closer, rather than consumed by war and dissension, and stresses that there is a connection between care for the earth, justice for the poor, commitment to society, and our own interior peace.”

He said the pope was ultimately “asking us to re-evaluate our needs and our wants, and pointing the way to happiness: not a happiness based on the continual accumulation of material goods, but a true satisfaction and happiness in an environment that produces and sustains life.”

“On this issue, the pope has done what he has done since his election: He has illuminated and made new an age-old teaching of the church and in doing so, begun a new conversation in hopes of advancing the common good,” he said.

The archbishop added that “whether one agrees or not with the scientific consensus on the link between human activity and recent climate change, the Holy Father rightly makes the moral case that the need remains for us to act to protect the our environment. We must resist the ‘throwaway culture,’ the pope warns against, and seek ways in our daily lives to practice environmentally friendly behavior.”

Across the country, the bishops of Alaska welcomed it “with joy and thanksgiving.” In a joint statement quoting from it, Anchorage Archbishop Roger L. Schwietz, Juneau Bishop Edward J. Burns and Fairbanks Bishop Chad W. Zielinski said: “At the heart of Laudato Si’ we find this question: ‘What kind of world do we want to leave to those who come after us, to children who are now growing up?'”

They noted that the pope deals with environmental issues within the context of the purpose of life and why human beings exist at all.

Detroit Archbishop Allen H. Vigneron described the encyclical as a “moment of grace for the church and for the world.” He said the pope “offers a clear witness to the Creator’s plan for the human family and our care of our common home, so that this wisdom will serve as the norm for how we should live together and care for those on the peripheries.”

The Sisters of Mercy, based on Silver Spring, Maryland, said the pope “clearly connects concern for people who are poor with care for creation, which is central to us. … We believe this is one of the great moral issues of our time and for us a compelling and urgent call to respond.”

“In our ministries throughout the United States, Latin America, the Caribbean and the Philippines, we see vividly the links between climate change and environmental degradation and the plight of immigrants, women and children, and those victimized by violence and racism,” the statement said. “We worry about even greater suffering given forecasts for increased climate refugees, environmental-related conflicts and food crises if we do not act.”

Seattle Archbishop J. Peter Sartain said Pope Francis “put a human face on the issue of ecology and caring for creation. This teaching document, which is consistent with the teaching of his predecessor, Pope Benedict XVI and other recent popes, is an urgent call to Christians, people of other faith traditions and those of no faith to protect our earthly home and our brothers and sisters who inhabit it.”

“That role,” he said, “is not in judging scientific questions, many of which remain unanswered definitively — including the analysis of the nature and the extent of humanity’s contributions to climate change. Rather, the church’s role, as in many other complex and practical decisions, is in proposing moral parameters within which any effective solution should be judged.”

Joan Rosenhauer, executive vice president of U.S. operations for Catholic Relief Services, said the U.S. bishops’ overseas relief and development agency is “continuously encouraged by Pope Francis’ commitment to the poor, and the relationship between the environment and our well-being.” She said the pope’s message “resonates with CRS as we work to help the most vulnerable around the world adapt to the effects of climate change.”

Colorado’s bishops said they hope “this encyclical will motivate the many interested parties in Colorado and across the globe to dialogue and develop prudent and constructive action to protect the precious gift of creation that we have been given.

“We also hope that it will inspire renewed solidarity in responding to the concerns and needs of those in the margins, especially the poor, vulnerable and young.”

The Conference of Major Superiors of Men and the Leadership Conference of Women Religious, which represent the leaders of U.S. religious congregations, said they welcomed the pope’s call to care for one another by caring for all of God’s creation. These leaders pointed out that women religious and men’s religious orders have had a long history of standing with those most in need which includes those who suffer the consequences of environmental degradation and the destruction of God’s creation.

“The Holy Father reminds us of our biblical call to live in right relationship and to cooperate with God’s design for our world. When we choose lives of simplicity, hope, and love we honor God’s presence in our world; we grow closer to God and we build the community for generations to come,” said Holy Cross Sister Joan Marie Steadman, LCWR executive director.

Capuchin Father John Pavlik, CMSM director, said: “We wholeheartedly support Pope Francis’ encyclical on integral ecology and the urgent implications for addressing climate change. This is a matter of faith in the God of all creation who calls us to love, respect, and walk humbly with all of creation.”

The leadership team of the Congregation of the Sisters of St. Joseph of Peace encouraged all sisters and associates of the congregation to “prayerfully read and reflect” on the encyclical, and recommitment themselves to several principles agreed upon by the congregation at its 2008 chapter, including to “deepen our spirituality of peace regarding care of creation” and “identify and reduce our carbon footprint in our communities, ministries and institutions.”

“Pope Francis’ recurring use of the image of our “common home” weaves together the importance of responding to the environmental crisis in all of its complexities, from the economic inequities that create an ever-widening gulf between the rich and the poor to the underlying spiritual hunger felt by so many today,” said San Francisco Archbishop Salvatore J. Cordileone in his statement.

He added: “If we are going to repair creation and safeguard the dignity of every human being living on ‘our Sister, Mother Earth,’ it will require cooperation, sacrifice and goodwill from everyone.”

Pope Francis “challenges us today to go beyond the political, to go beyond the economic,” said Archbishop John J. Myers of Newark, New Jersey. “He says squarely, clearly, simply, that we have a ‘responsibility to nurture the earth, to nurture creation, to keep it and make it grow according to its laws.'”

Archbishop George J. Lucas of Omaha, Nebraska, encouraged “a thoughtful reading of the encyclical in the days ahead,” urging people “to take personally the pope’s call for conversion of heart.”

“Pope Francis calls individuals, families, communities, corporations and nations to a fresh way of thinking and acting,” he said. “As previous popes have done, he urges us to reject a utilitarian consumerism that does not preserve the environment for future generations and that shows a harsh disregard for the poor today.”

Benedictine Sister Michaela Hedican, prioress of her order, called the document “a timely reminder to all of us who live in richer countries to take moral responsibility for the earth’s environment.”

“Our community welcomes the Pope’s call to recognize the ‘collective selfishness’ which has resulted in such damage to the environment,” she said in a statement released by St. Benedict’s Monastery in St. Joseph, Minnesota.

Print copies of “Laudato Si'” in Origins, the CNS Documentary Service, will be available for shipping June 22. To order individual copies for $8, call 202-541-3290. Bulk discounts apply.

NEXT: Religious and civic leaders: Maybe si, maybe no on Laudato