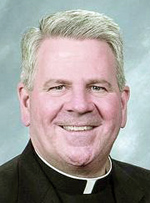 It’s a given there will be a huge number of visitors in Philadelphia this fall for the World Meeting of Families, Sept. 22-25, and the visit by Pope Francis including the Festival of Families on the Benjamin Franklin Parkway on Sept. 26 and the huge Papal Mass on the parkway Sept. 27.

It’s also a given that included in this number there will be priests, deacons and nuns, many of whom are coming a distance. The question is, where will they stay?

As with just about everything connected with the World Meeting of Families, there is a committee for that, and in this case it is chaired by Father Paul Kennedy, pastor of St. Katherine of Siena Parish, Philadelphia.

The Housing Committee is charged with finding accommodations for those visiting priests, deacons and nuns who do not have prearranged housing. It is not responsible for visiting bishops, the papal party or other special guests whose arrangements are being handled through the United States Conference of Catholic Bishops, or lay visitors.

Also, Louise Sullivan, of the archdiocesan Clergy Office, will oversee the credentialing of visiting priests. Rounding out the committee are three representatives of the World Meeting of Families itself: Cathy Peacock, Kathy Baumer and Stefan Johnson.

It is expected up to 1,500 priests may be concelebrating with Pope Francis. Most of them are not making housing arrangements through the committee, especially because many of them are priests of the Archdiocese of Philadelphia.

At the outset Father Kennedy’s committee sent inquiries to all the parishes in the archdiocese asking if they had available accommodations to spare. While 90 parishes indicated they had rectory or convent space, another 20 said they had already arranged for a visiting priest or priests to stay with them, usually acquaintances or friends of the pastor.

Also, members of religious congregations for men and women who have a house in the archdiocese may have made plans to stay with their confreres.

Requests have begun to slow down but more are bound to come in, Father Kennedy believes.

“At this point, we have arranged for about 80 priests,” he said. “I have invited a priest from Kenya to stay at my rectory.”

Especially helpful were the Norbertines at Daylesford Abbey in Paoli who accepted a number of priest visitors and the Immaculate Heart Sisters at IHM Spirituality Center in Immaculata, who invited a number of women religious.

Most of those who have applied for help with accommodations are staying the entire week, and will be attending the World Meeting of Families’ congress and remaining for the visit by Pope Francis, Father Kennedy said.

“From what I see, for most of the clergy the congress is the big draw; the papal event is just icing on the cake,” he said.

Because of the huge crush of visitors and Philadelphia-area residents into center city who are not attending the Congress but will be in town during the last two days for the papal events, Father Kennedy and his committee are seeking to place the visitors along the I-95 corridor and other residences with relatively easy access to center city near public transportation, especially trains.

The hosts are not responsible for transportation, other than perhaps driving their guests to a train station.

The committee matches the applicants with the volunteer hosts and it is up to the visitor to contact the host for final arrangements. While there is no stated policy, Father Kennedy assumes the host parishes or religious houses will not charge the visiting priests, sisters and deacons for their stay. “It is supposed to be hospitality,” he said.

Making all of these arrangements does require work, but “I’m happy to do it,” Father Kennedy said. “I’m happy with the committee, they have worked very hard. Some of the priests, deacons and religious we are helping are from just around the corner, some coming are from out of the country, some half way around the world.”

PREVIOUS: How to welcome the world into your home, one family at a time

NEXT: Vietnamese Catholics ready for strong show of faith in Phila.