Christian hope does not let sting of death poison your life, pope says 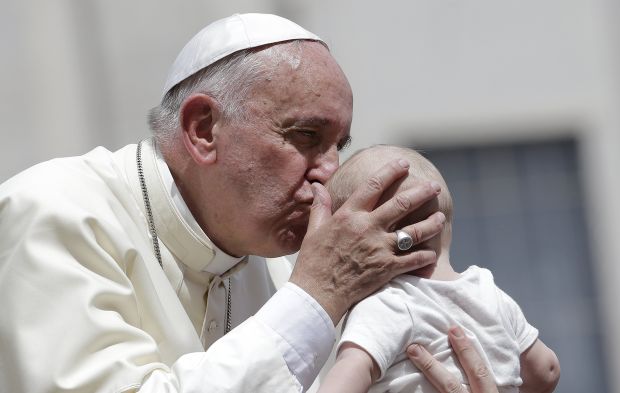 Pope Francis kisses a baby as he leaves his general audience in St. Peter's Square at the Vatican June 17. (CNS photo/Max Rossi, Reuters)

VATICAN CITY (CNS) — Christian hope and faith in the afterlife mean the sting of losing a loved one does not have to leave behind a poisonous venom in our lives, Pope Francis said.

“Our loved ones have not disappeared into dark nothingness: Hope assures us that that they are in God’s good and strong hands. Love is stronger than death,” he said at his general audience June 17.

As part of a series of talks about the family and problems they face, the pope looked at death, particularly the loss of a close family member.

When a loved one dies, especially a child or a parent of young children, “death is never able to appear as something natural,” he said.

It is “heart-rending” when a mother and father lose a child: “It’s as if time has stopped. An abyss opens that swallows up the past and the future,” he said.

Losing a child seems to go against everything life is supposed to be about, he said. “It’s a slap in the face to all the promises, gifts, and sacrifices of love joyously given to the life we have given birth to,” he said.

Just as traumatic is when a child loses one or both parents, he said.

They ask, “Where is daddy? Where is mommy?'” or “‘When will mommy come back home?’ Oh, what do you say? The child suffers” and he or she lacks the experience or understanding “to give a name to what has happened,” the pope said.

These experiences of death are particularly distressing — “like a black hole that opens in the life of a family and for which we don’t know how to give any explanation.”

Sometimes family members will blame God. “I understand. They get mad at God, they curse him,” or begin to question or doubt his existence, the pope said.

“This anger is a bit of what comes from the heart of huge heartache” of losing a family member, he said.

Unfortunately, death has a number of evil “accomplices, who are even worse” and their names are hatred, envy, pride, greed, indifference — basically “the sin of the world that works for death and makes it even more painful and unjust.”

Death’s “auxiliary forces” render so many families helpless and, so often, such horror in some parts of the world starts to seem like an “absurd normality.”

“May the Lord free us from getting used to this” kind of loss of life, he said.

For the people of God, death never has the last word, the pope said. However, it still takes an enormous amount of love to face “the darkness of death.”

He asked that today’s priests and all Christians find ways to better express what the faith means when facing the death of a loved one.

People need to mourn, “you must never deny people the right to cry,” he said.

Christians must become “accomplices” of love, armed with the faith and able to help families navigate the “very difficult path of death as well as the sure path of the Lord, crucified and risen, with his irreversible promise of resurrection.”

The Lord will reunite everyone once again, and it is this Christian hope and faith that will “protect us from a nihilistic view of death as well as false worldly consolation,” myths or superstition, he said.

The pope reminded people that June 20 marked World Refugee Day, and he asked people pray for all those forced to flee as they search for a new home “where they can live without fear.”

He asked that the dignity of refugees always be respected and encouraged the international community to cooperate and work effectively to “prevent the causes of forced migrations.”

“I invite everyone to ask forgiveness for the people and institutions that close the doors to these people who are seeking a family, who want to be cared for,” he said to applause.

PREVIOUS: Concern for poor is sign of the Gospel, not communism

NEXT: Read encyclical on care for creation with ‘open heart,’ pope asks world