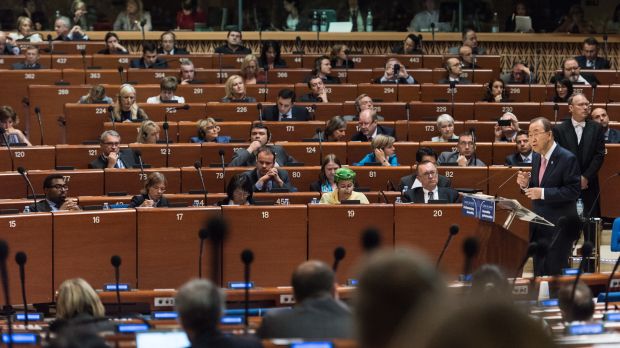 MANCHESTER, England (CNS) — Bishops across the European Union are calling on member states to be generous toward tens of thousands of migrants flooding across the Mediterranean.

French, German and Italian bishops have issued formal statements in response to a crisis that has seen more than 100,000 migrants, many of them refugees from wars in Syria and Eritrea, cross into Italy, Greece and Malta from North Africa and Turkey.

With an estimated 450,000 to 500,000 migrants gathering in Libya, the EU has decided that the crisis constitutes the first ever “emergency situation” that allows provisional measures under the 2007 Lisbon Treaty.

Because the vast majority of migrants are landing in Italy and Greece, the European Commission is seeking, under the treaty, to relocate the migrants to other nations based on factors such as population, gross domestic product and unemployment as well as the number of refugees already taken in.

European ministers met June 16 to discuss mandatory quotas for the resettlement of 40,000 migrants across the EU and to consider how to break up human trafficking gangs.

But proposals have met with opposition from a significant number of member states and through June 23 no agreement has been reached.

The French interior minister has complained that many of the migrants are “illegal” while Spain has objected to accepting migrants when it its unemployment rate stands at 23 percent. The Polish prime minister has voiced opposition to mandatory quotas in principle.

The United Kingdom and Denmark, two of three countries with a right to opt-in to asylum policies, have each refused to accept any of the migrants at all.

Father Patrick Daly, COMECE general secretary, told Catholic News Service that the quotas were an attempt by the commission to resolve the problem at a European level and was therefore an expression of the Catholic principle of solidarity.

“For the Catholic Church, the fundamental principle underlying the migration issue is one of deep and profound compassion for those on the front edge: the migrants themselves who are seeking asylum in our shores, those who have placed their hopes on a better life in Europe, and there is also sensitivity for those countries on the front line, particularly Italy and Greece,” Father Daly said.

“What the church is very much in favor of is an optimum both for the receiving countries and those in need of relocation in the EU,” he added.

The permanent council of the French bishops’ conference issued a declaration June 17 to urge the Catholics of their country to show more hospitality to migrants.

“The dignity of human beings is at stake,” said the statement signed by Archbishop Georges Pontier of Marseille, conference president, Cardinal Andre Vingt-Trois of Paris and eight others.

Catholics in France should change their attitudes to migrants and “overcome their prejudices and fears,” the bishops said.

“For many reasons, often very dramatic — wars, poverty, climate disruption — many are forced to leave their country where they cannot live,” they said.

“It is not possible to close in on ourselves and ignore the misery of so many men, women and children around the world who seek only to live in dignity,” they added. “We urge our leaders to intensify international cooperation to meet the challenges. Europe must especially take responsibility and call the constituent countries to provide a real response.”

The same day, the German bishops’ conference and the Protestant Evangelical Church in Germany issued a joint statement pleading for a “more generous reception of refugees from the Middle East in Germany.”

The churches also called on Germans to do more to assist those refugees remaining in camps across the Middle East.

“The people of Syria and Iraq now need our help and our solidarity, said Cardinal Reinhard Marx of Munich and Freising, president of the German bishops’ conference. “Please support the work of aid agencies in the region.”

On June 16, Cardinal Angelo Bagnasco of Genoa, Italy, president of the Italian bishops’ conference, along with eight bishops of Liguria province along the French border issued a statement in response to the growing number of migrants attempting to cross into France, where they had been refused entry.

They asked Catholics to open their hearts “to these brothers and sisters in humanity, so sorely tried and in search of a better and safer life.”

They also demanded that the EU act swiftly so Italy was not left to cope with the influx of migrants alone, decrying the response of many EU states to the crisis as “hard-hearted and indifferent.”

The Vatican made its own intervention on the eve of the meeting of EU ministers. Archbishop Silvano Tomasi, who heads the Holy See’s Permanent Observer Mission to the U.N. in Geneva, told the world body in Geneva the international community was ineffectively managing migration.

Noting that since January, 1,800 migrants had died while attempting to cross the Mediterranean, he said that “search and rescue operations should continue and be further strengthened, as the need to protect the right to life of all, regardless of their status, must remain the priority.”

He called for resettlement in Europe and other parts of the world to be “effectively carried out and more fairly distributed, with due attention for security and social needs, but without acquiescing to irrational populist pressures.”

Such populist pressures are evident in the U.K., where migration has become such a potent political issue that Prime Minister David Cameron, a conservative, won the May general election only after he promised a referendum on whether Britain should exit the EU in order to control its borders.

Royal Navy vessels are involved in search and rescue operations in the Mediterranean with one British ship plucking 1,200 migrants from flimsy boats off Libya in a single day. However, the British government is sensitive to the rise of anti-immigration sentiments among the electorate in reaction to the relocation of some 300,000 internal EU migrants to the U.K. each year.

It has therefore refused to accept any migrants crossing the Mediterranean, pledging to tackle the problem “at source” instead, a policy which was described as “horrible” by Auxiliary Bishop William Kenney of Birmingham, former chairman of Caritas Europe who about a decade ago personally helped in the recovery of the bodies of a number of drowned migrants from beaches in Spain.

Bishop Kenney told CNS that “people do just not realize the horror and the poverty that these people are fleeing from.”

“We have an obligation to look after these people … the reason being that they are men and women made in the image of almighty God,” he said.

The plan for quotas, which is also opposed by Slovakia, Hungary and the Czech Republic, will be discussed at a summit of the 28-member EU June 25-26.

NEXT: Sister Nirmala Joshi, successor to Blessed Teresa, dies at 81