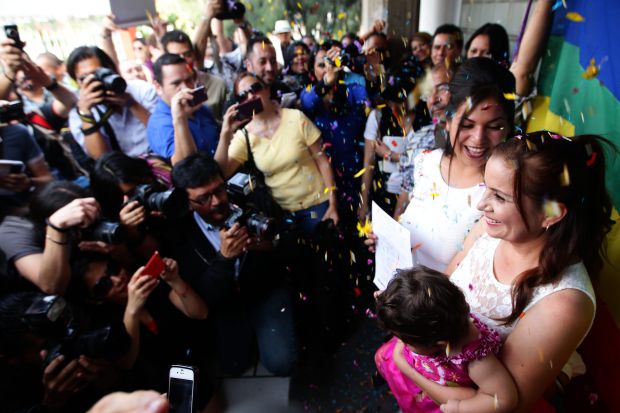 MEXICO CITY (CNS) — Mexico’s Supreme Court has declared state-level laws, defining marriage only as the union of a man and a woman, discriminatory and unconstitutional. The decision, in effect, legalizes same-sex marriages in all 31 of the country’s states.

The court’s decision, published June 19 in the Judicial Weekly journal, said “procreation” was not a purpose for marriage and therefore limiting marriages to heterosexual couples amounted to discrimination against other couples seeking marriage.

Current civil codes remain intact for the time being, but same-sex couples wishing to marry are able to obtain injunctions against the laws limiting marriages to heterosexuals.

The Mexican bishops’ conference expressed disappointment with the court’s decree and said it disagreed with its reasoning.

The bishops reiterated their conviction that the family, founded on the marriage of a man and a woman with “reproductive ability” guarantees “the survival of society.”

Their conviction “does not correspond with the Supreme Court creating new forms of marriage, because it would no longer be a marriage, rather another type of union,” the June 18 statement continued. “While we value that no one should be subject to discrimination, as the first article of the constitution states, this does not mean that the essence of marriage should be modified.”

In its published ruling, the court said, “Since the purpose of marriage is not procreation, there is not a justified reason that the matrimonial union be heterosexual, nor that it is stated as ‘between a man and a woman.’ Such a statement proves discriminatory, based on the sexual orientation of the person.”

Mexico City approved same-sex marriage in 2009, making it the first jurisdiction in Latin America to do so. The Supreme Court upheld the law in 2010 and ordered all other states to honor matrimonies performed in the capital.

The law was approved by the local legislature and upheld by the court in spite of intense opposition from the Archdiocese of Mexico City, which especially objected to a decision allowing same-sex couples to adopt children.

Mexico City changed its marriage rules during a period of discord between the archdiocese and local government. Abortion and euthanasia also were decriminalized during the period. The northern state of Coahuila is the only other state to approve same-sex marriages, although such unions also occur in the southeastern state of Quintana Roo, where the civil code omits any reference to the gender of the participants.

Since 2010, lawyers working for same-sex couples wishing to marry have successfully sought individual injunctions against laws not allowing same-sex marriages. They have routinely won their cases, making same-sex marriages possible throughout Mexico, though the process can be convoluted and costly.

The northern Diocese of Saltillo, in Coahuila state, has shown support for the gay community by organizing a pastoral outreach and celebrating Mass for its members on a monthly basis.

With the issue of marriage, “there has always been an interest (in the gay community) in that being an option,” said Father Robert Coogan, an American priest in Saltillo and spiritual adviser in the program.

The community’s interest in expanding marriage laws, he said, was to offer legal protections to same-sex couples and extend to them the rights to benefits such as their partner’s health coverage, but also to say, “We want this to show that our sentiments are real and deserve respect.”

NEXT: Pope says homilies must give people word of God, not ‘nice conferences’