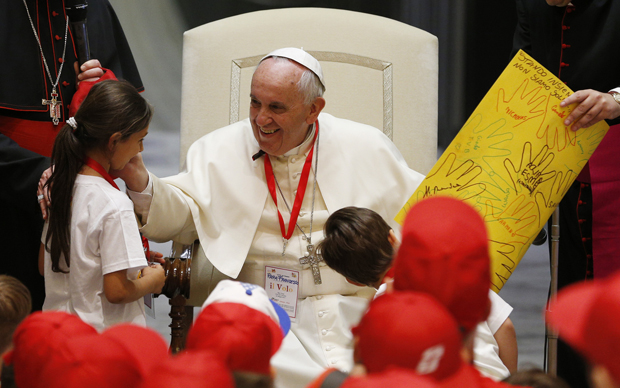 Pope Francis greets a girl after accepting a gift from her during a meeting with children of Italian prisoners in Paul VI hall at the Vatican May 30. (CNS photo/Paul Haring) 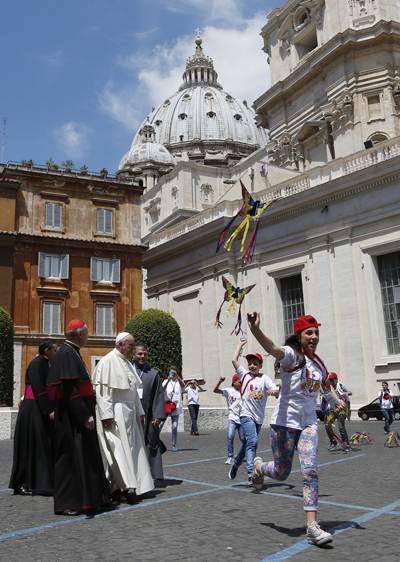 Pope Francis watches as children of Italian prisoners fly kites before their audience with the pope in Paul VI hall at the Vatican May 30. (CNS photo/Paul Haring)

VATICAN CITY (CNS) — Sometimes, Pope Francis said, the most important thing parents of a seriously ill child can do is to keep asking God, “Why?”

A child of 2 or 3 years will torment his or her parents with a continual series of “whys,” the pope said. The little ones are not looking for answers as much as they are seeking the attention of mom or dad.

“We can ask the Lord, ‘Why, Lord? Why do children suffer? Why this child?’ The Lord will not respond with words, but we will feel his gaze upon us and this will give us strength,” Pope Francis told the parents of 20 seriously ill children.

The pope met the children and their parents the evening of May 29 in the chapel of the Domus Sanctae Marthae; the group participated in a Catholic-sponsored pilgrimage to the Marian shrines at Loreto and Lourdes.

Admitting, as he has before, that “many times in my life I’ve been a coward,” he told the parents he is in awe of their courage and “heroism.”

Parenting a seriously ill child, he said, “is a journey of courage, the path of the cross.”

A little girl named Mascia greeted the pope on behalf of the children, who were from 2 to 14 years old, and assured him of the prayers of the group he met in 2014, some of whom are now “in heaven.”

One of the fathers, Andrea Maria, told the pope about his wife’s difficult pregnancy and how doctors had recommended an abortion. They refused, he said, because he and his wife felt God was calling them to an even greater love.

“A problem can never, ever be resolved by getting rid of someone,” the pope said. “That’s what the Mafia does: ‘There’s a problem, get rid of him.'”

Pope Francis told the parents that just as the real presence of Jesus in the Eucharist is a mystery, so, too, is the suffering of children.

“You might ask, ‘But you are a bishop who studied a lot of theology, don’t you have anything else to say?’ No,” the pope said. “The Trinity, the Eucharist, the grace of God, the suffering of children are all mysteries.”

Pope Francis says he often thinks about Mary at the moment when “they gave her the dead body of her son wounded, spat upon, bloody, dirty. What did she say? ‘Take him away’? No. She embraced him, caressed him. Even Mary did not understand. In that moment, she remembered the words the angel had said, ‘He will be king, he will be great, he will be a prophet.'”

Mary, he said, must have felt confused and even betrayed.

“Do not be afraid to ask God why, to challenge him,” the pope told the parents, but “keep your hearts open to receive his fatherly gaze. The only thing he might be able to say is, ‘My son suffered, too.'”

Pope Francis was back with another group of children the next morning. The Italian youngsters, some of whom were born in prison and all of whom have at least one parent in jail, were treated to a special train trip thanks to the Pontifical Council for Culture.

Flying and dreaming were the themes of their activities and their fast-paced conversation with the pope. They began their meeting with him by flying kites in the cleared parking lot next to the Vatican audience hall.

Some of the little ones got up before dawn to board in the train in Bari, a town in southern Italy. Encouraging all the kids to gather close around him, he invited the exhausted ones to take a little nap on the rug where his chair was.

The pope asked them, “Is it true that you flew today?” They shouted, “Yes.” And he said, ‘One of you explain to me. How did you fly?” A little boy said, “By dreaming.”

Pope Francis asked the children if they could describe a child who is unable to dream. They said such a person would be unhappy and would have a heart of stone.

Catching the pope’s attention, one little girl said a heart hardens or becomes ice when “we don’t listen to the Word of God and to Jesus.”

NEXT: Coming papal letter on environment has a name: ‘Praised Be’