Pope tells parents to be mindful of children’s suffering 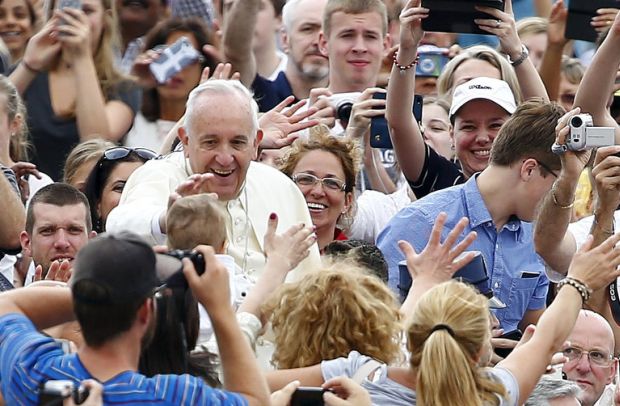 VATICAN CITY (CNS) — The deep hurts that spouses inflict on each other cause great suffering to their children and, in some cases, lead to a separation that is “morally necessary” to protect spouses and children from more serious forms of violence, Pope Francis said during his general audience in St. Peter’s Square June 24.

Continuing a series of talks about the family, the pope reflected on the hurts family members cause each other, calling this type of behavior “the ugliest thing.”

The pope said every family has experienced moments when someone’s “words, acts and omissions” offend another and “rather than expressing love, diminish it or worse still, demean it.”

“When these hurts, which can still be put right, are neglected, they get worse,” he said. “They turn into arrogance, hostility, contempt. And at that point, they become deep lacerations that divide husband and wife, leading us to look elsewhere for understanding, support and consolation. But often these ‘supports’ do not think of the good of the family.”

When marriages are emptied of conjugal love, resentment grows and the disintegration of the spousal relationship “caves in” on the children, he said.

“Notwithstanding our apparent evolved sensitivity and all of our refined psychological analyses, I ask myself if we have not become anaesthetized to the wounds in the souls of children,” he said.

The pope added that “the more parents try to compensate with gifts or treats … the more painful and profound” the wounds in a child’s soul become.

He questioned aloud whether adults still know what a wounded soul is and if they have a sense of the “weight of the mountain that crushes a child’s spirit in families in which people treat each other badly and hurt each other” to the point of breaking-up a marriage. He urged parents to consider the weight of their choices and mistakes on their children.

“When adults lose their heads, when each person thinks of themselves, when dad and mom hurt each other,” children suffer greatly and “experience a sense of desperation,” he said.

These wounds “leave their mark for life” and “many times children hide to cry by themselves,” he said.

Speaking of the interconnectedness in families, he said one person’s woundedness affects the entire family.

The account in the Gospel of Matthew in which Jesus admonishes adults not to scandalize children offers a better understanding of the responsibility to protect the marriage bond, which is the foundation of family life, he said.

“It is true, on the other hand, that there are cases in which separation is inevitable,” he explained. “Sometimes it can become even morally necessary,” when it comes to removing a spouse or children “from more serious injuries caused by insolence and violence, humiliation and exploitation, neglect and indifference,” he said.

However, he noted that some separated spouses remain true to their marriage bond and do not enter into other relationships.

“There is no lack, thank God, of those who, although separated, sustained by faith and love for their children, witness to their faithfulness to a bond in which they believed, insofar as it seems impossible to revive it,” he said.

“Not all separated spouses, however, feel this vocation,” he said. “Not everyone recognizes, in (their) solitude, a call of the Lord addressed to them.”

The pope continued noting that “around us we find various families in so-called irregular situations,” adding he does not like the term. He said these situations lead to “many questions,” such as how to help and accompany these people.

Without offering any answers, the pope said, “We ask the Lord for a great faith to see reality with the gaze of God, and great charity to draw close to people with his merciful heart.”

NEXT: Without enough priests, U.S.-based Paulists decide to leave Canada