Pray for justice, terrorists who kill in name of God, says cardinal 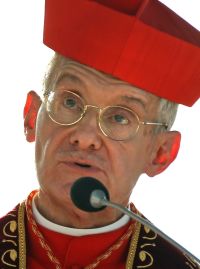 VATICAN CITY (CNS) — Christians and Muslims should pray for those who have “deviated from the true path of life” and kill in the name of religion, said Cardinal Jean-Louis Tauran.

“Our prayer is much needed: for justice, for peace and security in the world,” as well as for those who “commit violence in the name of religion, so as to return to God and change (their) life,” said the cardinal, president of the Pontifical Council for Interreligious Dialogue.

Cardinal Tauran’s annual message to Muslims for Eid al-Fitr, the feast marking the end of the monthlong Ramadan fast, was published by the Vatican June 19. Ramadan will end on or around July 17 this year.

The message was titled, “Christians and Muslims: Together to counter violence perpetrated in the name of religion,” and it called for renewed efforts, especially in education and law enforcement, to foster respect for human life and protect people’s rights.

Unfortunately, many ethnic and religious communities around the world, he said, have had to face killings, rapes, enslavement, forced emigration and trafficking, even of human organs and cadavers.

“We are all aware of the gravity of these crimes in themselves,” he said. But what “makes them even more heinous” is the attempt to justify such barbarity in the name of religion. “It is a clear manifestation of instrumentalizing religion for gaining power and richness,” he said.

Nations and communities have a duty to protect their residents and their property “from the blind violence of terrorists,” he said.

But leaders, schools, families and the media also have a responsibility in education, because “violence and terrorism are first conceived in the mind of the deviated persons.”

“All those (who) are involved in the education of the youth and in the various educational spaces should teach the sacred character of life and the derived dignity of every person, regardless of his or her ethnicity, religion, culture, social position and political choice,” the cardinal wrote.

“There is no life that is more precious than another one because it belongs to a specific race or religion,” he wrote. “Therefore, no one can kill. No one can kill in the name of God; this would be a double crime: against God and the very person.”