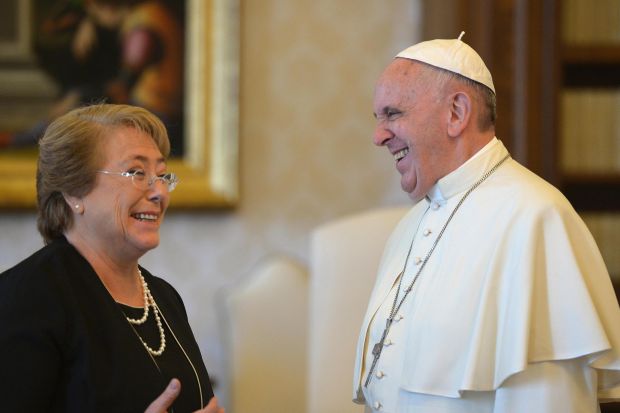 VATICAN CITY (CNS) — As Chilean President Michelle Bachelet was meeting Pope Francis June 5, a dozen people dressed all in white laid in the form of a cross in St. Peter’s Square.

The demonstrators, along with a dozen others who were holding little white boxes marked with a cross, wanted to call the world’s attention — and particularly the attention of Bachelet — to the victims of abortion.

Some of the demonstrators were from Chile and have participated in demonstrations of women dressed in white, known as the “Mujeres de Blanco,” who have been protesting Bachelet’s introduction of a law to legalize abortion up until the 12th week of pregnancy. The law is still being discussed in Chile’s congress.

The demonstrators from Chile were joined by Chileans living in Rome and by several Italians, including priests and nuns, who led the entire group in prayer in the square.

In a statement, the Vatican said the two spoke about “issues of common interest such as the protection of human life, education and social peace.”

“In this context, emphasis was placed on the role and the positive contribution of Catholic institutions in Chilean society, especially in relation to human promotion, education and assistance to those most in need,” the Vatican statement said.