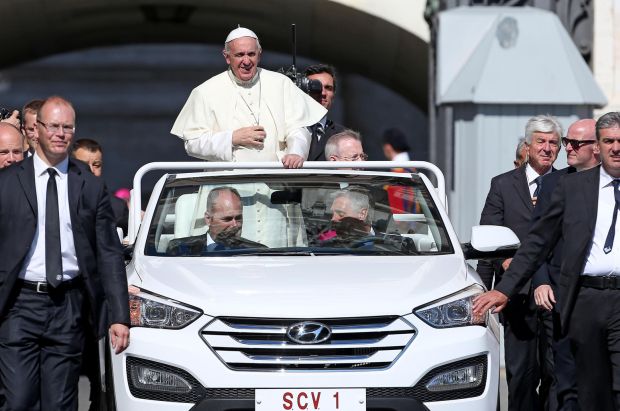 Pope Francis rides in his popemobile during his weekly audience in St. Peter's Square at the Vatican June 3. (CNS photo/Alessandro Di Meo, EPA)

The vehicle sits lower than the typical popemobiles, which had higher ground clearance or a raised bed to offer crowds maximum visibility of the pope, who stands or sits in the back.

Pope Francis rode in two types of South Korean-made open popemobiles during his visit to the South Korea last year: a Kia Carnival and a Hyundai Santa Fe.

Apparently, the pope’s security detail liked the Hyundai’s narrower body, according to a source familiar with the situation, because it allowed guards to stay alongside the car even when it is making a tight turn or traveling down a narrow lane.

The car has two seats up front and three seats in the back; the rear-seat passengers — including the pope — descend from a side door that has a retractable step.

World carmakers have been donating luxury or high-end utility vehicles to the Vatican to be used by the pope since 1909 — not long after the advent of the first “modern” automobiles.

The Santa Fe is the first custom-made, open-topped Hyundai in the papal garage, which has been dominated largely by Mercedes-Benz.

Hyundai did play an April Fool’s joke on the motor world in 2009 when it announced in a press release the launch of a new eco-friendly i10 city car model that looked like a white popemobile; the license plate read: V47ICAN.

Specially tailored for “global leaders,” the spoof vehicle met tough recycling and sustainability standards by making the armored exterior out of “fully organic material. The ‘string’ part of runner beans is actually lighter and stronger than Kevlar when woven into matting and encased in resin made from tree sap,” the carmaker joked.

NEXT: South Sudan churches begin own plan to bring peace to war-torn country