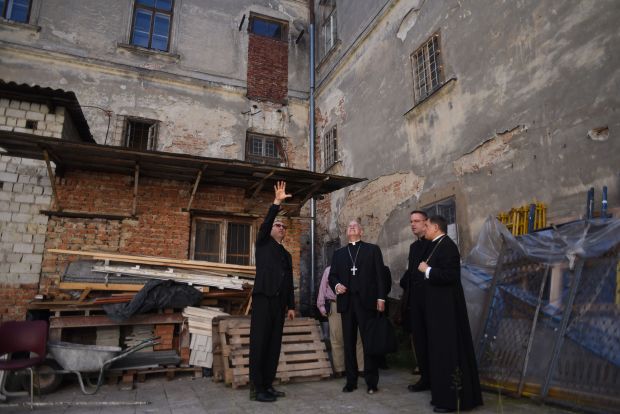 Archbishop Mieczyslaw Mokrzycki of Lviv, Ukraine, and Father Andriy Lehovych show Archbishop Joseph E. Kurtz of Louisville, Ky., president of the U.S. Conference of Catholic Bishops, and Msgr. J. Brian Bransfield, USCCB associate general secretary, the poor conditions of a Ukrainian seminary in Kharkiv June 22. The building was confiscated by the former Soviet regime, but only a small chapel in the structure was returned to Roman Catholic officials after Ukraine gained its independence in 1991. (CNS photo/Markiian Lyseiko)

A delegation from the U.S. Conference of Catholic Bishops got to see for themselves the progress that Roman Catholic and Ukrainian Greek Catholic communities were making during a fact-finding trip June 20-24.

At almost every stop, the five-member delegation had to step around construction supplies and equipment. Even the Kiev residence of Ukrainian Catholic Major Archbishop Sviatoslav Shevchuk of Kiev-Halych, where the delegation stayed, remains under construction.

But the group did not seem to mind.

“I see the growth, the energy and zeal of the church in Ukraine,” said Archbishop Joseph E. Kurtz of Louisville, Kentucky, USCCB president, during one of the stops June 22. He told Catholic News Service that he was aware of many of the projects funded by the bishops’ annual collection for the church in central eastern Europe, but seeing them firsthand provided a new perspective.

“The church buildings themselves are visible signs of the faith that is in the hearts of people,” he said. “So when I see the cathedral, which is prominent, when I see a pastoral office of the church, they are symbols of the great growth within the life of the church.”

The reconstruction and renovation has continued since 1991, when Ukraine received its independence from the former Soviet Union and some church property was returned to church leaders. However, the need for church facilities remains great because communities of the faithful are growing.

The growth and development is noticeable especially in eastern Ukraine, where the Orthodox Church is dominant and Roman Catholics and Ukrainian Greek Catholics are small minorities. But the setting is not without its challenges as the delegation, which included Archbishop Blase J. Cupich of Chicago, chairman of the bishops’ Subcommittee on Aid to the Church in Central and Eastern Europe, learned.

For example, it took Father Mykhajlo Semenovych, rector of a small chapel, which now serves as the cathedral for recently ordained Ukrainian Catholic Bishop Vasyl Tuchapets of Kharkiv, several years to obtain the piece of land from the local government for construction. He said the project was delayed because it was opposed by local Orthodox officials.

So while the land has been in hand since 1999 and the temporary chapel was built, cathedral construction has been slow and only a basement is in place. Funding and permits are being sought to continue. Father Semenovych said the faith community has grown faster than the church structure.

The presence of many young people in the Ukrainian Catholic parish makes the community vibrant. Maria Mytko is one member. She studies in a local music school and leads the parish choir. She recently placed second in a church-sponsored singing contest.

Father Ihor Tabaka and his wife Iryna, who came to Lubotyn, 10 miles outside of Kharkiv, as missionaries in 2006, faced another challenge. He said many people in the region still hold stereotypes about Catholics. A church building, he explained, is crucial for the pastoral work because a faith community without a proper building is considered a sect by others.

Similar growth is being experienced in both Catholic churches in western Ukraine.

In Lviv, the Ukrainian Catholic University is developing a new campus in an ambitious project. Student residence and multipurpose buildings already are in use and construction of a campus church will be completed by the end of the year. Work on a new library recently started.

About 200 students, a dozen resident fellows and three Redemptorist nuns who help with pastoral programs live in the student residence.

The school also has welcomed a group of people with mental disabilities. Bishop Borys Gudziak, university president, calls them “professors of human relations.” He believes they can teach trust and openness to the students who still feel the trauma of the Soviet past.

Archbishop Kurtz said their presence makes the university a distinctive place after the delegation’s June 22 visit.

Elsewhere in Lviv, the Roman Catholic Church is finishing renovation of the historic Our Lady of Perpetual Help Chapel, located in a deteriorating seminary building. The Dominican-run chapel serves as the pastoral center for students and youth. The chapel’s walls are decorated with frescoes by Polish-born painter Jan Henryk de Rosen that are being restored with the help of the Polish culture ministry.

The chapel was the only room in the building confiscated by the Soviet regime and that has been returned to the Roman Catholics. Church officials hope to get back the rest of the building before it collapses.

Archbishop Cupich said the USCCB was pleased to be able to assist with such projects as well as others in eastern and central Europe.

“The damage done not only to economy and country but the human spirit is going to take a long time to overcome,” Archbishop Cupich told CNS.

He said the U.S. bishops fund projects that create capacity for Catholic communities and that seeing the Roman and Ukrainian Catholic churches taking charge of the reconstruction efforts points to a sustainable future for such efforts.

NEXT: Ecuadoreans expect pope will address care for creation during July visit