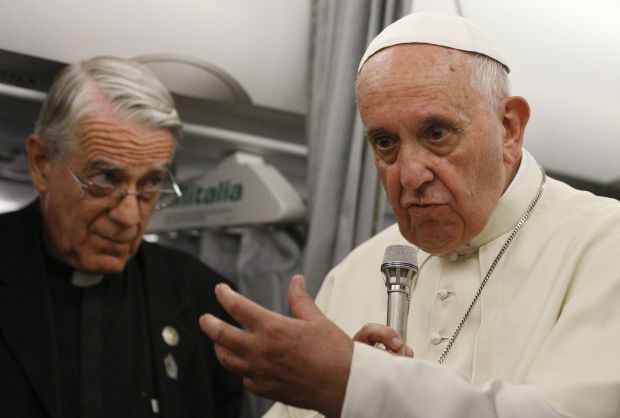 Pope Francis speaks to journalists aboard his flight from Sarajevo, Bosnia-Herzegovina, to Rome June 6. At left is Jesuit Father Federico Lombardi, the Vatican spokesman. The pope announced on the return flight that a decision soon will be announced concerning alleged Marian apparitions in Medjugorje, Bosnia-Herzegovina. (CNS photo/Paul Haring)

The Congregation for the Doctrine of the Faith met recently to discuss the issue and “we’ve reached the point of making a decision and then they will say,” he told journalists on the flight back to Rome June 6.

The expected announcement will include “just some guidelines (the congregation) will give to the bishops,” he said in response to a reporter’s question.

An international commission of cardinals, bishops, theologians and other experts, working under the auspices of the doctrinal congregation, was set up in 2010 to investigate the claims of six young people who said Mary had appeared to them daily beginning in 1981. The apparitions purportedly continue and thousands travel to the small town each month to meet the alleged seers and to pray.

After a few years, the commission completed its study in which the members “did a beautiful job, a beautiful job,” Pope Francis said at the end of his one-day visit to Sarajevo.

For years the local bishop, Bishop Ratko Peric of Mostar-Duvno, has said he believes nothing supernatural is happening in Medjugorje.

While the Vatican has said dioceses should not organize official pilgrimages to Medjugorje, it has said Catholics are free to visit the town and pray there, and that the Diocese of Mostar-Duvno and the Franciscans should organize pastoral care for them.

Pope Benedict XVI had reaffirmed that the church never requires the faithful to believe in apparitions, not even those recognized by the church.