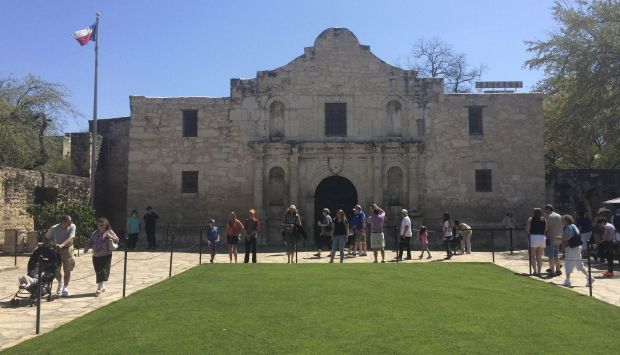 Visitors walk in front of the Alamo, the most-visited tourist site in Texas March 2. The United Nations named the Alamo and the four other Spanish colonial missions in San Antonio as a World Heritage Sites. (CNS photo/Lisa Maria Garza, Reuters)

“They are still a haven of culture and history,” he said in a statement July 6. “We especially value that they continue as active parishes of the archdiocese, where hundreds of families on the city’s south side continue to gather for prayer within the original walls, which many dedicated persons have worked to preserve over the years.”

They now join a list of over a thousand properties designated as World Heritage Sites, including the Grand Canyon, Yosemite National Park and the Statue of Liberty in the U.S., the prehistoric Stonehenge monument in England and the Angkor Wat temple complex in Cambodia.

The UNESCO website explained the criterion the missions met for such a designation: “to exhibit an important interchange of human values, over a span of time or within a cultural area of the world, on developments in architecture or technology, monumental arts, town-planning or landscape design.”

They were constructed by Spanish missionaries in the 1700s and “illustrate the Spanish Crown’s efforts to colonize, evangelize and defend the northern frontier of New Spain,” the site said. They also feature “architectural and archaeological structures, farmlands, residencies, churches and granaries, as well as water distribution systems.”

The five frontier mission complexes can be found along the San Antonio River basin in southern Texas.

“The San Antonio Missions are also an example of the interweaving of Spanish and Coahuiltecan cultures, illustrated by a variety of features, including the decorative elements of churches, which combine Catholic symbols with indigenous designs inspired by nature,” it added.

The missions were the only submission for world heritage status this year from the United States.

According to a February 2014 story in Today’s Catholic, newspaper of the San Antonio Archdiocese, the process for nominating the San Antonio Missions for the designation took more than seven years.

A compelling package of material had to be compiled to make the case that San Antonio’s 18th-century string of mission complexes met UNESCO’s criteria.

The final 344-page dossier included highly detailed maps, photos, slides, plans and extracts, along with extensive bibliography and glossary and was accompanied by audio-visual materials. The properties’ history, authenticity, integrity, state of conservation, management and guidelines for protection and monitoring were all detailed.

The materials were sent in January 2014 to the Paris headquarters of UNESCO’s World Heritage Committee. A final step in the process was an on-site inspection.