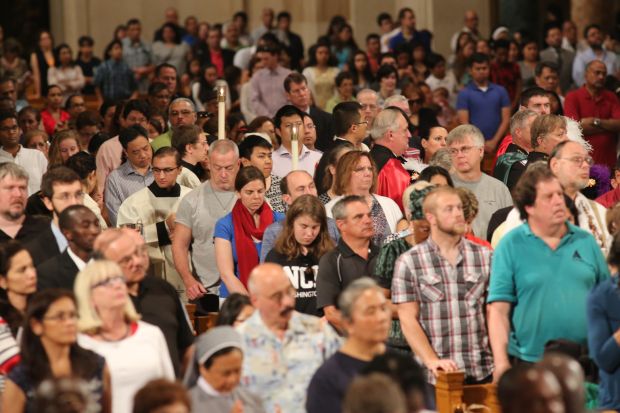 People attend a July 4 Mass at the Basilica of the National Shrine of the Immaculate Conception in Washington on the final day of the U.S. bishops' Fortnight for Freedom campaign. (CNS photo/Bob Roller)

WASHINGTON (CNS) — Religious freedom is “the human right that guarantees all other rights,” Miami Archbishop Thomas G. Wenski said July 4 in his homily at the closing Mass of the U.S. bishops’ fourth annual Fortnight for Freedom.

That right “has its foundation in the very dignity of the human person,” he said at the Basilica of the National Shrine of the Immaculate Conception in Washington. “Peace and creative living together will only be possible if freedom of religion is fully respected.”

Two recent events have given U.S. Catholics both the opportunity and duty, he said, “to engage the world and witness to our teachings, to our vision of the life and dignity of the human person in a world which we recognize as both fallen and redeemed.”

Archbishop Wenski referenced Pope Francis’ encyclical on the environment, “Laudato Si’, on Care for Our Common Home” and to the U.S. Supreme Court’s 5-4 decision that legalized “so-called same-sex marriage” across the country.

The Catholic Church’s teaching embraces what the pope in his encyclical “has called an ‘integral ecology,'” a natural and human ecology, the archbishop said.

“An integral ecology demands that rain forests be protected — because of what they do potentially and actually for the flourishing of the human species on this earth,” Archbishop Wenski continued. “Likewise, an integral ecology tells us that marriage, understood for millennia as a union of one man and one woman, ought to be respected and protected.”

Cardinal Donald W. Wuerl of Washington was the main celebrant of the Mass that brought to an end the fortnight observance, which had as its theme this year “Freedom to Bear Witness.”

Among the 30 or so priests concelebrating were Msgr. Walter R. Rossi, rector of the national shrine, and Msgr. Ronny Jenkins and Msgr. J. Brian Bransfield, general secretary and associate general secretary, respectively, of the U.S. Conference of Catholic Bishops. 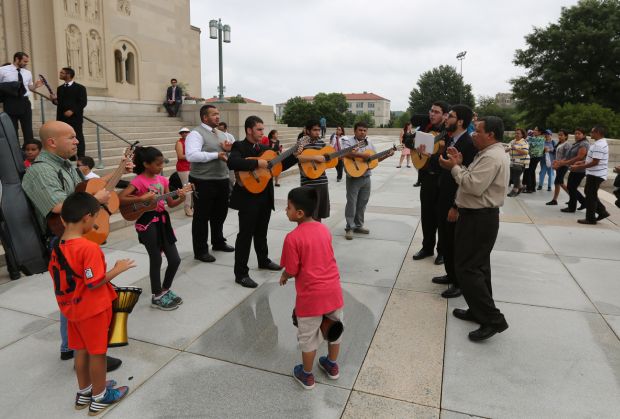 People sing and dance July 4 outside the Basilica of the National Shrine of the Immaculate Conception in Washington before attending a Mass on the final day of the U.S. bishops’ Fortnight for Freedom campaign. (CNS photo/Bob Roller)

It is clear the nation faces challenges to religious liberty, “one of our most cherished freedoms as Americans,” Msgr. Rossi said in welcoming remarks. “The freedom to live our lives according to our faith is fundamental, enshrined in the First Amendment.”

Religious freedom is under stress throughout the world, Archbishop Wenski said in his homily.

The International Society for Human Rights reports that “atrocities are committed against peoples and institutions of all the world’s religions,” he said, but it also notes that “80 percent of all acts of religious discrimination in the world today are directed at Christians. Some 150,000 Christians are killed for the faith every year.”

In liberal Western democracies, he continued, “discrimination against religion in general and Catholic Christianity in particular is growing — albeit in perhaps more sophisticated and less violent ways.”

Archbishop Wenski said a “hard despotism is decimating the Christian populations of the Middle East.”

In the U.S. and other Western countries, “people of faith are being increasingly subjected to a soft despotism in which ridicule, ostracism and denial of employment opportunities (or) advancement are being used to marginalize us,” added the archbishop, who is chairman of the U.S. bishops’ Committee on Domestic Justice and Human Development.

“We see this when butchers and bakers and candlestick-makers are being put into the legal dock for refusing to renounce their religious beliefs” about traditional marriage, he said.

Archbishop Wenski said the Catholic Church by upholding its doctrine and serving all those in need illustrates the day’s reading from St. John’s Gospel about Jesus teaching his disciples that they were in the world and not “of the world,” but never against the world.

Jesus “calls us to be always for the world,” the archbishop said, which “explains why the church is concerned with education, with health care; it explains our involvement in civic affairs and why we define politics as something honorable and as a legitimate, and even noble, vocation for the Christian … why we as a church advocate for the poor and seek greater economic and social justice for all.”

The Catholic Church, he said, is committed to upholding “the dignity of every human life from the moment of conception until natural death, to the family built on marriage understood as a permanent and exclusive union of one man and one woman, to the right ordering of society for the common good and in conformity to the natural law because she feels that such commitments help promote human flourishing.”

Because of religious freedom, Catholics prospered in America, he said. “We built parishes, schools, hospitals, orphanages and other charitable institutions; we started businesses; we served honorably in our nation’s wars.”

Now courts in the U.S. and other Western countries “are chipping away,” he said, at that original meaning of religious freedom to reinterpret it narrowly as merely the “freedom to worship,” excluding freedom to serve and witness, and “to delegitimize the church’s participation in the public debate.”

Religious freedom also must protect institutions “that nourish the individual’s free exercise of religion,” he said.

Faith communities always have been able “to play an active role in society and express their own vision of the human person and of the policies that rule society,” he explained, noting that civil rights movement of the 1960s, for example, was a “religiously inspired movement.”

“Some today resent the public advocacy of religious people and communities,” Archbishop Wenski said. “They accuse us of trying to impose our views on others. Yet, as St. John Paul II explained, the church does not impose, she proposes.”

On Independence Day, he said, “we remember that the glory of our government is its protection of religious freedom.”