Joy ‘palpable’ for those welcoming first-class relic of St. Augustine 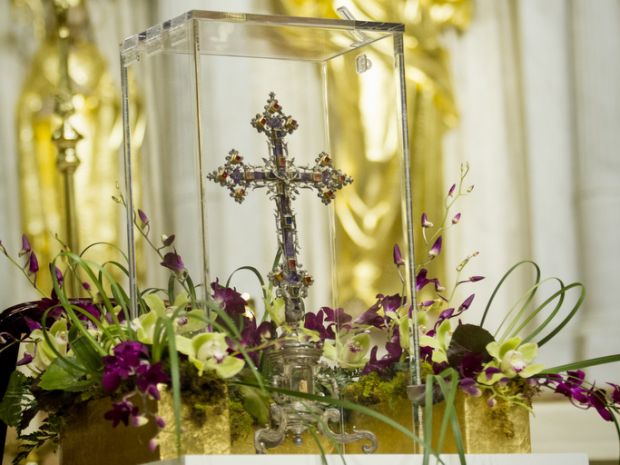 A first-class relic of St. Augustine of Hippo, patron saint of St. Augustine, Fla., is displayed during a July 7 vespers at the Cathedral Basilica of St. Augustine. It is on loan from the Vatican Treasury for the city and cathedral parish's 450th anniversary celebration. (CNS photo/Brandon Duncan, St. Augustine Catholic magazine)

ST. AUGUSTINE, Fla. (CNS) — More than 500 people at a July 7 vespers service at the Cathedral Basilica of St. Augustine greeted a first-class relic of the saint that is the patron of the city, the cathedral basilica and the Diocese of St. Augustine.

The relic of St. Augustine of Hippo is on loan from the Vatican Treasury for the 450th anniversary celebration of the city and cathedral parish.

As Deacon Charles Kanaszka carried the relic in procession, many who attended the ceremony captured the moment with camera phones in hand.

It is the first time the relic has been in the United States and it will be in the Diocese of St. Augustine through Sept. 30.

Father Thomas Willis, rector, later answered in his homily the question, “What’s all this fuss about a bone?”

“To understand why what we do tonight is important and the reason that our church is making a big deal about it, we first have to understand a key belief in Catholic-Christianity — the Incarnation,” he said.

He introduced the assembly to the Greek word for flesh, “sarx.”

“Over the centuries, some Christians have concluded that being human is nothing more than a sinful existence and therefore, humanity has very little hope of ever being able to escape this reality,” Father Willis said. “On the other hand, Catholic and Orthodox Christian theology comes at it from another way. Christ, the very Son of God came and fully shared in this ‘sarx’ — our humanity with all of the good that being in the flesh includes.”

At the veneration, some genuflected, others knelt briefly, making the Sign of the Cross, and many bowed their heads. Some approached alone, others in couples or in families. Afterward, many returned for a closer look or, to take photos of the relic — a knucklebone of a finger encased in a reliquary that is the shape of a silver and jeweled crucifix, with the inscription “Pope Pius X, 1904.”

Carol Ann Fox, a member of St. Anastasia Parish in St. Augustine, has seen relics in Lourdes, France, and Fatima, Portugal. “(A relic) is a nice reminder of what the church offers to us as its members. It is a blessing to be here,” she said.

Debbie Womack of Crescent Beach, who is a member of Corpus Christi Parish in St. Augustine, brought two of her grandsons from Jacksonville: Peter, 10, and Andrew, 9. They attend Assumption School.

“This was breathtaking for me, and it was truly, truly awesome,” she told St. Augustine Catholic, the diocesan magazine. “It’s mind-boggling … to know that the relic is here and will be here for the 450th anniversary. This is a blessing from heaven to our diocese.”

Peter said, “It was good. I was surprised that there were not as many people because it is its first time here in America.”

Cam Baker, an usher for the cathedral basilica, found the service “very moving.” It was the second time he has seen a relic, the first being that of St. John Paul II in 2014, also at the Cathedral Basilica.

Carole Gauronskas, also of the cathedral’s parish, focused on the altar as she said, “To me, it is overwhelming that we could have this given to us by the Vatican for two months.”

Father Willis later reflected on the event, too.

“It was just a wow night, I think, for the parish, and for everybody who was here from outside the parish,” he said. “You could see a palpable joy on the faces of the people and the singing was coming from their hearts. If the old Augustine phrase, ‘He who sings well, prays twice,’ is true, we certainly saw and heard this tonight.”

Father Willis first asked for a relic of St. Augustine more than four years ago. The planning and coordination between Vatican and Italian officials and the Diocese of St. Augustine culminated in June when the relic arrived at the Catholic Center in Jacksonville. This is the first time the relic has left Italy, Father Willis said.

St. Augustine’s connection to the city and the parish began Aug. 28 — his feast day — in 1565, when Spanish explorer Don Pedro Menendez de Aviles sighted land off Florida’s coast. He founded the new colony, St. Augustine, on Sept. 8, the same day the parish was founded.

The next public veneration was scheduled for July 15 at the cathedral basilica. There will be one more July date for veneration, July 29, and then four dates in August and four in September.