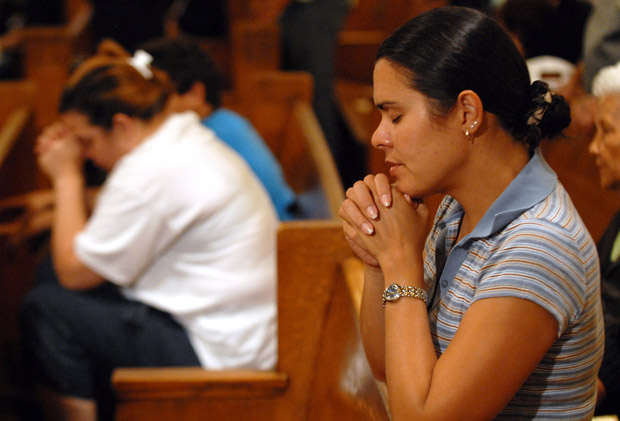 WASHINGTON (CNS) — More than half of young Catholic families participating in a recent survey identified themselves as Latino or Hispanic, a finding the president of Holy Cross Family Ministries said will require new ways of ministering in the U.S. Catholic Church.

Overall, 54 percent of young couples in the 25- to 45-year-old age range said they were Latino or Hispanic. That compares with the overall adult Latino/Hispanic Catholic population of 32 percent.

“People may speak English, but culturally they’re Latino. That’s a big piece of information. We’ll have to adjust the kinds of programs. It means we have to be more assertive in looking at the ways we can be of service to these families,” Holy Cross Father Willy Raymond said of the findings in the study his organization commissioned.

While Holy Cross Family Ministries is looking at ways to better meet the needs of Latino families, Father Raymond said the findings of the study will be of interest to the entire American Catholic Church as it attempt to ministers to all families.

The study, “The Catholic Family: 21st-Century Challenges in the United States,” examined the demographics, faith practices and media usage of 1,014 young families. It was conducted in fall 2014 by the Center for Applied Research in the Apostolate at Georgetown University.

The findings were summarized during the recent Catholic Media Convocation in Buffalo, New York. Detailed findings in each area were to be released monthly beginning in late July and concluding in September at the 2015 World Meeting of Families in Philadelphia.

The statistics in the study have a margin of error of plus or minus 3.1 percentage points.

What Father Raymond found surprising is that 68 percent of parents responded that they have not enrolled their children in a Catholic school, a parish school of religion program or a youth ministry program affiliated with a Catholic parish.

The study found that 42 percent of weekly Massgoers have a child enrolled in parish-based religious education compared with 27 percent of monthly attendees, 11 percent of those attending Mass a few times a year and 4 percent of those who rarely or never attend Mass.

“The number that is not exposing their children to catechesis is shocking to me. We’re aware this represents a really clear danger for the faith community in the future. It’s a place we really have to concentrate a lot of our time, energy and resources for the future,” Father Raymond said.

“The danger here, I think, is that for millennials it’s (Catholic education) not been a part of their life. From the number we see, they have not been catechized and so they don’t know the faith and have not developed love for the devotionals and practice of the Catholic faith,” he added.

Still, when it comes to prayer life, 71 percent of parents strongly agreed or somewhat agreed that prayer is essential to their faith.

However, the daily practice of prayer was limited to 36 percent of respondents. Another 23 percent said they pray less than daily but at least once a week, while one in five parents said the pray almost every week or once or twice a month. Nine percent said they rarely or never pray.

The study found that when parents do pray, 76 percent they do so alone. Seven percent said they pray more often with family members than alone while 17 percent reported praying alone and with family equally.

Father Raymond said the fact that nearly three-quarters of respondents continue to pray in some way was encouraging. At the same, he was concerned that people have “privatized their prayer life.”

“A lot of us do (pray privately). There’s an intimate part of our prayer life, but you’ve got to find expression in the community of the family,” he said. “This is another place for opportunity to encourage fathers and mothers to make a small step to pray with your spouse, maybe once a week or on a family night.

“We’ve got to encourage that this makes a difference in family life,” the priest said.

The study also explored family life, such as the practice of eating dinner together, television watching, social media usage and access to spiritual messaging various forms of media.

While Holy Cross Family Ministries will use the findings to design its own programs, Father Raymond said the organization will share the report with bishops and anyone working in parish ministries interested in improving outreach to families.

PREVIOUS: Kids volunteer at nuns’ cloister, learn about life behind the grille

NEXT: Prayers and sympathy shared after Tennessee shootings