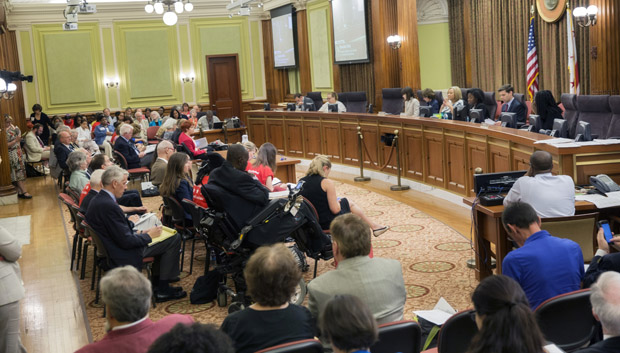 Members of the public attend a July 10 hearing at the Wilson Building in Washington. A Council of the District of Columbia committee heard testimony on the Death of Dignity Act of 2015 that would legalize assisted suicide in the nation's capital. (CNS photo/Jaclyn Lippelmann, Catholic Standard)

WASHINGTON (CNS) — Lawmakers in the District of Columbia are considering legislation that permits doctors to prescribe medications that would enable terminally ill patients to end their lives.

The Council of the District of Columbia’s Committee on Health and Human Services held a daylong hearing July 10 on the proposed Death with Dignity Act of 2015.

Lawmakers heard testimony from opponents and supporters of the measure that would allow doctors to legally prescribe a lethal dose of drugs to a patient who is deemed mentally competent and who has received a terminal diagnosis.

The bill was introduced by council member Mary M. Cheh. She said that if the proposal passed, it would offer terminally ill patients “a peaceful exit.”

“The law should not force upon a person a punishing death,” she said.

Opponents of the measure contend that a doctor should not kill patients in an effort to ease their pain.

“It’s a really bad idea for physicians who are in charge of bringing health and comfort to their patients to be looked upon by some patients as someone who might be the bringer of death,” said Dr. G. Kevin Donovan, director of the Pellegrino Center for Clinical Bioethics and professor at Georgetown University Medical Center.

The bill specifies that a physician may legally prescribe lethal drugs to patients who have been deemed mentally competent and who have received a terminal diagnosis of six months or less.

“We physicians know that predicting the duration of a terminal disease is nearly impossible to do accurately,” Donovan said. “Rather than enable our patient’s suicide, we should be improving palliative care and hospice options near the end of life. That would allow patients to truly live their final days with comfort and dignity.”

Those opposing the bill point out that it does not require doctors to give patients a screening for depression before providing them with the lethal prescription;the patient is not required to notify family members before taking the medication;and no doctor, nurse, or legal witness is required to be present when the lethal dose is taken.

“Our health care system is failing people with disabilities, including disabilities caused by terminal illnesses and this legislation is not the answer. We need to make sure people are receiving the supports they need in order to live in their own homes — not to create a new fast track toward death,” said Samantha Crane, director of public policy for the Autistic Self Advocacy Network. “People who need these supports shouldn’t have to die to have dignity.”

Crane also is a spokeswoman for No DC Suicide, a coalition of health care professionals, disability advocates, representatives of various faiths and concerned citizens that was formed to advocate against the District’s proposed Death with Dignity Act of 2015.

The No DC Suicide coalition stresses that it is impossible to accurately predict a patient’s terminal prognosis. It also said that the proposal before the district council does not have safeguards to ensure that a patient is not coerced into ingesting the drug, or to prevent another person from administering the drug.

Elaine Petty, a registered nurse and director of the Center for Bioethics and Culture and part of the No DC Suicide coalition, said that physician-assisted suicide would lead to “medical abandonment” at the very time people most need such support.

Dr. LaQuandra Nesbitt, director of the District of Columbia’s Department of Health, also told committee members that she opposed the measure because “a physician’s oath is to do no harm.”

She said that the legislation is vague and “catapults the District into uncharted territory we are not prepared to navigate.” She told lawmakers that the bill does not specify the type of lethal medication to be prescribed or outline what qualifications a doctor needs in order to be able to determine if a patient is terminal or is mentally competent.

Other medical professionals also urged the committee not to pass the legislation.

Cheh said she modeled her bill on the assisted suicide law in Oregon which allows doctors to prescribe medicines so that terminally ill patients may end their lives. That is that state where 29-year-old Brittany Maynard moved last year in order to terminate her life. The California woman, who was diagnosed with brain cancer, gained national attention as she advocated for “death with dignity” for terminally ill patients by publically announcing her decision to kill herself. She did so Nov. 1.

Diaz, who said he is a practicing Catholic, noted that he was “keenly aware of the doctrinal side of this” proposal, but added that “nobody should impose their doctrine on somebody else … and submit them to a brutal death.”

Council member Yvette Alexander, a Catholic and chairperson of the council’s Health and Human Services Committee, said that “the greatest human freedom is to live and die according to one’s belief,” but she conceded that “there are ethical, moral and religious issues that must be addressed.”

Seattle-based attorney Margaret Dore, president of the “Choice is an Illusion” human rights organization opposed to assisted suicide and euthanasia, also testified via telephone hookup. She said that under the proposed bill, a person can commit suicide and the “the death certificate is falsified and does not reflect the true cause of death” because it would list the person’s diagnosis and not suicide as the cause of death.

She also warned that “predicting life expectancy is not an exact science” and because of a “complete lack of oversight,” anyone can administer the lethal drugs to the terminally ill patient.

Council member LaRuby May, also a member of the committee hosting the hearing, noted that some residents in her ward are opposed to the measure and that “passion in opposition to this bill is very real.”

However, she dismissed that by saying such opposition “is based on fear.”

Michael Scott, director of the District of Columbia Catholic Conference, told the Catholic Standard, Washington’s archdiocesan newspaper, the Committee on Health and Human Services was accepting written testimony through July 24. After that, the committee will compile a report during the July 15-Sept. 15 legislative recess.