Papal trip for World Meeting of Families began 3 years ago 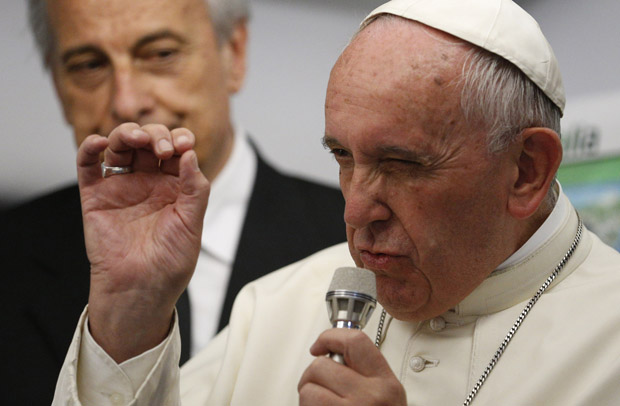 WEST PALM BEACH, Fla. (CNS) — The first traces of preparation for Pope Francis’ historic U.S. visit this September could be said to have started in Milan, Italy, in 2012.

In closing the Vatican-sponsored World Meeting of Families held there that year, Pope Benedict XVI announced that the 2015 gathering would take place in Philadelphia.

Right away, the Archdiocese of Philadelphia and World Meeting of Families organizers considered the possibility of a papal visit, which has often accompanied the family summit held every three years in a different host country.

Although at that time the event’s planners could not have known that Pope Francis would be at the Vatican helm in 2015, they laid out contingency plans in hopes the World Meeting of Families would draw a papal visit.

“The planning started right away in 2012 when we found out the archdiocese was being asked to host the meeting,” said Kenneth Gavin, Philadelphia’s archdiocesan director of communications.

Last November, the Vatican officially confirmed Pope Francis would attend the international family gathering, and the pope’s itinerary eventually expanded to include first a stop in Cuba, followed by Washington, New York City and finally Philadelphia.

Gavin noted that in Philadelphia alone, there are two papal trip planning bodies: one for the Sept. 22-25 World Meeting of Families under the direction of veteran communications professional Donna Crilley Farrell, and an archdiocesan effort for everything else concerning the Sept. 26-27 papal visit to Philadelphia, with a degree of overlap since the events are intertwined.

First, local church officials studied how other large cities managed the World Meeting of Families, and then started building planning teams, including civic partnerships with the city of Philadelphia, the U.S. government, national security and law enforcement agencies, the Philadelphia-based Franklin Institute — which will host a Vatican art exhibit through next year — along with other cultural and civic institutions, according to Gavin.

“Philadelphia is a big place and the life of the archdiocese has to go on, so we reached out to others — we wanted the best people we can get and who have worked with large groups of people, with security and transportation,” he said, noting that Philadelphia Archbishop Charles J. Chaput has brought an “incredible” amount of energy to the project.

“Over time, things grew organically and they continue to grow today,” Gavin said in an interview with Catholic News Service.

By mid-July, the archdiocese had a database of some 6,000 general volunteers, 500 volunteer media, language and church-related experts to staff a 115,000-square-foot media center planned for the Pennsylvania Convention Center.

A Host-A-Family program will augment some 11,500 Philadelphia-area hotel rooms, and financial pledges of $30 million will help offset costs associated with the papal visit there. Some 5,000 to 7,000 accredited journalists are expected to cover Pope Francis’ visit.

The pope’s outdoor closing Mass at Philadelphia’s Benjamin Franklin Parkway could draw more than 1.5 million participants. Pope Francis also is expected to meet with Hispanics and immigrants, and separately, with inmates at a correctional facility in the “City of Brotherly Love.”

In a June news conference about the pope’s stop in the nation’s capital, Cardinal Donald W. Wuerl of Washington said he and the archbishops of Philadelphia and New York City met with the Vatican papal advance team in each of the three cities in the U.S. and in Rome to chart out Pope Francis’ first U.S. visit. They were instructed to come up with their own “wish list” of locations and activities for Pope Francis during his travels.

The World Meeting of Families serves as the centerpiece of the papal visit — something the advance team made clear should not be overshadowed by planning any larger papal events elsewhere beforehand.

“We put together a schedule and then it went back to Rome,” Cardinal Wuerl told reporters, noting that estimates were made of how long it will take the pope to speak and engage with people at each of his stops, along with the transportation time and logistics between stops.

“Eventually, the advance team came back and said, ‘Here is where we are and let’s walk through it again,'” Cardinal Wuerl said, noting that nothing was firm until the pope’s official itinerary was made public June 30.

“Until the announcement, we were told: ‘You can plan, but remember this is all informal and unofficial, and it can be changed,'” the cardinal added. “There is always that little caveat that there can still be some fine tuning.”

The Washington portion of the visit eventually grew to include a Catholic Charities-related encounter with homeless people. The pope will visit President Barack Obama at the White House and address a joint meeting of Congress; those events are managed independently by those entities, including press credentialing for them.

Pope Francis also will celebrate a canonization Mass for Blessed Junipero Serra at the Basilica of the National Shrine of the Immaculate Conception.

As with the other locations, tickets to the pope’s events in the capital are limited and are mostly being distributed through local parishes. Members of the general public will be able to view a live broadcast of the pope’s remarks to Congress via Jumbotrons at the West Front of the Capitol.

Chieko Noguchi, director of media and public relations for the Archdiocese of Washington, said press credentialing for events the archdiocese is overseeing has been daunting.

Noguchi joined other church officials in predicting that media coverage of Pope Francis’ trip will likely exceed that of Pope Benedict’s 2008 visit to Washington and New York.

“We have so much interest from everything pope-related, and there are so many different meetings going on right now,” Noguchi told CNS. “We are still trying to determine media access balanced with security concerns along with the desire that as many people as possible can share in this historic event.”

Finishing touches still in flux included as-yet unannounced papal motorcade routes for those who want to get a glimpse of Pope Francis.

Since it is unlikely every journalist applying for credentials will be accommodated at each site and on media transportation buses, the U.S. Conference of Catholic Bishops will attempt to parse out journalist access strategically and as fairly as possible, according to Helen Osman, the USCCB’s secretary for communications who is now national coordinator of communications for the papal visit.

Much more so than during Pope Benedict’s 2008 visit, social media will play a greater role in the church communications strategy. In August, the USCCB will formally announce a new app, “The Catholic Church,” to provide visuals, audio and text of the papal visit.

The USCCB also contracted an outside company to provide live streaming and round-the-clock replay coverage of Pope Francis’ visit and which will be accessible via the USCCB website.

Pope Francis is expected to speak primarily in Spanish, so another planning priority has been to enlist sufficient bilingual staff to assist reporters with simultaneous translations of remarks by the pope, who often deviates from prepared texts. “In the past, the Vatican provided us with texts of the speeches in various languages for the journalists, so if he is speaking extemporaneously in Spanish that will be a challenge,” Osman said.

In New York City, where the archdiocese enlisted additional planning and leadership skills of former American Express executive Albert Kelley, who served as CEO of the 2014 Super Bowl event, church officials are responsible for five papal events at four sites. The U.N. papal event is being managed by the United Nations.

Pope Francis will attend an interreligious prayer service at the National September 11 Memorial & Museum at the World Trade Center site, meet with small groups at the St. Patrick’s Cathedral and a Catholic elementary school in East Harlem, and celebrate a Mass at Madison Square Garden.

“In all of our planning we are trying to maximize the time the Holy Father has to interact with people and we kept the furnishings at the sites very simple,” said Joseph Zwilling, the archdiocesan director of communications.

“The Holy Father wants to have an encounter with people, he wants to learn about us and how the church operates in New York and the United States, and we want to give him a real understanding of our inner city schools, immigrant populations, of what we do for newcomers to our country and of how faith communities can coexist,” Zwilling said.

The visit, he added, touches every aspect of the New York Archdiocese — from special fund raising, to parishes awaiting tickets for his appearance, to Catholic praying for his visit and for Cardinal Timothy M. Dolan, “who is eagerly awaiting the pope,” Zwilling said.

NEXT: New auxiliary bishops have years of institutional, pastoral experience