Presence of Hispanics ‘a blessing’ for church, says professor 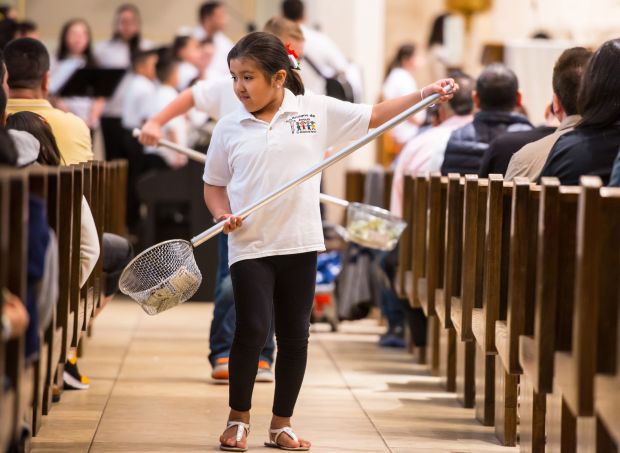 “How do we evangelize, how do we hand on the faith that we have received to the next generation of Catholics that will be transforming the American Catholic experience in this century,” he said.

Ospino gave a presentation on a major study conducted by Boston College on Catholic parishes with Hispanic ministry. The principal investigator the study, he was a speaker at a symposium on Hispanic leadership and philanthropy in the 21st-century church held at the University of the Incarnate Word.

The first-of-its-kind gathering drew Hispanic and other Catholic leaders from across the nation to San Antonio June 25.

It was co-sponsored by Foundations and Donors Interested in Catholic Activities, known as FADICA; the National Leadership Roundtable on Church Management; and the Mexican American Catholic College.

The Boston College study was conducted from 2011 to 2014, and surveyed dioceses, organizations and pastoral leaders. It identified 4,362 parishes nationwide serving Hispanic Catholics, and focused on leadership issues and how the growing number of Latina/Latino children are being evangelized and educated in the church.

“From the beginning of Catholicism in the United States,” said Ospino, “there has always been growth in the Catholic religion in terms of numbers.”

Most parishes in this country, he related, were established in the Northeast and the Midwest because that was where incoming immigrants settled, establishing Catholic schools in the process.

Today the vast majority of Catholic schools, universities and resources can be found in these regions. However, those two regions are now where Catholicism is experiencing its biggest decline, with increased numbers in terms of aging and loss of resources. The growth of Catholicism today is primarily in the South and West, because of the presence of two fast-growing groups — Hispanics and Asians, with Asians being the fastest growing population in those regions.

But resources for Catholic ministry are highly concentrated in places where Catholicism is decreasing, according to Ospino, and resources are lacking in the areas where it is growing the fastest.

A survey asking pastors what was their biggest concern found that aging and finances topped the list in the Northeast and Midwest, while in the South and West the answer was parking. “They don’t have enough places to accommodate all the Latinos,” he said.

Hispanics in the United States are not a problem for the Catholic Church, he emphasized.

“We are not a problem to be solved,” he said. “We are a blessing, and the bishops of the United States have repeated this many, many times.” The study found several illustrations of what the Latino presence brings to Catholic parishes.

There also is growth in Hispanic ministry in terms of the permanent diaconate, with close to 3,000 in this at present — a number estimated to double in 10 years.

However, Hispanic Catholics are struggling in such programs, Ospino said, because they do not have the financial resources to be educated and trained, so there is a strong need for philanthropy investment here.

“Half of all Catholics in this country enrolled in ministerial programs or ministerial formation programs are Hispanic,” noted Ospino. What we need to do, he said, is get them into pathways for pastoral institutes, seminaries, houses of formation and universities.

He discussed the energy Hispanic Catholics bring to parish life. In Catholic parishes with Hispanic ministry, two-thirds of baptisms and first communions and half of all confirmations are Hispanic children.

“There is a lot of vitality in their religious education programs,” he noted.

Doing the study, he was surprised to discover waiting lists for religious education programs in Texas and California, with as many as 1,200 to 1,500 children waiting to be enrolled.

“If those kids do not get enrolled in religious education programs now,” he added, “they will be without catechesis all through the rest of their youth.”

The Hispanic presence is inviting the Catholic Church to reinvent itself in many ways, Ospino said.

Established by immigrants, the Catholic Church by the mid-20th century had become a mostly middle-class church, he said, moving away from social services such as soup kitchens and classes in English as a second language, known as ESL.

Ospino’s own parish, in one of poorest cities of New England, was in an Irish community until the 1990s. Today, the parish has one of the largest social services networks in the city, serving 500 meals daily to the needy. It has ESL classes and immigration assistance programs and steers young people to college education.

“That’s the energy,” he said, “that Hispanic Catholicism is bringing into our communities and helping us to reinvent ourselves.”

He highlighted areas where he said Catholic philanthropy can make a difference: developing pastoral leadership; investing in resources to meet the needs of Hispanics in the church; and helping Latinos get a Catholic education.

“If we are going to have any impact in the life of Catholicism in the near future,” he said emphatically, “we need to turn our attention quickly to our Hispanic youth.”

Sowa is a staff writer at Today’s Catholic, newspaper of the Archdiocese of San Antonio.