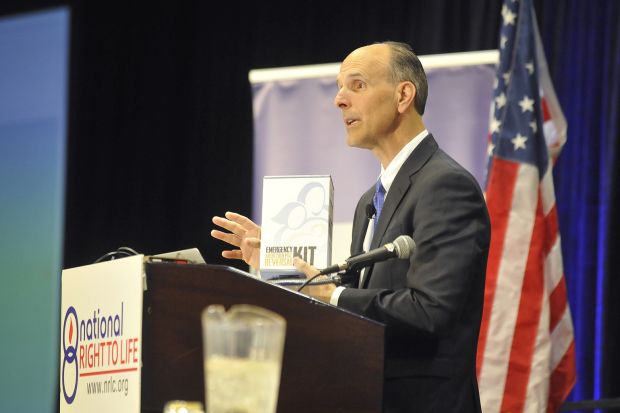 NEW ORLEANS (CNS) — While the annual number of abortions in the U.S. has dropped from a high of 1.6 million in 1990 to about 1.06 million today, the number of chemical abortions through the use of RU-486 has increased and now represents about 25 percent of all abortions.

But Dr. George Delgado, medical director of Culture of Life Family Health Care, said July 9 during the National Right to Life Convention in New Orleans that the abortifacient effects of RU-486 — known generically as mifepristone — can be safely reversed about 55 percent of the time by administering a high-dose progesterone protocol, preferably within 24 hours after a woman has taken the abortion pill.

“Time is of the essence,” Delgado told the 800 attendees at the July 9-11 conference. “This is new science, not junk science. There is a window of opportunity to reverse it. We want to go out and spread the word and tell everyone in the community that we have the ability to reverse RU-486.”

Delgado gave a detailed report on his findings.

Essentially, mifepristone works as a “progesterone receptor antagonist,” which effectively blocks all the effects of progesterone, “which is essential for a healthy pregnancy,” he said. Progesterone works to prepare “a rich, luxurious lining” of the uterus, allowing the embryo a nutrient-rich environment in which to develop.

RU-486 was approved for use in the U.S. in 2008 and now represents about 18 to 25 percent of all U.S. abortions, Delgado said. That figure is about 75 percent in some European countries, which permitted the use of RU-486 earlier.

“The proponents of medical-induced abortion hailed this as a ‘Holy Grail,'” Delgado said. “They were effusive in their praise for mifepristone when it was coming on the market, because, of course, they wanted to take the abortion procedure and the abortion decision out of the purview of doctors and of clinics and make it as personal and private as possible, so a woman could have her abortion in the privacy of her own home without anybody interfering or trying to dissuade her or talk to her rationally about what she was doing.”

Delgado said RU-486 has led to “telemedicine” abortions in which women sometimes “don’t have to physically see a medical professional and can have a medical abortion in their own homes. Your sidewalk counselor can’t be in front of every person’s home trying to tell the women about the truth of the life that’s in her womb.”

“Telemedicine” involves a patient being prescribed abortion pills without any doctor being physically present. The patient goes to a clinic and consults with a doctor via webcam; the doctor remotely activates a drawer in an examination room that opens to provide the woman with abortion drugs.

In the case of RU-486, the patient takes the first part of the protocol at the clinic and completes the second part of what is a two-day regimen at home.

But Delgado said while surgical abortions result in ending the unborn child’s life virtually 100 percent of the time, a woman who takes RU-486 can change her mind and deliver a healthy baby.

The key is receiving a large dose of progesterone — about double the amount of the RU-486 — to reverse the effect. Delgado’s studies have shown no harm to the mother or child.

“We don’t have a huge amount of data, but we don’t see that there are any associated birth defects,” he said. “We’re very confident in telling women that right now we have no evidence that mifepristone — RU-486 — causes birth defects.”

Delgado has a website about his research, abortionpillreversal.com, and has a 24-hour hotline available at (877) 558-0333.

Delgado also said interviews with women who have taken the RU-486 abortion pill — only to change their minds about having an abortion — indicate they often are told by the abortion clinic staff that their original decision was irrevocable and changing that decision would be dangerous.

Even if the baby is born, they are told, it would have birth defects.

Delgado said his peer-reviewed studies prove those claims to be false. The abortion pill can be safely reversed.

NEXT: Court rules against Little Sisters’ plea to avoid way to bypass mandate