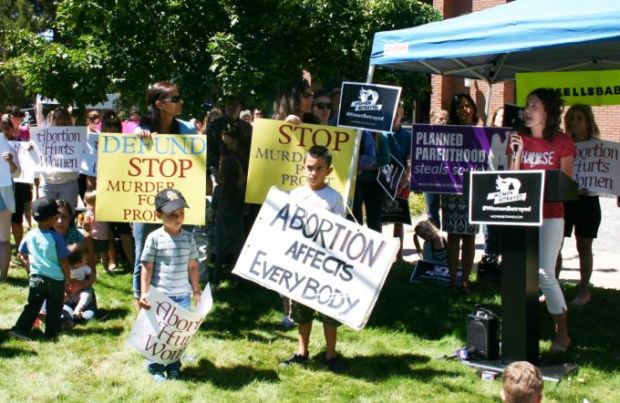 The crowd joined pro-lifers across the nation in holding a “Women Betrayed” rally, an effort organized by Students for Life of America and its partner organization, Pro-Life Future.

Rallies took place in about 65 cities across the nation.

Across the country in Iowa, about 100 people abandoned their lunch hour to publicly witness their opposition to Planned Parenthood. Their “Women Betrayed” rally was held at Mary’s Choice, a pregnancy resource center, located next to Planned Parenthood of the Heartland in Sioux City.

“We came out today to demand that our representatives in Washington, D.C., and Salt Lake City hold Planned Parenthood accountable for their actions, and we are not alone in our fight,” Callie Oppedisano told the Salt Lake City crowd.

She co-chairs the Knights of Columbus pro-life committee with her husband, Joe, at St. John the Baptist Parish in Draper. A local Knights council helped organize the rally. 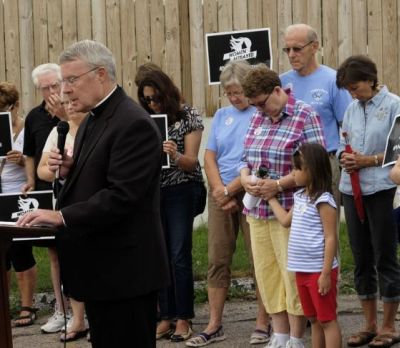 Bishop R. Walker Nickless of Sioux City, Iowa, speaks during a “Women Betrayed” rally in Sioux City July 28. Demonstrations were held in 65 cities across the country calling for an end to federal funding of Planned Parenthood (CNS photo/Jerry L. Mennenga, The Catholic Globe)

“Thousands have gathered with us today to give a voice to the voiceless, and to fight for women who deserve better than abortion,” said Oppedisano. “More than 327,000 babies are killed a year, at a cost of $500 million to taxpayers. The shocking footage that was recently revealed shows (Planned Parenthood) is also selling body parts of precious children for their own profit … a business transaction, not an act of compassion.”

Others speakers at the Salt Lake City rally said they also are committed to abolishing abortion.

Jesse Craig, vice president of Right to Life at the University of Utah, said 94 percent of Planned Parenthood services are dedicated to abortions.

According to 2013 data, the latest available, Planned Parenthood says abortions represent 3 percent of the total services its facilities provide.

Millions of women across the country rely on Planned Parenthood for contraceptive care, many who otherwise couldn’t afford it. Planned Parenthood also provides limited testing for sexually transmitted diseases and cervical cancer screenings.

In Craig’s view, Planned Parenthood’s “main goal is to strip the humanity from a person just because that person is not fully developed and cannot speak in defense of him- or herself,” she said.

“You cannot refer to an unborn baby as a blob of tissue or as less of a person, and then identify parts of that blob as human organs,” Craig said. “You cannot have it both ways or deny the humanity of an unborn baby when its humanity is what makes it valuable. Thankfully, 10 states have already defunded Planned Parenthood, and Utah is not yet one of them.”

Also attending the rally was Sam Akins; he and his wife have five children. They learned from their fourth child, who had a severe heart defect, that “love prevails” when life is given a chance, he told the Intermountain Catholic, newspaper of the Diocese of Salt Lake City.

Before the Akins’ daughter was born, they were given three options: heart reconstructive surgery, palliative care or abortion. Despite fearing the uncertainty of her survival, the stress of caring for her and the financial burden of her high-risk surgeries, the Akinses chose to give birth to their daughter in 2012.

“I knew the moment Rita was born she was given to us to serve a purpose,” Akins said.

“Love prevailed in her death,” Akins said. “We experienced the joy that comes from fully committing ourselves to the care of a child, the blessings of selfless giving from our family, our friends and even strangers; we experienced the miracle of a baby’s undying love.”

They declined to be interviewed for this article but handed out a folder of information about the organization’s services.

In Sioux City, rally-goers chanted back and forth: “Planned Parenthood, Defund” and “Pro-choice, that’s a lie, Babies never choose to die.” They called on the government to stop funding the organization.

Sioux City Bishop R. Walker Nickless opened and closed the event with prayer, thanking God for the opportunity to witness to life.

“I hope that in my time as bishop, and our time here, this building next to us will be closed,” he said.

According to Fred Shellabarger, assistant director of adult catechesis and family life for the Sioux City Diocese, the purpose of the rally was to call on state governments to investigate and defund Planned Parenthood.

“The recent revelations of their illegal sales of the body parts of aborted babies have opened the door for all to see the depravity of the Planned Parenthood business,” he said. “This is the best opportunity we have had to finally end the more than $500 million dollars in annual taxpayer funding to the Abortion Goliath.”

Carol Remer of Battle Creek, who has been a sidewalk counselor outside of Planned Parenthood, emceed the event.

“Scripture tells us the gates of hell won’t prevail, but gates don’t do battle,” she said. “We have come to Planned Parenthood to do battle.”

Iowa state Sen. Bill Anderson, a Republican from Pierson, shared his response to the videos.

“There are many words that came to mind when I saw the videos: saddened, sickened, but not surprised,” he said. “We can no longer explain away Planned Parenthood’s atrocities and their belief in life as a commodity.”

PREVIOUS: Box believed to be Catholic artifact found at site of Jamestown church

NEXT: Congress urged to ensure ‘fair and just wages’ for all workers