In foster families, time may be short but love is abundant 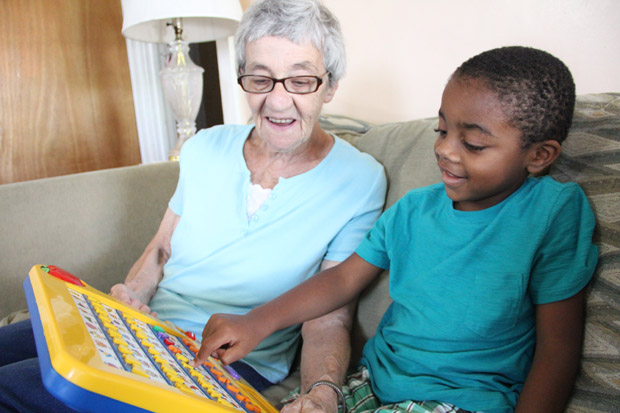 Cecilia Paul plays a game with Jamil, her adopted son, in their Rhawnhurst, Philadelphia home. (Photos by Sarah Webb) 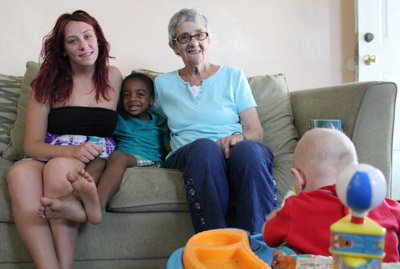 Cecilia Paul, center, enjoys the closeness of family in her home, with daughter Taylor (left) and son Jamil, both of whom she cared for as a foster mother before adopting them. Also brightening the home is her newest charge, an infant boy (lower right). (Sarah Webb)

Families are great, but the sad truth is there are more children than you might think who did not have the good fortune to be born into a stable and loving family. Some of them may be adopted, others may be cared for by loving foster parents and still others just fall through the cracks.

In Philadelphia the Foster Care Program of the Youth Services Division of archdiocesan Catholic Social Services has been keeping the tradition of caring for dependent children in a home setting established by the Catholic Children’s Bureau in past generations.

At this time the CSS Foster Care Program has 122 children in placement, from infancy onward, according to Bob Montoro, administrator of Adoption and Foster Care Services for CSS. One and a half to three years is the average for placement but it can be longer.

Good foster care depends on good foster parents, and among the best are two women with decades of experience as foster mothers.

“I’ve been doing it for 40 some years, I think I’ve had about 124 children,” said Cecilia Paul, 79, a Rhawnhurst resident and member of Resurrection Parish whose heart is as big as her five-bedroom home. Right now she has a little girl, 26 months old, with her the past 22 months and an eight-month-old baby boy. “You never know, it can be a year, two years or two weeks,” she said.

She was a pediatric nurse with six kids of her own — Margaret Mary, Charles, David, Christopher, Cecilia and Agnes — her husband (now deceased) was sick and she really wanted something where she could work from home. Because of her nursing expertise, Catholic Social Services often gave her children that needed very special care. 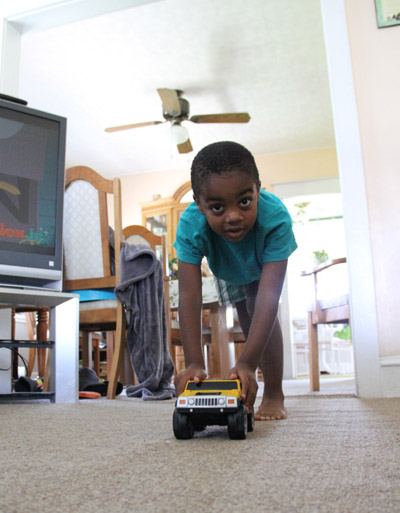 Jamil Paul plays with a toy truck like any boy in the safety of his Northeast Philadelphia home. (Sarah Webb)

When they leave, it might be home to family members, it might be adoption. “You pray for them. I know I don’t have the right to them. Reunification is the goal,” Paul said.

Many of the children she has cared for had traumatic experiences; she enjoys seeing them grow, become more social and try to forget their past. While most of the children to whom she has given love and care she never sees again, “one family that adopted two children keeps in touch with me,” she said.

There are five of the former foster children who will always be in her life. “I adopted them,” she said. “They are Andrew, Thomas, Dontae, Taylor and Jamil.”

Thomas, who is now 30, never knew another parent because he was just three weeks old when he come into Paul’s care. “I think it is great because kids have problems and need help; they need somebody,” he said. “I have a son that is 3 years old but I couldn’t do what she does. It takes a lot of patience and I’ve seen a lot of them who have emotional issues.”

Because of her age her children suggest she should give up foster parenting. She resists the idea. “I want to do it as long as I can,” she said. “It’s my vocation.”

Sharonell Fulton, 71, who lives in the Overbrook Farms section of the city and is a parishioner of St. Barbara Parish, has been doing foster care since 1992. She has cared for about 20 children, she estimates. She had been working in hospice care but was at a time in her life when she was ready for something different.

The first two children she received were brothers, 5 and 7. They had been living with family in an abandoned house and had been severely scalded by boiling water during a fight between adults over food. 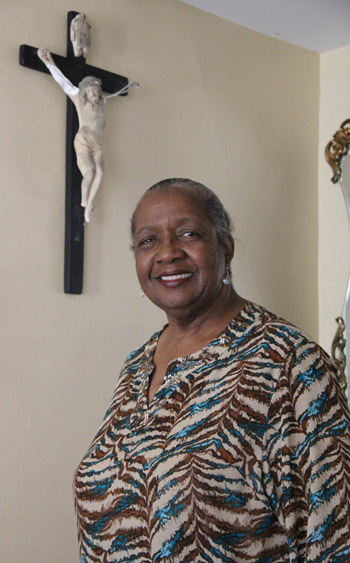 Sharonell Fulton, a member of St. Barbara Parish in Philadelphia, has cared for about 20 foster children in her Overbrook Farms home since 1992. (Sarah Webb)

Because the stipend given for child care doesn’t cover luxuries, Fulton is especially grateful to the St. Joseph Sisters, who helped out over the years with toys and other articles, even a donation of beds when a convent closed.

Sometimes children she receives have been so emotionally damaged they are difficult to control. “I had a 5 year old that threw toys at me every day,” she said. “I would put him in my arms and hold him.”

If needed she would bribe them with donuts, something the social workers thought was wrong. “It works and that’s what my grandmother did when she raised me,” she said.

Most children she could reach. “You know within a month,” she said.  “There are some who need more than I am able to give.”

Another memorable emergency was on a Christmas Eve when four children came to her as an emergency placement after another child in the shelter where they were living starved to death.

Most of her former foster children do keep in touch, but there are tragic exceptions. “Two of the boys I had were later shot and killed,” she said.

Fulton only has a great-grandchild with her now but no foster children, although she is still on the list.

“I’m used to children laughing and running up and down the stairs; when the children aren’t here I feel lost,” she said. “It’s not about money. Anyone who does it just for the money has picked a hard way to earn it.” 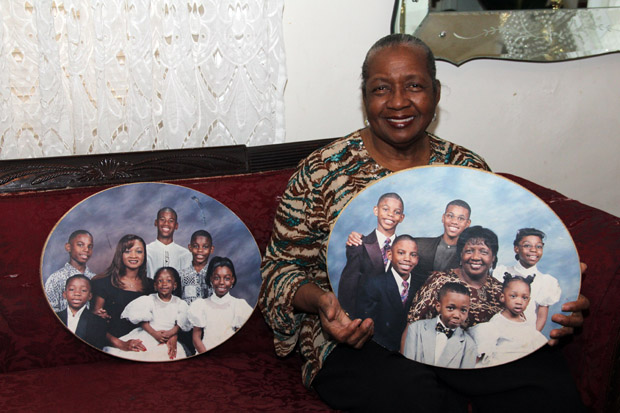 Sharonell Fulton displays pictures of some of the foster children she has cared for over the years. (Sarah Webb)

PREVIOUS: Sisters, married to Christ, live as a family in cloisters

NEXT: He’ll meet the pope, and one wonders, who is luckier?