Sisters, married to Christ, live as a family in cloisters 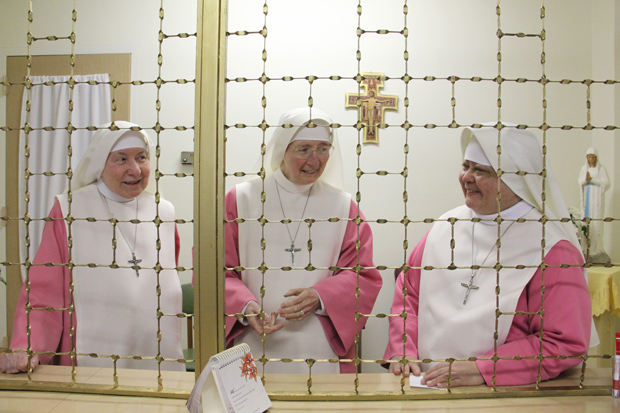 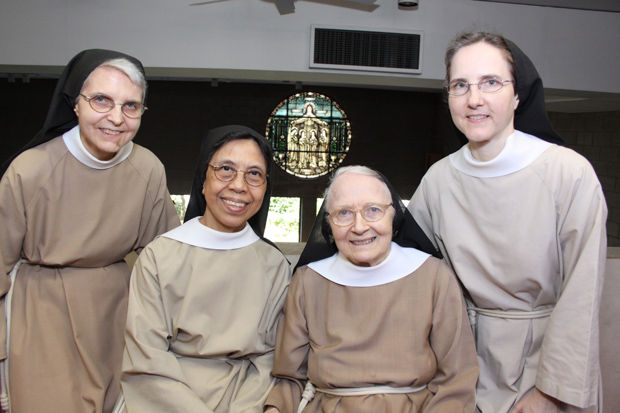 “Build community life, because in the life of the community it is this way, like a family, and it is the Holy Spirit who is in the middle of the community.” — Pope Francis, address to cloistered nuns in Assisi, Oct. 4, 2013.

Cloistered nuns and monks have a unique charism. They leave their birth family and friends and all the distractions of the world for a sequestered life of prayer among a small band of like-minded companions, and in so doing become part of what is in reality a new family.

There are four such monasteries for women in the Philadelphia Archdiocese that practice strict enclosure, where the members live a life of prayer and rarely leave its boundaries other than for such reasons as medical necessity.

They are the Monastery of the Visitation on City Avenue in Philadelphia, the Convent of Divine Love in the city’s Fairmount section, the Discalced Carmelite Monastery in the West Oak Lane neighborhood and the Monastery of St. Clare in Langhorne, Bucks County.

All four, unique in their own right, are best known to the Catholic community at large as powerhouses of intercession before the throne of God to call upon in time of need, places of prayer and for special intentions. Members of the four communities agreed to tell something about their monastery and their own call. 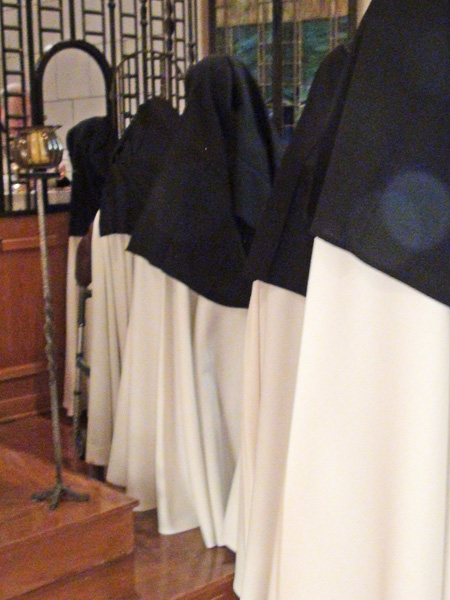 At the Discalced Carmelite Monastery, a nun who in keeping with their charism does not wish to be named (we’ll call her Sister Mary), has been a member of the community for half a century.

Right now there are only six members. They would like more but not too many; St. Teresa of Avila, their greatest saint, thought 13 should be the maximum.

“She deliberately chose 13 because she did not want us to pick friends but to be friends to all, even those who are very different from ourselves,” Sister Mary said. “You were to love and serve one another.”

Sister Mary, who was educated in America and abroad, converted to Catholicism as an adult and slowly came to the realization that God was calling her to religious life. “I didn’t know whether it would be teaching or nursing or what,” she said.

After about eight months she happened to read a biography of St. Teresa, and knew Carmel was where she was meant to be. This was confirmed when she consulted a priest who was known for his sanctity and wisdom. He told her she should absolutely enter.

It was difficult for her to give up the life of perfect freedom of action she was accustomed to, and community living takes getting used to. It was also a time in the Church where many religious were questioning their vocation and leaving.

“Some of the older sisters were so edifying and encouraging, I stayed,” Sister Mary said. “I knew God wanted me here even if the building burned down.”

The sisters are united on the journey. “We help each other and we respect each other even though we are all different,” Sister Mary said.

“Every sister’s story is different, and all are gifts from God. We are content. Although this is our family, we are ready to take off.” 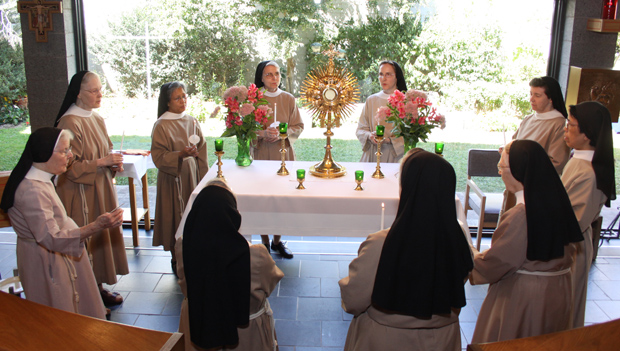 At the Monastery of St. Clare, Sister Jean Therese Rossignol is the abbess, although they do not use the title except in formal documents. They don’t use the title “Mother” either, because “we are sisters to each other,” she said. “One of the important things is our life of prayer. We believe our life of prayer will help others as well. We pray for people who contact us.”

Although in the past at reception, new members would be given a new name symbolizing they were leaving their birth family, it is not a general practice today. In the Poor Clares it is done only if the new sister wishes it. “We don’t relinquish our baptismal names because we realize this is an extension of our baptismal call,” Sister Jean Therese said.

The Poor Clares do not have a motherhouse as such, although all the communities descend from Assisi; each monastery is autonomous under the rule. Because this means strict enclosure family visits are generally limited to three or four times a year, but in many cases it might be less because a sister may have come some distance to join the monastery.

For example, Sister Jean Therese herself is from Maine. Sisters do not leave the monastery for visitation except perhaps in cases of serious illness or family death, she said.

Certainly entering a cloistered order is a radical change, but “It’s the same thing when people get married,” Sister Jean Therese said. “You have a general concept but it is learning to grow together and to understand one another. We have a common vision as to why we are here. We try to focus on Jesus as our spouse, learning to live his way.

“We are individuals with God’s grace and God’s help realizing that God is working through the whole family unit. The aspect of growing with each other is a challenge; it is beautiful, but a growing process.”

Sister Francine Gibbs, who is originally from Hawaii, became a registered nurse in Georgia and worked in Chicago before entering religious life. She first became aware of the Visitation Sisters when in Georgia where she would volunteer at the local monastery. She was a convert to Catholicism and her family wasn’t happy when she chose to enter. “They wanted me to be a preacher or a doctor,” she said.

She wanted a poor monastery that reflected the Holy Family in Nazareth, and sensed this community lived their vow of poverty. Because of her nursing skills she was a welcome addition, as were her cooking skills. But of course the main business of the monastery is prayer.

“We pray, we answer the telephone, listen to prayer requests. We carry everybody’s burden,” she said. “Sometimes people let us know when our prayers are answered.”

Theirs is a small community; just eight sisters counting two in the hospital but not counting the dog and two cats.

“Our superior is our mother,” Sister Francine said. “All of our sisters are her children and the Blessed Sacrament is our child, our love. It’s a simple life; if the furnace breaks we all stay in the same room to keep warm. If a tree falls, we get someone from outside to fix it. We trust in Jesus.

“There is always someone here to support you, to love you. You are not forgotten, you are never alone. God is so good and he really did call me. It is so wonderful to have him as your beloved. I have no regrets.” 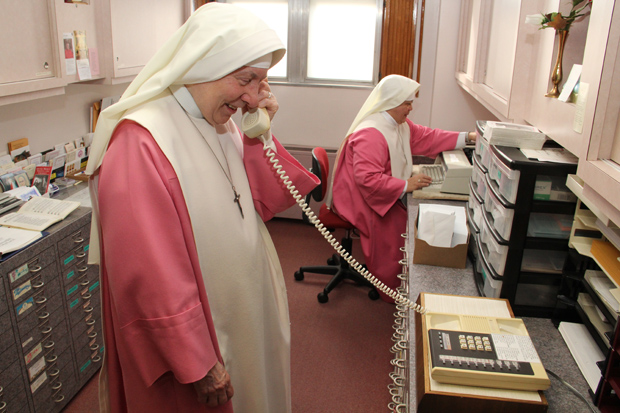 The Sister Servants of the Holy Spirit of Perpetual Adoration (Pink Sisters) have been in Philadelphia at the Convent of Divine Love for a century. Their name comes from their fidelity to around-the-clock adoration of the Blessed Sacrament.

Sister Mary Caritas, the superior for the 20 sisters, has been a member of the congregation for more than half of that time, serving in Missouri, Texas, Nebraska and now Philadelphia since 2009.

She was originally from Akron, Ohio, and a family of teachers. But when she received the call to religious life she knew it was as a contemplative not in a teaching order.

“I felt the Lord was calling me to a life of prayer and reparation in contrast to being a teaching sister,” she said.

Her father raised the question, “Does that mean you won’t be home for my funeral?” That startled her and she replied, “No Dad, I won’t be home but I’ll be praying for you.” He never questioned her vocation, and she forgot all about the question until his death 32 years later. “When people offered me condolences I said now help me keep my promise as I remember my dad in prayer.”

She was young when she entered at 19 after a single year of college. Was the transition difficult? Yes and no. “In those days you didn’t question when someone told you to do something, you didn’t hesitate or give an opinion, you did it,” she said.

As a sister of course she is in a different type of family.

“We are not living here together for ourselves,” Sister Mary Caritas said. “God has called us together, we did not choose one another; it is the same in an ordinary family. You do not choose your parents or your brothers and sisters. God called us together for a reason and we found each other and we will be together in heaven someday. In one way we are closer than blood sisters because we have been together so long.”

NEXT: In foster families, time may be short but love is abundant