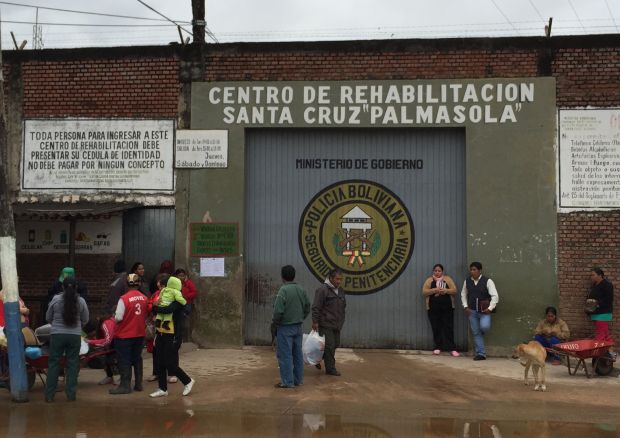 A family pays a wheelbarrow operator to take a box of sandwiches and other care items to a relative inside the Palmasola prison in Santa Cruz, Bolivia, July 8. Pope Francis is scheduled to visit the prison July 10. (CNS photo/David Agren)

SANTA CRUZ, Bolivia (CNS) — Fernando Fernande brought toilet paper, soap and food to the Palmasola prison, where his son has been locked up for the past two years.

Other families waited outside the gates with wheelbarrows full of everything from sausages to blankets to charcoal for cooking. The supplies, Fernande said, were to keep his son clothed, fed and living in hygienic conditions as the prison provides its inmates only with food.

“He gets sick eating in there,” Fernande said, adding that he pays approximately $115 monthly for the upkeep of his son, who he insists is falsely accused of auto theft. “Everything costs money (in there). It’s one big business.”

Pope Francis plans to visit the Palmasola prison July 10, showing his concern for an oft-abandoned, neglected and stigmatized segment of society.

The prison has proved notorious, especially after a 2013 attack that involved flamethrowers fashioned from propane tanks and left 31 inmates dead and 36 badly burned.

The Bolivian bishops’ prison ministry expressed hopes the pope’s visit will call attention to prisons in Bolivia and Latin America at large; often the prisons are plagued by problems such as overcrowding, violence and self-rule by inmates.

“The subject of justice is urgent and needs to be resolved,” said Maria del Carmen Michel, legal adviser to the bishops’ prison ministry. “We hope that the justice system is humanized and that it is available to everyone, the victims and the persons accused and convicted of crimes. We also hope that justice is impartial, timely, prompt and that the persons detained have the right to fair trials and, if convicted and sentenced, live in a dignified way.”

The prison problem is especially acute in Bolivia. The prison ministry published figures earlier this year showing 84 percent of inmates have never been convicted of any crimes and are awaiting an unresponsive and understaffed judicial system to process their cases. The overcrowding rate reached 326 percent. More than 900 children live behind bars with their parents, including in Palmasola.

The situation is so insufferable that inmates plead guilty in exchange for shortened sentences, even though they are innocent, “out of the desperation of overcrowding and everything about the unjust and inhumane system in the prisons,” Father Leonardo da Silvia, Palmasola’s prison chaplain, told the newspaper El Deber. “The pope is a motive for us to take up this topic again.”

Families outside the prison on a rainy afternoon said the prison was split into areas for violent and nonviolent offenders — with those classified as nonviolent not sleeping in cells or being confined to small areas. Some inmates lived with their families, who come and go as they wish. Others have pets or raise animals like chickens.

“It’s not that dangerous,” said Kitty Delgado, whose husband was being released after serving 14 months on drug trafficking charges. But she acknowledged having to provide money to her husband to pay for almost everything on the inside, ranging from food to passage to parts of the prison to having a space to sleep.

“We leave money so he can buy food,” she said. “There are a lot of foreigners (inside) so they open businesses and sell all kinds of different food.”

Aida Carrasco, whose husband is in prison on robbery charges, said she pays $36 a month so her husband can sleep on a mattress in a room with three other inmates.

“If you pay more, you have fewer roommates,” she said.

The payments apply to access to justice, too, Carrasco said, as those with money “pay a lawyer to get them out quickly.”

Michel, the legal adviser, said she hears such stories often. Guards charge families a fee to enter on visiting day. Inmates are made to pay for the transportation to their own trials — or cover the cost of gasoline.

“Poor people are not able to pay this kind of transportation cost,” she said. “When the day of their audience arrives, they never get there.”

The system suffers from underfunding, with almost half of the budget “going to administrative costs,” she said, adding that she hoped the papal visit would prompt some changes.

Before the pope’s visit, judges and prosecutors set up shop in the prison and resolved 250 cases in five days. Some inmates were released and moved to take care of overcrowding.

Fernande, a metalworker by trade, remained skeptical and said he thought soon things would return to the way they were before the pope’s visit was announced.

“It’s total corruption,” he said. “Nothing will change.”

PREVIOUS: Papal visit to home spotlights plight of seniors in many countries

NEXT: Hammer-sickle crucifix raises eyebrows during pope’s visit to Bolivia