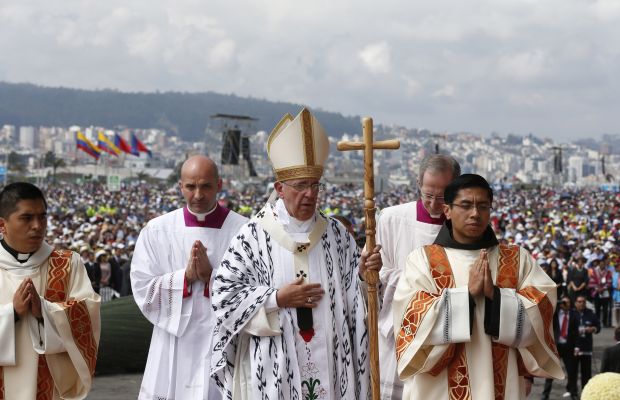 QUITO, Ecuador (CNS) — Catholics will never be effective evangelizers if they are squabbling among themselves, and they cannot show the world how faith in Christ responds to the human yearning for freedom and peace if they are divided, Pope Francis said.

The pope’s Mass July 7 at Quito’s Bicentennial Park was billed as a Mass for evangelization, but the pope insisted Christians would convince no one of the power of the Gospel if they could not demonstrate in their lives and behaviors that faith pushes a person beyond self-interest to concern for others.

“It is precisely into this troubled world that Jesus sends us,” he said. “We must not pretend not to see or claim we do not have the needed resources or that the problems are too big.

“Instead we must respond by taking up the cry of Jesus and accepting the grace and challenge of being builders of unity,” he said.

To evangelize is to live as brothers and sisters with all people, he said. “This is the new revolution — for our faith is always revolutionary — this is our deepest and most enduring cry.”

Local church officials said more than 800,000 people gathered at the park, a former airport, for the Mass. Ecuador is the world’s third-largest exporter of cut flowers and roses are queen — a fact evident from the rose petals strewn along the pope’s path, the flower-petal carpets on the altar platform and the colorful arrangements that decorated even the walkway to the makeshift sacristy behind the stage.

The congregation gathered for the Mass was just as varied; members of different indigenous groups and visitors from other South American countries risked a forecast of rain to pray with each other and with the pope. Pope Francis wore a chasuble with an indigenous design, and the second reading at the Mass was in the Kichwa language.

Margarita Maria Jaramillo Escobar, 58, came with a group of 80 people from Medellin, Colombia, to pray with the pope.

“This is a pilgrimage for us,” said Jaramillo, a retired judge who has been blind since birth. “I came to hear the Holy Father’s message of love, peace and mercy.”

Those who gather around the altar and share Communion should be united with one another, setting aside worldly desires for power and petty squabbles in order to show the world the peace and unity that comes with faith in Christ, Pope Francis told them.

Evangelization is not beating down people’s doors, he said, but knocking gently and drawing near to “those who are far from God and the church, who feel themselves judged a priori by those who think they are pure and perfect.”

In his homily, reflecting on Jesus’ prayer at the Last Supper that his followers would be one so that the world would believe, Pope Francis said that while Jesus probably said the prayer in hushed tones, he likes to think of it “as more of a shout, a cry rising up from this Mass which we are celebrating in Bicentennial Park.”

“The desire for unity,” he said, “involves the delightful and comforting joy of evangelizing, the conviction that we have an immense treasure to share, one which grows stronger from being shared and becomes ever more sensitive to the needs of others.”

Because of sin, he said, unity takes real effort. It requires a commitment to explicitly trying to include everyone, to avoid selfishness, to promote dialogue and encourage collaboration.

Society needs people committed to unity, the pope said, and so does the church.

“Jesus consecrates us so that we can encounter him personally. And this encounter leads us, in turn, to encounter others, to become involved with the world and to develop a passion for evangelization,” he said.

“Communion, communication, self-giving and love” are the hallmarks of a Christian vocation, he said, and they are what makes it possible to take diversity and differences and turn them into a richness.

“What Jesus proposes is not just an idea,” the pope said. “It is concrete: ‘Go and do the same.'”

Unity is not “something we can fashion as we will, setting conditions, choosing who can belong and who cannot,” he said. “This ‘religiosity of the elite’ is not what Jesus proposes.” Recognizing God as one’s father means recognizing all his children as brothers and sisters, he said.

“This is not about having the same tastes, the same concerns, the same gifts,” Pope Francis said. “How beautiful it would be if all could admire how much we care for one another, how we encourage and help each other.”

Contributing to this story was Barbara Fraser in Quito.