Educate young to care for others, for the earth, pope tells teachers 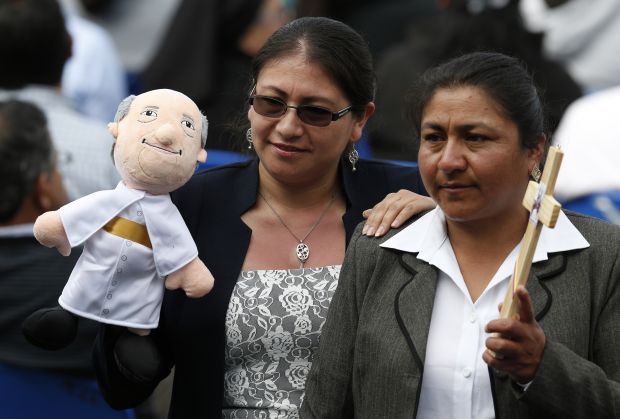 Women pose with a Pope Francis doll before the pope's meeting with representatives of schools and universities at the Pontifical Catholic University of Ecuador in Quito July 7. (CNS photo/Paul Haring)

QUITO, Ecuador (CNS) — Education is a right and a privilege that should impart not only knowledge and skills, but also a sense of responsibility for others and for the earth, Pope Francis told representatives of Ecuadorean schools and universities.

“God gives us not only life, he gives us the earth, he gives us all of creation,” the pope told an estimated 5,000 educators and students gathered for an outdoor meeting at the Pontifical Catholic University of Ecuador.

God created man and woman for each other and gave them huge potential, the pope said July 7, but he also gave them — and gives each person — a mission to be part of his creative work.

“I am giving you seeds, soil, water and sun,” the pope said God tells human beings. God gave people hands and gave them one another; he gave everything as a gift, the pope said.

Quoting from and explaining some of the principles in his encyclical letter on the environment, “Laudato Si’,” the pope said God created the world and everything in it not “so he could see himself reflected in it,” but in order to share it.

“Creation is a gift to be shared,” Pope Francis said. It is the place God gives humanity to exercise its creativity and to build a community of care and concern.

“We are invited not only to share in the work of creation and to cultivate it, but to make it grow and develop it,” he said. At the same time, “we are called to care for it, protect it and be its guardians.”

The balance is delicate and caution is urgent “because of the harm we have inflicted (on the earth) by our irresponsible use and abuse of the goods with which God has endowed it,” the pope said, quoting his encyclical.

“The earth herself, burdened and laid waste, is among the most abandoned and maltreated of our poor,” he said, still quoting.

As he insisted in the encyclical, Pope Francis told the educators and students that care for the environment is not an isolated moral issue. “There is a relationship between our life and that of mother earth, between the way we live and the gift we have received from God.”

Selfishness, consumerism, a desire for money and power, a lack of respect for God’s design for all of creation — human beings included — have a negative impact on people and on the environment, he said.

“Just as both can ‘deteriorate,’ we can also say that they can support one another and can be changed for the better.”

Pope Francis said people cannot ignore what is happening around them or pretend that it has no impact on them. Rather, he said, “it is urgent that we keep reflecting on and talking about our current situation” and take action.

Without action, the pope said, people are like the Old Testament Cain, who killed his brother Abel, and when God asked Cain where Abel was, he replied, “Am I my brother’s keeper?”

“I wonder if our answer continues to be ‘Am I my brother’s keeper?'” the pope said.

“We have received this earth as an inheritance, a gift, in trust,” he said. “We would do well to ask ourselves: What kind of world do we want to leave behind? What meaning or direction do we want to give to our lives? Why have we been put here?”

Those questions should be part of the educational process, the pope said.

“How do we help our young people not to see a university degree as synonymous with higher status, money and social prestige?” he asked. “How can we help make their education a sign of greater responsibility in the face of today’s problems,” especially responding to “the needs of the poor, concern for the environment?”

The pope spoke at the university at the end of his second full day in Ecuador. After visiting a home for the aged and meeting with religious July 8, he was to fly to Bolivia, then onto Paraguay July 10, before leaving for the Vatican July 12.

NEXT: In democracy, all groups must have voice, pope tells Ecuadorean leaders