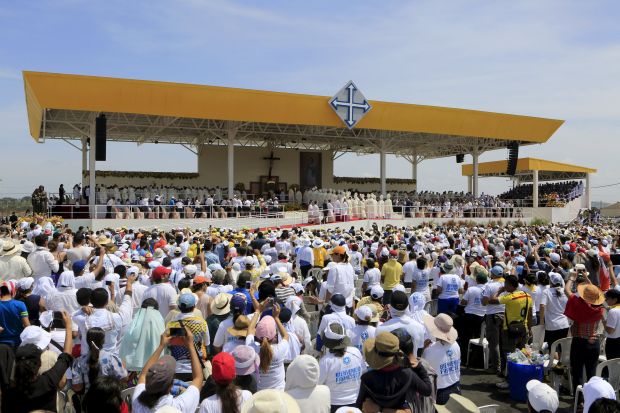 GUAYAQUIL, Ecuador (CNS) — Even if a pastoral proposal for helping a Catholic family with problems seems scandalous at first, it is possible God could use that proposal to bring healing and holiness, Pope Francis said.

Encouraging and celebrating family life during a Mass July 6 in Guayaquil, Pope Francis asked people to pray for the October Synod of Bishops on the family, and he tied the synod to the Jubilee of Mercy, a yearlong celebration that will begin in December.

The synod will be a time for the church to “deepen her spiritual discernment and consider concrete solutions to the many difficult and significant challenges facing families in our time,” the pope said.

Celebrating Mass with as many as 1 million people gathered under the hot sun in Los Samanes Park, Pope Francis asked them “to pray fervently for this intention, so that Christ can take even what might seem to us impure, scandalous or threatening, and turn it — by making it part of his ‘hour’ — into a miracle. Families today need this miracle!”

Jesuit Father Federico Lombardi, Vatican spokesman, told reporters Pope Francis was not referring to any specific proposal discussed in anticipation of the synod; one of the most common — and most debated pastoral suggestions — was to develop a process or “penitential path” for divorced and civilly remarried Catholics who want to receive Communion but have not received an annulment.

Pope Francis acknowledged the suffering and hope of young people who do not experience happiness and love at home, the “many women, sad and lonely,” who wonder how their love “slipped away,” and the elderly who feel cast aside.

In a family, “no one is rejected; all have the same value,” he said, telling the crowd that when he asked his own mother which of her five children she loved best, she would say that they were like her five fingers: all were important and if one finger was hurt, the pain would be the same as if another finger was hurt.

The Gospel reading at the Mass recounted the story of the wedding feast at Cana where the wine ran out and Mary asked Jesus to do something about it. Jesus turned water into wine.

Despite the 90-degree heat, the 78-year-old pope was upbeat during the Mass and confident — even cheerful and playful — in his homily about the family.

The joy of the wedding feast at Cana, he said, began when Mary was attentive to the needs of others “and acted sensibly and courageously.”

“Mary is not a ‘demanding’ mother, a mother-in-law who revels in our lack of experience, our mistakes and the things we forget to do,” he said. “Mary is a mother! She is there, attentive and concerned.”

As with the guests at the Cana wedding, who were offered the finest wine at the end of the celebration, Pope Francis insisted, so, too, for families today “the richest, deepest and most beautiful things are yet to come.”

“The time is coming when we will taste love daily, when our children will come to appreciate the home we share and our elderly will be present each day in the joys of life,” he said. “The finest of wines will come for every person who stakes everything on love.”

Pope Francis said he knows “all the variables and statistics which say otherwise,” but “the best wine is yet to come for those who today feel hopelessly lost.”

“Whisper it to the hopeless and the loveless,” the pope urged.

The whole story of God’s involvement with humanity, he said, demonstrates that he always seeks out those on the margins of society, “those who have run out of wine, those who drink only of discouragement.”

Jesus, he said, will provide flasks of the finest wine “for those who, for whatever reason, feel that all their jars have been broken.”

Strong families, he said, help build strong individuals and strong societies. They are the place where “our hearts find rest in strong, fruitful and joyful love.” Families teach people to be attentive to the needs of others and to place those needs ahead of one’s own.

“Service is the sign of true love,” he said.

When the church asks governments to assist families, he said, it is not asking for “alms,” but rather payment of the “social debt” societies owe to families.

PREVIOUS: From Argentina, an exodus to see Pope Francis in Paraguay, Bolivia

NEXT: Prominent Jesuit, murdered in ’80, hailed for aiding Bolivian democracy