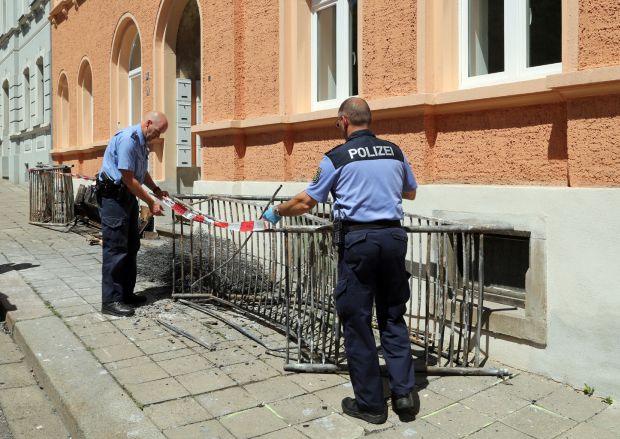 Two police officers set up a barrier in front of a building June 28 after a fire destroyed a reception center for asylum seekers in Meissen, Germany. (CNS photo/Roland Halkasch, EPA)

Cardinal Reinhard Marx of Munich-Freising, president of the German bishops’ conference, said the attack revealed that “some groups” were trying to “sow hatred” against migrants.

The July 16 incident in the Bavarian town of Reichertshofen, is the latest in a wave of attacks against hostels for asylum seekers as anti-immigration sentiments rise in Germany in the face of unprecedented numbers of asylum applications.

Noting that there have been 150 attacks against centers for refugees and asylum seekers in the first half of 2015, Cardinal Marx said the church must make clear its opposition to such “hatred and violence.”

“Some groups are trying to poison the climate in our society and to sow hatred,” Cardinal Marx said in a July 17 statement posted on the websites of the bishops’ conference and the Archdiocese of Munich-Freising. “We must never tolerate this.”

The building in Reichertshofen was being converted into a hostel for up to 67 asylum seekers and was expected to open in September. It was unoccupied at the time of the attack. Officials estimated damage at $160,000.

About 1,200 of the 7,780 residents of the town, located 40 miles north of Munich in the Diocese of Eichstatt, had signed a petition against the project.

Earlier in July, shots were fired over two nights at a converted hotel being used as a hostel for 150 refugees in Bohlen in Saxony. Firebomb attacks have also been reported in other parts of the eastern German state, including in the towns of Hoyerswerda and Meissen in June.

Acknowledging that the number of refugees entering Germany had significantly increased since 2013, Cardinal Marx said people are risking their lives to fleeing war and conflict in the Middle East and Africa for the peace and security of Europe and other nations.

Germany is expecting an influx of 450,000 refugees and asylum seekers this year, which is more than double the number of those who arrived in 2014.

In Bavaria, four new reception centers are being added to the three already existing, but towns and villages are being asked to find accommodation for refugees once their applications have been processed.

“For many of them, it’s not the first priority to obtain good living conditions, but simply to survive,” he said.

“No ifs and buts — these refugees, many of them traumatized, are entitled to have protection and care,” he continued.

The threats and attacks against the refugees, he said, testified to “enormous brutality that must never be accepted by our society.”

“Those who remain silent in the face of recent events and look away, betray our right values,” the cardinal said. “We must make our position clear against hatred and violence.”

“There is no shadow of a doubt,” he added. “Where refugees are threatened, the church is at their side.”

NEXT: Seeing struggles of people is key during papal visits, pope says