Nepal’s new constitution in making should be ‘secular,’ church urges 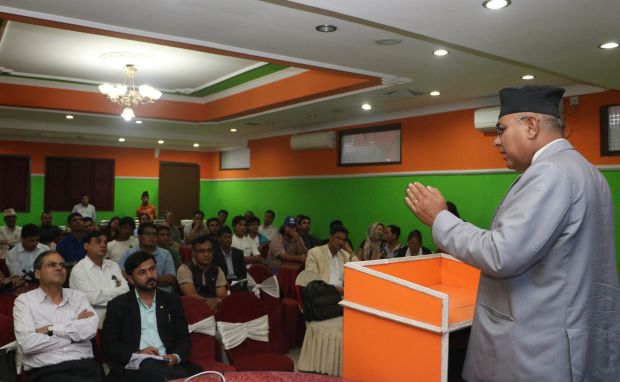 Lokmani Dhakal, one of the four Christians in Nepal's 601-member Constituent Assembly, briefs Christian leaders about the pitfalls in the new constitution at an ecumenical conference in Kathmandu July 6. (CNS photo/Anto Akkara)

KATHMANDU, Nepal (CNS) — As Nepal hurries to promulgate a new constitution, the Catholic Church has urged that the document should be “secular” amid calls by Hindu nationalists that it should establish a “Hindu nation.”

The Apostolic Vicariate of Nepal sent a memorandum July 12 to the major parties in the country’s ruling coalition urging that that the word ‘secular’ be inserted in the constitution’s preamble to ensure full religious freedom. It also demanded Christianity be recognized as a religion.

“Hence, churches cannot be registered as a legal body, and we cannot buy property. We are severely handicapped by this,” Father Bogati said.

Though the draft constitution has an article on freedom of religion, Father Bogati said that “reiterating the secular character in the constitution is crucial to upholding complete religious freedom.”

The memorandum comes as Nepalese leaders work to finalize and circulate the delayed constitution. The government has said it wants the new constitution adopted in early August.

Government officials and the 601 members of the Second Constituent Assembly have fanned out across Nepal in recent days with 200,000 copies of the draft constitution seeking reactions and recommendations.

Meanwhile, Protestant and evangelical groups have organized a series of advocacy meetings designed to ensure that the new constitution would guarantee religious freedom.

Nepal’s centuries-old Hindu monarchy was ended by a people’s uprising led by Maoists in 2006. Since then, Nepal has been writing a new constitution. The First Constituent Assembly dissolved in 2012 after failing to finalize a new constitution.

Father Bogati said the government had signed an agreement with the ecumenical Christian Federation, to which the Catholic Church belongs, to recognize the fundamental rights of Christians.

“One major demand has been for allotment of land for cemeteries,” he said.

Because of the strong cultural prejudice against burial in the former Hindu kingdom, there have been instances of Christian bodies — buried in private lands — being dug up and thrown out by local residents.

Father Ignatius Rai, vicar of Assumption Church in Lalitpur, the largest Catholic Church in Nepal, told CNS the parish has been forced to erect dozens of cubicles within its compound to keep urns of the dead after cremation.

PREVIOUS: Bishop: Vatican is free to work with everyone, UN is not the ‘devil’